No longer merely the domain of armchair athletes and wanna-be jocks, fantasy sports has become a big business. Fantasy sports gives the player the power to create their perfect team and then manage their team based on real life statistics. Players manage their teams through out the normal season to win prizes and even bet on the out come of the fantasy games. Below we have compiled a graphic on some of the top fantasy sports sites, legality, and some facts on how fast the the industry is growing. Every sports fan knows the thrills and agonies of following a favorite team or player’s performances: we love to share their success, and imagine their sorrow. Imagine being a sports fan who not only stakes his pride on every match’s outcome, but also his pocketbook!

Welcome to the world of the sports bettor, where every win more than pays for its celebratory round of drinks and every loss has to be carefully concealed if you value marital tranquility. Before diving into such a high-pressured hobby, check out some of these great movies to get a feel for its giddy highs and crushing lows. 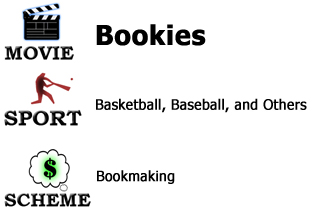 In a light nod to the desperation of gambling, there’s a great scene at the end where one of the characters bets on a foosball match – not for money, but to win back his girlfriend. 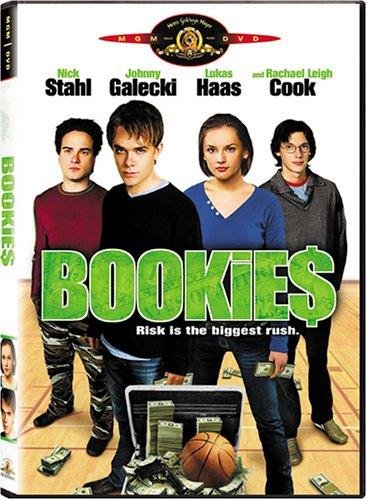 Bookies is a small independent film with such a great story that it holds up even without big name actors. Three college buddies decide to start a bookmaking business, taking bets from all comers. They struggle to keep their venture a secret, to avoid complications with their campus and relationships. As they start really raking in the dough, it becomes impossible for them to keep their bookmaking under wraps. Serious consequences come their way when the mob catches wind of their operation, forcing them into a major gamble of their own. 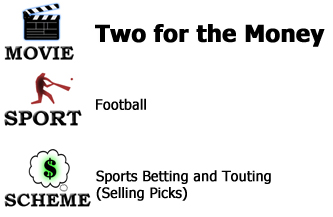 Al Pacino and Matthew McConaughey duel in both sports and acting chops in this film, with Renee Russo adding smolder factor. A college ball player sustains an injury that keeps him from the big leagues, but he retains his sharp quarterback’s instinct for the flow of the game. These instincts earned on the field make him an accurate sports bettor, and this talent eventually lands him a job with a powerful gambling advising agency. His gambling tout boss—the Jim Cramer of the sports betting world—is just a little too clever for his own good, and seems to be running a con. 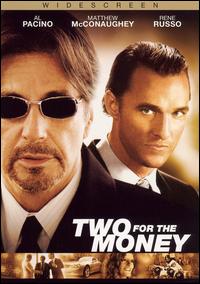 You can’t go wrong with a movie with Al Pacino, Matthew McConaughey, and Rene Russo, but Two for the Money didn’t turn out to be a good bet for ticket sales. Possibly the sports betting theme was a unfamiliar to audiences, but the film is held in high regard for its veracity by those in the know. The DVD is worth checking out, as it features details of multibillion dollar dirty dealings that didn’t make it into the story. Notably, online gambling company Bodog sponsored the premiere release of this film. 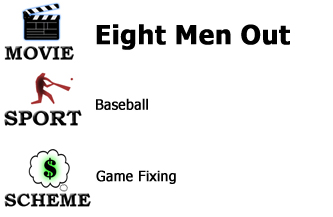 While the game-fixing scandal that earned the team the moniker of the “Black Sox” rocked the baseball world with corruption, the movies focuses on the actions of two players who ultimately decide their honor is not for sale. Not letting the facts get in the way of a good story, the movie was well-received despite deviating slightly from the historical truths. 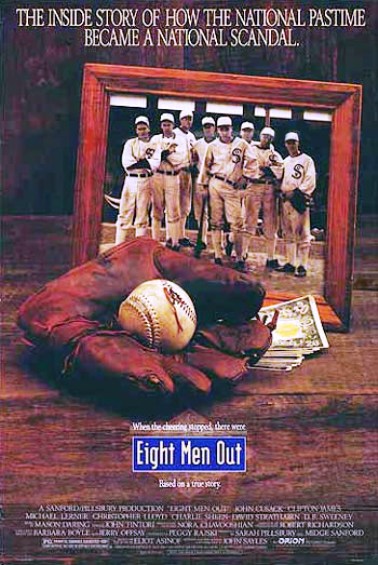 As much as the outlandish salaries of professional athletes is said to degrade sportsmanship, the alternative—paying players peanuts—definitely causes its own problems. In 1919, many members of the Chicago White Sox entered into a shady deal with Arnold Rothstein, head of a gambling syndicate, because Rothstein was going to pay the players more for losing the World Series than the team owner was going to pay them for winning it! 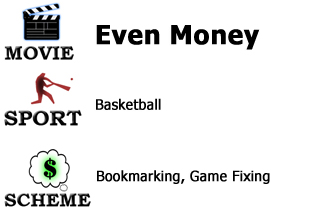 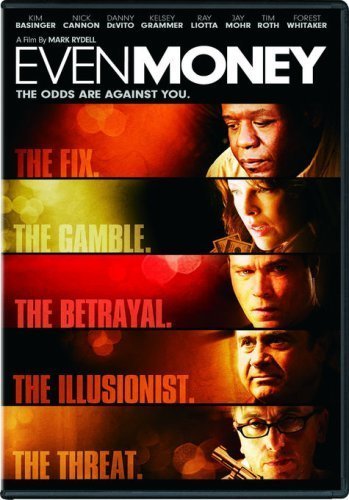 This movie has a complicated story revolving around several key characters: a woman with a gambling addiction, a detective investigating a gambling racket, a mysterious mobster, and an inveterate gambler with the “good” fortune of having a brother who happens to be a basketball star. The player agrees to shave points to help out his brother, and fortunes are made and lost betting on the outcomes of the games. 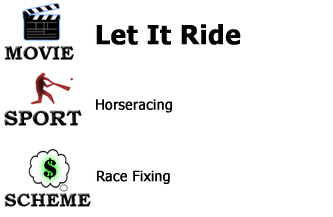 Let It Ride is a comedy, a welcome change of pace to all the crime, thriller, and I’ve-lost-everything stress of most films made about sports betting. 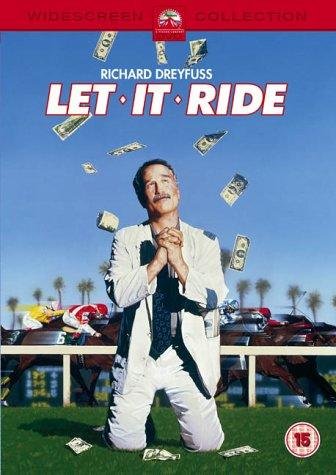 A gambler of no great success decides to have one last flutter on the ponies (mostly to get his wife off his back about his gambling). He has what he thinks is an inside line – a tape of two men discussing a fix in an upcoming race. This begins an incredible streak of luck that turns him from a lovable loser into a legendary winner. It’s a perfect part for Richard Dreyfus, and the movie does a great job of capturing the thrill of winning big at the track. 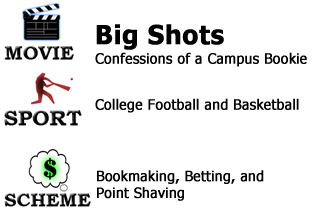 The production ran into financial difficulties and couldn’t afford to hire extras for the final game scenes, so if you look you’ll see a good chunk of the crowd is made up of cardboard cut-outs! Worth a watch just to spot them, they’re hysterical. 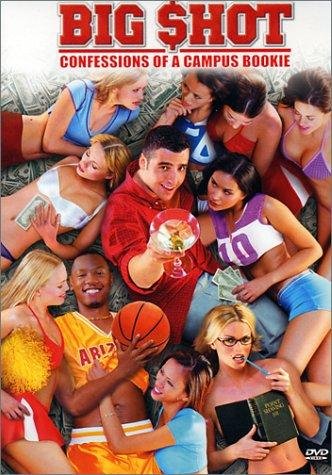 A guy from Brooklyn goes to study economics at Arizona State University and, being keen on money, a bit of a whiz-kid at math, and in close proximity to Las Vegas, gets involved in the gambling scene. He gets hired by a bookie before setting up a successful book of his own, and it isn’t long before he finds himself lured into the seedy side of the industry: fixing games and mixing with criminals. The movie is based on the true story of Benny Silman, the student who won and lost a fortune fixing basketball games with the point-shaving help of one of ASU’s star players, Stevin “Hedake” Smith. 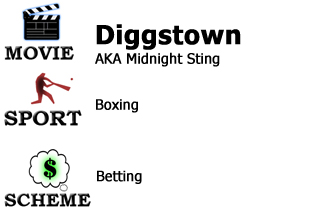 James Woods as a fast-talking con man? Fuggedaboudit. A con man proposes a grand bet: that an aging heavyweight champ can knock-out ten other boxers from Diggstown (a town that’s basically a large boxing fan-boy convention) within a day. The stakes are high (a cool one and a half thousand) and the man on the other side of the bet is a real villain. 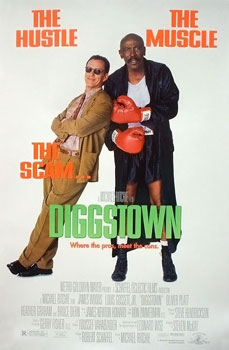 This is a classic sting movie that really gets you rooting for the good guys (or the sly con man and the reluctant champ, in this case). It’s a great film with plenty of scams, double-crosses, and twists that keep you guessing throughout, including the ending – will the plan come together or have they overplayed their hand?

Through the years a lot of excellent films have been made about bettors, bookies, and the criminals who are involved in fixed games. The films listed here are some of the best ever made! For anyone who is interested in the topic, gambling money on a few rounds of a sport is the ultimate thrill. Unfortunately, these movies can never come close to that level of thrill, even though they are an entertaining insight into sports betting!

From mouthwatering delicacies in the southern states, to the typical Americana fare that is offered across the country, NFL concessions offer foods that stop our hearts (sometimes literally)! Find out which stadiums have the best grub, and which are notorious for their sub-par amenities.