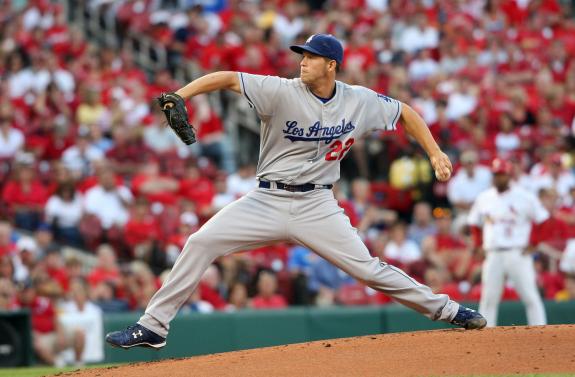 The St. Louis Cardinals (67-61) host the Los Angeles Dodgers (58-69) in Game 2 of a 3-game set tonight at Busch Stadium in St. Louis, Missouri. While the Dodgers likely won’t have a chance of making the playoffs this year, sitting 10.5 games out of 1st place in the NL West and without a quality batting order, they’ll look to further trouble the Cardinals this evening as St. Louis finds itself 9 games out of 1st in the NL Central with the Milwaukee Brewers continuing to pull away.

Trying to pull the St. Louis Cardinals out of a recent funk of 5 losses in 7 outings will be Kyle Lohse (10-7, 3.33 ERA), who looks to building on a solid outing last week consisting of 7 innings with only 2 runs allowed in a 7-2 win at Pittsburgh. He’s 3-0 with a 2.53 ERA in his last 4 starts and pitched well against the Dodgers in his only start against them (7 1/3 innings, 2 runs allowed, 6 strike outs).
Lohse may benefit from Los Angeles’ Clayton Kershaw (15-5, 2.60 ERA) facing one of the only lineups he’s struggled against this season.

Kershaw’s last outing against the Cards resulted in 5 runs allowed over 4 2/3 innings of work in a 9-2 Dodger loss. However, you may consider chalking that up to a fluke performance, as otherwise Kershaw has been one of the only bright spots for the Dodgers this season and has gone 3-1 with a 2.01 record in August, and 7-1 with a 1.33 ERA in his last 8 outings.

Los Angeles seeks its first back-to- back wins at St. Louis since 2003, while both teams desperately try to climb out of their current tough spells (St. Louis losing 5 of their last 7, LA losing 5 of their last 8). Though St. Louis has more than enough firepower in its lineup with Matt Holliday, Lance Berkman and Albert Pujols providing the boost, Kershaw proves difficult for any lineup, especially one mired in a slump.
Los Angeles is the favorite on odds of -115 due to Kershaw’s presence, while Kyle Lohse and St. Louis are +105 underdogs at home. St. Louis gets 1.5 runs at -155, while Los Angeles gives up 1.5 runs at +135. Judging by last nights’ 2-1 finish, with two even more talented pitchers on the mound tonight we may see a continuation of low scoring, hence the low over/under at 7 runs (under -120, over EVEN money).

Whenever we’ve bet against Kershaw this season, things seem to not fare well (considering he’s won 15 of his 20 decisions this year, that would make some sense to a normal person). I’m not making the same mistake again, and will look for Kershaw to get redemption from his tough loss against St. Louis earlier in the season.

James Loney, 1B – Loney is hitting .356 in August with 2 homers and 6 RBIs. He comes off a 3-for-4 outing last night and a 4-for-4 outing the day before at Colorado, so look for this guy to be a producer tonight as well.

Albert Pujols, 1B – Is there a discussion about St. Louis that doesn’t include this guy? I think not, and it’s because he’s continuing his usual tear down the home stretch of the season, hitting .317 in August with 7 homers and 12 RBIs. Though his .289 batting average is down off his career marks (.328) due to a rough start to the season and injury, his 31 homers and 77 RBIs are very impressive considering he’s missed 20 games this year. For this match-up, note that Pujols has gone 7-for-15, for a .467 average.