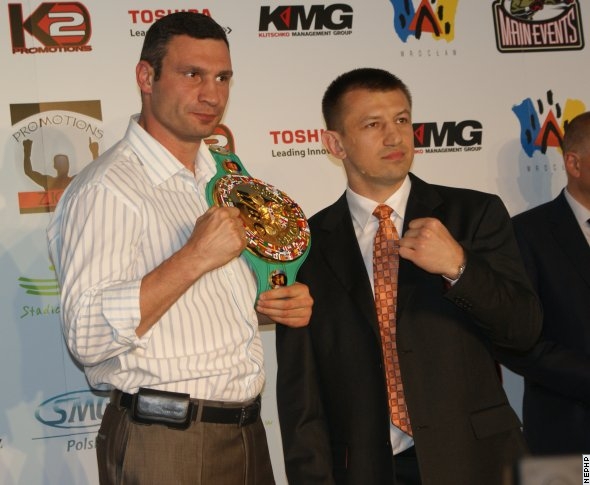 September 10th, 2011 will be an exciting day in the world of Professional Boxing, as Vitali Klitschko (42-2, 39 KO’s), the #1 ranked World Boxing Council heavyweight champion, faces Tomasz Adamek (44-1, 28 KO’s) in a Polish showdown from Wroclaw Stadium with the winner walking away with the WBC Heavyweight Championship.

While this fight certainly sounds like a strong match-up when viewing records, and taking into consideration that the challenger Adamek is fighting in his home country of Poland behind what will be a staunchly pro-Adamek audience, the more detailed tale of the tape tells a much different story, and one that doesn’t bode well for the Góral (Granite Chin).

Tomasz Adamek comes into the fight giving up almost 8 inches in height to Klitschko (6’2″ vs. 6’8″), and 30 pounds in weight, but perhaps most importantly comes in 5 inches shy in the reach category (80 inches for Klitschko vs. 75 for Adamek). Though Adamek comes off a unanimous decision win over the 6’6″, 285-pound Kevin McBride, the much faster and harder punching Klitschko could spell problems when Tomasz Adamek tries to come into the midsection to make his punches count. One big right hand connection from Vitali Klitschko could see this fight end early, so it’s essential that if Adamek is to overcome in this match-up, he’ll need to stay nimble and be prepared to withstand some crushing blows (which thankfully he’s known for). Not surprisingly however, most boxing writers and analysts give Adamek little chance at taking the crown away at home, coming in as a +400 underdog at Bodog Sportsbook. However, don’t expect to see Adamek roll over in this one, as his drive to capture a title at home is strong, his 6-0 record since moving up into the heavyweight division is no joke for a guy his size, and his strategy for using speed and stamina could pay off in later rounds…the only question being if he will make it that long.

Vitali Klitschko on the other hand certainly earns respect as far as online sports betting goes, commanding an early -600 odds to win at Bodog Sportsbook. In what could potentially be his last bout as a professional boxer, seeing the larger, more exciting brother of the Klitschko family in the ring for the last time is something that shouldn’t be missed, and there really isn’t any question that even at 40 years old Klitschko can stand toe-to-toe with any man in the heavyweight division. In fact his likely decision to retire has more to do with a lack of talent in his weight class, as if anything he’s gotten better as the years roll on, having never been knocked down in his career and has never been behind in a fight (his only loss coming in 2003 to Lennox Lewis, due to a nasty cut in a bout he was leading).

In the conclusion of the WBC Heavyweight bout scheduled for September, 10th, we fully expect to see Vitali Klitschko close out what has been an exciting career with a victory on the Polish fighter’s home turf. Though Adamek is sticking to a philosophy that speed and stamina can prevail against the larger, harder-hitting Ukrainian, the one problem with that thinking is to discount the abilities and stamina Klitschko himself possesses. If there is one fighter who has been consistently in top-form before every match, it is Klitschko, and while Adamek may be called the one with the granite chin, expect Klitschko’s to be just as sturdy, but further out of reach. Before the boxing great Vitali Klitschko moves onward in life behind his Ph.D and political leadership of the Ukrainian Democratic Alliance for Reform Party, get set for a great competition featuring his brawn, not brains, to deliver a final win to cap a storied career in professional boxing.