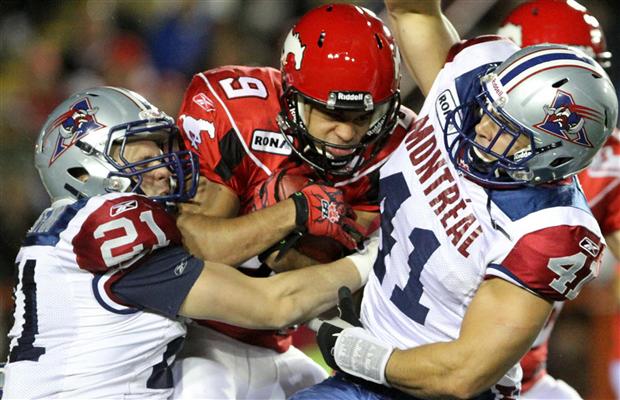 The West Division-leading Calgary Stampeders (5-2) play host to East Division foes the Montreal Alouettes (5-2) on Saturday afternoon from McMahon Stadium. Calgary stands in a two-team race for the Western Division with the Edmonton Eskimos (5-3), as the two teams are the only competition over .500, with both the BC Lions (2-6) and Saskatchewan Roughriders (1-7) already well out of contention this season. Calgary has won 3 straight games and 5 of their last 6, though will play for the first time since August 12th. Meanwhile the Montreal Alouettes will try to up their win streak to 3 games as well, while keeping pace with the East Division-leading Winnipeg Blue Bombers (7-1), who have won 5 straight games. Tonight’s match-up will feature two of the best QB’s in the league as Henry Burris of the Stampeders faces veteran QB Anthony Calvillo of the Alouettes, but the focus may be on the defensive side of the ball, with the Stampeders coming off a 45-35 win over the last-placed Saskatchewan Roughriders despite giving up a shocking 543 yards to the worst team in the league. Montreal on the other hand has one of the best defenses in the league, holding opponents to a league-low 156 points against them, but also leads the league in scoring (31.7 points per game) and overall offense (412.9 yards per game) behind Calvillo, who continues to chase after just about every standing record in CFL passing history.

However, heading into tonight’s match-up, these two teams match up as well as any two teams in the league at the moment, with two impressive offenses and stout defenses in action. Though Calgary comes off their worst defensive performance of the year, that likely seems to be a fluke considering they’ve only allowed 172 points on the season (3rd in the CFL), and are 2nd in league in yards allowed per game (331.7). They also find themselves second in scoring (27.7 ppg) and total yards (376.9) in the league right behind Montreal, so if anything is tell-tale this evening, it’s that scoring will likely not be too hard to come by. No doubt the focus is once again on Montreal’s QB Anthony Calvillo, who has a 106.2 passer rating, leads the league with 14 touchdown passes, and is 3rd with 2,095 passing yards on the season. His two main weapons, S.J. Green (592 yards, 3 TDs) and Jamel Richardson (567 yards, 5 TDs) continue to be a burden on any secondary, but with the league-leading rusher Brandon Whitaker (566 yards) also keeping defenses honest, Montreal is a very formidable offensive threat to say the least. Calgary does match-up pretty well at QB with 13-year veteran Henry Burris throwing for 2,040 yards and 10 TDs on the season, but lacks the same offensive punch provided by the running game, with leading rusher Joffrey Reynolds only posting 339 yards this season after six consecutive seasons with over 1,200 yards rushing.

For online sports betting on this afternoon’s featured CFL match-up, Sportsbetting.ag sportsbook holds the Calgary Stampeders as the favored team to win at -120 odds on the money line. The visiting Alouettes get EVEN money on the money line, in a tilt to a high probability that this game could swing either way. More to that point, the points spread on the game finds Calgary with 1 point given up, while Montreal gets 1 point, and the over/under for the game at 54.5 points also shows the expectation that this game could yield plenty of offensive firepower. Expecting an exciting game today, Calgary will look to improve its lackluster home record of just 1-2, while Montreal tries to improve to 3-1 on the road with a victory at McMahon Stadium today. Montreal has emerged victorious in 3 of the last 4 meetings between the two teams, and comes in off a 46-19 crushing of the Stampeders last October. With the Alouettes clicking on all cylinders offensively behind Anthony Calvillo and his wealth of weaponry, I’ll take a stand to see Montreal prevail on EVEN money, and expect a high-scoring game to favor them on the road. Either way you wager on today’s CFL match-up, you can count on plenty of big-time plays and plenty of bang for your buck in this game between two of the best teams in CFL competition this season.