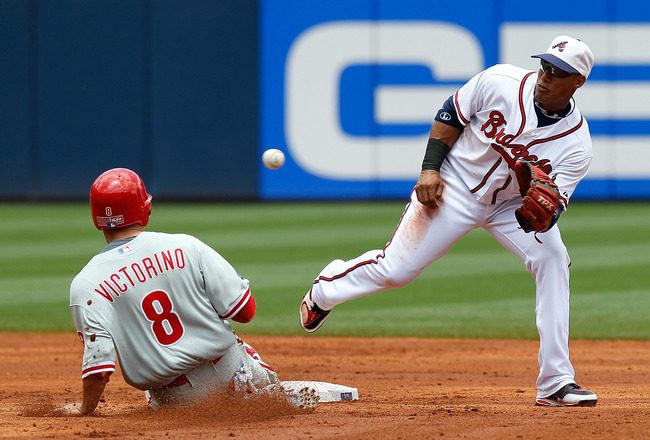 The Philadelphia Phillies (90-48) host the Atlanta Braves (82-59) for the final game of a 3-game series between the top two teams in the National League East division. While Atlanta still maintains a solid 7 1/2 game lead in the NL Wild Card race over the San Francisco Giants, their chance for overtaking Philadelphia in the NL East is quickly slipping away, especially after having dropped the first two games of this series to the Phillies and only 21 games left to make up a 9 1/2 game deficit. On the flipside, Philadelphia comes into this final game of the series with a solid cushion as their starters are clicking on all cylinders down the home stretch, and find themselves very likely to secure a playoff spot in the next two weeks needing only 6 more wins to do so. More importantly for them though is the NL East Pennant, and securing home field advantage for the playoffs, which could be accomplished in just 13 more wins after a victory tonight.

The pitching match-up for tonight’s conclusion of this 3-game series is a good one, as Atlanta puts out Brandon Beachy (7-2, 3.37 ERA) against Roy Oswalt (7-8, 3.80 ERA). After dropping the first two games by a total of 15-3, Beachy will need to be much sharper than both Tim Hudson and Derek Lowe were, and could certainly benefit from some better run support against Oswalt in order to keep from being swept in a series for the first time this season. Beachy will also need to improve on his own past performances against Philadelphia this season, amassing an 0-1 record with a 5.79 ERA in 14 innings while allowing 9 runs. Oswalt will face Atlanta for the first time since April 9th, when he gave up 2 runs in 6 innings during a 10-2 romp of the Braves at Turner Field in Atlanta.

Betting lines for the Philadelphia Phillies vs. Atlanta Braves:

Roy Oswalt and the Phillies are favored at Oddsmaker sportsbook (read the review of Oddsmaker.com) with -125 odds on the money line, while Brandon Beachy and the visiting Atlanta Braves are +115 underdogs. Atlanta gets 1.5 runs at -195 price while Philadelphia gives up 1.5 runs at +165, in an indication that Atlanta should at least keep this game close within reach as they try to save face on the road and avoid getting swept out of town by the NL East leaders. The over/under for tonight’s featured ESPN game stands at 8 runs, with -115 for the over total and -105 for the under.

When Philadelphia is hot at home, they tend to stay that way especially when the Phillies’ bats are producing. With 15 runs for the home team already in two games of this series, we can’t expect Beachy to hold up to that kind of offensive pressure, especially when the Braves’ bats aren’t helping out their own cause. Though I like the under bet on total runs as Beachy has a solid road outing tonight (keeping in mind he also comes off a 2-3 loss on July 8th, giving up just 2 runs in 6 innings), Oswalt will get more support at the plate and pick up the win at home to sweep the Braves out of town.

Alex Gonzalez, SS – Though he’s hitting just .230 on the season, he’s 12-for-27 against Oswalt (.444 average), and is hitting .333 so far in September. He’ll likely be on base tonight, but it’ll depend on the bigger bats in the Atlanta lineup to make sure to knock him in.

Dan Uggla, 2B – Uggla has been owned by Oswalt, hitting just 3-for-22 lifetime against him, but comes in to tonight’s match-up hitting .350 for the month, and .319 with 9 homers and 17 RBIs in the past 30 days. Being one of the only sources of Braves’ power right now, he’ll need to step up tonight against Roy Oswalt if the Braves are to avoid a sweep.

Hunter Pence, RF – Pence is 12-for-26 (.462) versus Atlanta this season, and will face Beachy for the first time in his career tonight. After going 2-for-4 and 2-for-3 in the first two games of this series, you can likely expect more of the same in Game 3.

Raul Ibanez, LF – Ibanez is possibly one of the most inconsistent hitters month-to-month, but when he’s hot, he’s hot. He’s hitting .353 to start off September, and is 5-for-10 against Beachy, so expect Ibanez to add to the power department in tonight’s game.