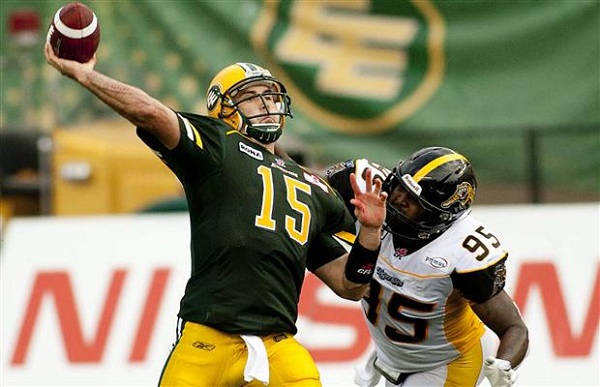 The Edmonton Eskimos (6-4) head east to take on the Hamilton Tiger Cats (5-5) at 7:30 PM Eastern Time at Ivor Wynne Stadium, with both teams looking to bounce back from recent losses, and restore their chances for playoff spots during the second half of the season.
After starting the year 5-0, Edmonton has lost significant ground going 1-5 in their last 6 games, mostly due to a lack of scoring offense, and an anemic rushing attack. Riding the first 5 victories of the season behind quarterback Ricky Ray and his main weapon of choice Fred Stamps, the veteran QB has faltered a little bit due to interceptions, generating 345 passing yards last game against Calgary, but failing to find the endzone with either Stamps, or Adarius Bowman, who caught 4 passes for 133 yards during the 30-20 loss. The pressure will be on the running game in Friday’s match-up with Hamilton, as Ricky Ray needs to return to his comfort zone behind center. 42 yards of total running offense, which was generated last week against the Roughriders, simply needs to be improved upon for the league’s worst run offense, if Edmonton is to stand a chance at victory on the road against the TiCats.

Speaking of Hamilton, they are looking for more consistency from a week-to-week basis, coming off a pair of games against Montreal which saw them win game 1 at home on September 5th 44-21, then turn around and get wiped out on the road by a score of 43-13. Having traded wins and losses for 6 straight weeks now, the TiCats have similar problems as the Eskimos do with run production this season, amassing just 39 yards on 8 carries in their most recent loss to the Alouettes. Failing to score a major in the last game as well as QB Kerry Glenn posted an awful night going 13-for-33 passing, with 151 yards, Hamilton will look for a more balanced offensive attack against an Edmonton team facing the same struggles as they are.

Edmonton defeated Hamilton in the first match-up of the season on July, 28-10 at home, which puts the regular-season series at a record of 51-28-1 in favor of the Eskimos.

Betting Lines for Edmonton vs. Hamilton:

Hamilton has been strong this year at home, going 4-1. As such, they are the favorite to win on Friday, with TopBet Sportsbook (read the review of TopBet.com) giving them -235 odds to win. Edmonton hasn’t fared poorly on the road this season, amassing a 3-2 record away, but with their continual inability to score majors, the Eskimos march into the game against the TiCats as +195 underdogs. Hamilton gives up 5 points on the spread at -110 price, while Edmonton gets 5 points at the same -110 price. The Over/Under for the Friday night showdown in Ontario stands at 50.5 points, which is heavily influenced by Hamilton posting a 32.8 point average at home this season along with Edmonton’s 24.2 point average on the road.

We’d assume that something has to give in at least one of the running games this Friday, but that might be asking too much with two teams struggling to find footing in the second half of the CFL season. While I like Ricky Ray’s veteran leadership of the Eskimos, the confidence hit that Edmonton has taken in the last 5 games favors a victory for Hamilton tonight in a place where the TiCats play their best ball. Hamilton is second in the league in scoring, and if they can get running back Avon Cobourne back in the mix on Friday night (3rd in the league rushing with 623 yards and 6 TDs), it’s going to be tough for Edmonton to squeeze out a road win. I like Hamilton to cover the points spread at home, and emerge victorious 33-16.

Avon Cobourne, RB – The long-time Alouette back has been solid this season, and with the running game coming off its worst performance of the season, look for Cobourne’s number to get plenty of calls, and likely a TD to boot.

Chris Williams, WR – Kerry Glenn will need to find the TiCats’ leading receiver more often to balance out the offensive attack against a pretty solid Edmonton defensive unit. In his first year, Williams has impressed many, with 736 yards receiving on 43 catches and 4 TDs. Look for him to be a factor at home on Friday night.

Jerome Messam, RB – After a strong start during the Eskimos’ 5-game winning streak to being the season, Messam has been very quiet rushing for just 19 yards on 6 carries against Calgary last Friday, and 51 yards on 14 rumbles against them 4 days before that. Rushing for negative yards in 2 of his last 4 outings, Messam is under pressure to improve in Friday’s match-up if Edmonton wishes to stand any chance of winning.

Ricky Ray, QB – Ray is the heart and soul of the Eskimos’ offense, and the veteran QB needs to be more confident in his passing to a talented group of receivers. It wouldn’t help if the running game helped take some focus off Ray in this match-up, and if they do look for Ray to chew up the Hamilton secondary for a big night.