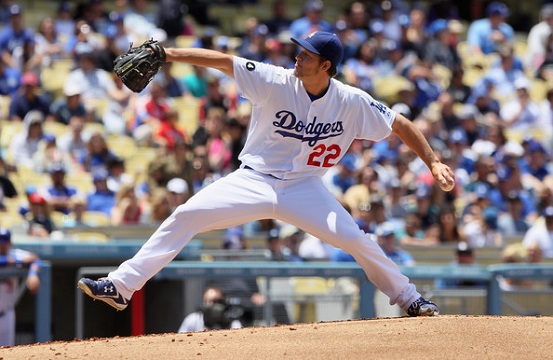 A rematch of the September 9th meeting between the San Francisco Giants (83-70) and the Los Angeles Dodgers (76-76) takes place this evening with the venues switched up and Los Angeles playing host tonight from Dodgers Stadium in sunny Los Angeles, California. The San Francisco Giants find themselves in much better shape than when these two teams met last, riding a season-high 8 game win streak and now just 5.5 games back in the NL West Pennant race with the 1st place Arizona Diamondbacks. The Giants will look tonight to win 9 games in a row for the first time since early 2004, but in order to do that they’ll have to get past the most dominant pitcher they’ve faced all season long. Though the Dodgers are basically done with their season already, there is pride at stake to stay above .500 during a year of tumultuous ownership, and there’s no doubt that against the Giants the Dodgers will be gunning to spoil the hopes of last year’s World Series champs in this three game series starting today.

Clayton Kershaw (19-5, 2.30 ERA) look to continue his case for an NL Cy Young award this season, and tonight he could become the first Dodger pitcher in over 20 years to win 20 games. Kershaw will also look to add another impressive feat to an outstanding season, by becoming the first pitcher ever to go 5-0 in a single season against the Giants. His numbers are for lack of a better term, just gross. Kershaw is 6-0 in his last 7 games with a 0.71 ERA. He’s won 7 straight at home, is 10-0 with a 1.46 ERA in his last 13 home starts, and against the Giants he has a career 1.26 ERA.

Facing Tim Lincecum (13-12, 2.59 ERA) today will be another challenge, but one Kershaw overcame just 11 days ago. However, the former Cy Young award winner continues to improve down the home stretch, as he gave up just 1 run in 8 innings of a 2-1 loss to the Dodgers on the 9th, and pitched brilliantly on the 14th against the San Diego Padres throwing 7 scoreless innings in a 3-1 win. Though sporting a 1.65 ERA against the Dodgers this season, he’s 0-2 against them in 4 starts, most likely due to outstanding opposing pitching whenever he takes the mound.

Oddsmaker sportsbook (<a href=”https://www.casinoreview.org/sports_betting/oddsmaker.html”>read the review of Oddsmaker.com</a>) offers up the San Francisco Giants as a +115 underdog on the road, while the home team Dodgers are a -125 favorite to win tonight behind Clayton Kershaw and his magic arm. As was the case in the last match-up between Lincecum and Kershaw, the over/under stands at 5.5 runs, which went under on Sept. 9th in a 3-1 final score. With the -105 odds on the under bet, it could be a solid opportunity to go that direction once again with both pitchers throwing their best right now. Find Los Angeles giving up 1.5 runs at +185 on the points spread, while San Fran gets 1.5 runs at -165 odds.

Once again it’s extremely hard to bet against Clayton Kershaw, especially at home where he has been near flawless. The Giants are playing the best ball of the season right now however, something that really wasn’t the case a week and a half ago. Still, if I’ve learned anything this year, it’s that you don’t bet against Mr. Kershaw. Ever. In another brilliant outing for both pitchers, once again I pick Kershaw to walk away victorious, earning his 20th win on the season at home as the Dodgers prevail 3-2.

Matt Kemp, CF – Kemp is having an MVP year, hitting .318 with 32 home runs and 107 RBIs with 37 steals. However, he’s only hitting .192 (5-for-26) lifetime against Lincecum, something the Dodgers would like to see improve tonight on the road.

James Loney, 1B – Hitting .353 in the past 2 weeks, Loney has been a solid contributor for Los Angeles down the stretch. Unsurprisingly, he’s also struggled against Lincecum hitting just .182 for his career, so look for Loney to try and step up with some better production tonight, and in this series.

Pablo Sandoval, 3B – San Francisco slugger Pablo Sandoval is coming off a big set of games over the weekend, batting 7-for-12 with 3 home runs and 6 RBIs during the Giants’ sweep of Colorado. Hitting .476 in the last 7 days with 7 RBIs, .364 for September, and now .310 on the season, look for Sandoval to be a contributor this evening in Los Angeles.

Carlos Beltran, RF – Beltran is back on the PTW, hitting .448 in the past 7 days, and .426 for the month of September with 4 jacks and 12 RBIs. He’s still looking for that first hit against Kershaw however, going 0-for-9 lifetime against him.

James Loney, 1B – Guy is straight smoking right now. Coming off a career best 5-for-6 evening two days ago, Loney is now hitting .339 for September, and will look to carry over his outstanding weekend (8-for-11, 9 RBIs during the Dodgers’ three-game win streak) against the Giants this week.