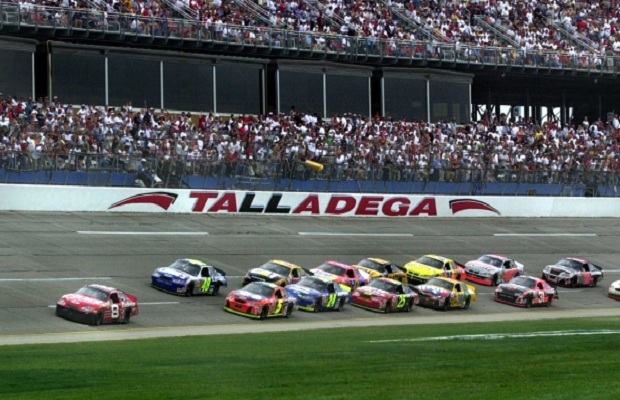 The 2011 NASCAR Sprint Cup Championship race has certainly been an intriguing battle this year, as so many drivers remain in the hunt for the Chase, and without a doubt the 500-mile grind at Talladega Speedway for the Good Sam Club 500 this Sunday, October 23rd will be a race well worth watching and wagering on at one of the best online sportsbooks reviewed here. With the Good Sam Club 500 typically being one of the defining races in the Chase for the Championship playoffs, there’s no doubt that plenty of race-day drama, the unavoidable heartbreaking crashes, and eventually an ecstatic winner will give race fans something to cheer about come Sunday, and all the reasons for you non-race fans to hop online, wager on the best suited driver for Sunday, and watch the action unfold towards the pinnacle of what has been one of the best seasons of NASCAR racing in recent memory.

With Jimmie Johnson entering this Sunday’s race holding on to just a slim chance a repeating as Series champion for a sixth straight time this season, it’s all on the line for the driver of the #48 Chevrolet, who finished 34th in last weekend’s Bank of America 500 after a scary crash, and dropped 5 positions in the points standing to 8th. Johnson will need a culmination of a good finish and some bad luck from other top drivers, as the pack continues to chase points leader Carl Edwards, who sits 5 points north of Kevin Harvick with five races left on the season. Also in the hunt for the Championship are the usual suspects consisting of Matt Kenseth (-7 points), Kyle Busch (-18), Tony Stewart (-24), to name a few of the top drivers who will be racing aggressively on Sunday to try and overtake the lead heading into the final few races of the season. Without a doubt, Sunday’s race between the top competitors in the Chase series becomes all the more interesting in light of recent events in IndyCar racing, where Dan Wheldon suffered a tragic loss of life due to excessive attainable speeds in Las Vegas last weekend, and changes in NASCAR’s rulebook regarding larger restrictor plates and no lubrication for bumpers could change up how cars draft with one another come race day. With both the safety of drivers as well as the desire to push a more aggressive race in the 500-mile Good Sam Club showdown, no doubt something will have to give this weekend, which for race fans means even more excitement when enjoying the sport from a spectator position.

Betting Lines for the Good Sam Club 500 at Bodog.eu Sportsbook

After winning 5 times at Talladega over his career and finishing 4th here in April, many are picking Dale Earnhardt Jr. as the eventual winner, with Bodog Sportsbook giving him 9/1 odds of seeing the checkered flag first on Sunday. Kevin Harvick, #2 in the points standings and winner of the 2010 race here, also looks to be a good bet for Talladega after finishing 5th there in April. Usually one of the better race strategists, Harvick could benefit from the new rules in place and a more safety-focused race day ahead, adapting better than most to the on-track changes in racing conditions. At 10/1 odds, Harvick is our pick to win Talladega this weekend, as we’ll bet he’s able to avoid getting caught up in at least one of the pile-ups sure to happen at this race track. For further top sports betting picks on the Good Sam Club 500, find Jimmie Johnson at 11/1 odds in what could be his last stand to reclaim his championship crown again, Jeff Gordon (6-time winner) who is out of the Chase picture -66 points back but looks decent at 12/1 odds, or perhaps even look to an outside shot like A.J. Allmendinger, who has yet to win a race but comes in at 45/1 odds despite being the only driver to finish in the Top 11 three times in restrictor plate races (no one has finished 10th or better in all three races this season). It could be a chance to cash in on a long shot at Talladega as this year’s NASCAR Sprint Cup Series has seen plenty of new winners like Marcos Ambrose, David Ragan, Regan Smith and Paul Renard all take the podium for the first time, so do a little research on Sunday’s race, pick your best driver or drivers to make the action all that much more exciting, and enjoy the one of the final races in what has been an exciting and intriguing season of NASCAR racing!