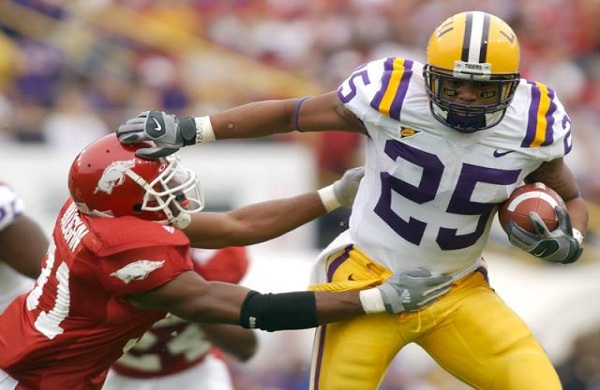 NCAA Football fans get the top sports betting action one day early this week, as the #1-ranked LSU Tigers (11-0, 7-0 SEC) host the #3-ranked Arkansas Razorbacks (10-1, 6-1 SEC) in the biggest remaining match-up on this year’s College Football calendar. With the winner lining up as the SEC’s Western Division champion for the SEC Championship game slated for next weekend, there’s plenty at stake between these two top schools which no doubt will make for a great opportunity for online sports betting today.

With LSU setting its sights on becoming one of just two teams to finish the regular season undefeated (the other being #8 Houston, which benefits from playing lowly Conference USA teams), tonight’s game is without a doubt the biggest of the year for Tigers’ head coach Les Miles, and the nation’s top ranked defense. Allowing a miniscule 10 points per game to opposing offenses, LSU has built a legacy around being able to shutdown even the most potent of offenses, as was very much apparent in their 9-6 OT win over then-#2 Alabama three weeks ago. Combined with an offense that is putting up 37.9 points/game (good for 14th in the FBS), LSU has shown they have arguably the most balanced football team in the nation this season, regardless of who they stack up against. Against a Razorbacks defense tonight that has really leaned on its offensive counterpart to pull them through in close contests, LSU has to take advantage of the weak run defense in front of them, controlling game tempo with the ground attack against an Arkansas D that has struggled this year against the run giving up 17 touchdowns and 164.2 yards/game to opposing running backs through 11 games. With a scrambling, option-style quarterback like Jordan Jefferson calling the plays in today’s game, and the quality sophomore trio of Spencer Ware (650 yards, 7 TDs), Michael Ford (625 yards, 7 TDs) and Alfred Blue (70 carries, 445 yards, 6 TDs) leading the charge for the Tigers, LSU doesn’t have a very exciting game-plan to watch unfold, but nonetheless it has been very effective at controlling the ball for the majority of the game, especially when mated to one of the top defenses in the league that has helped keep opposing offenses off the field.

Arkansas challenge for today’s match-up will center around whether or not they can find success with their downfield passing game, behind their stand-out junior quarterback Tyler Wilson (3215 yards, 21 TDs, 63.1 percent completion). Against an LSU defense that is allowing just 158.3 yards/game in the air, Wilson is going to have to find creative ways to get the ball into his playmakers’ hands, namely Jarius Wright (61 catches, 1002 yards, 10 TDs) and the elusive Joe Adams (46 catches, 595 yards, 3 TDs). Razorback football is definitely centered around the passing game with 6 players grabbing at least 20 catches this year, and sitting at 10th in the FBS with 316.9 yards per outing, we can all expect Arkansas to push the pass as much as possible in today’s match-up. However, against the shutdown defense of LSU balance is going to be key for Arkansas in tonight’s game, and getting the rushing attack involved could be critical in a scrappy, lower scoring affair tonight. Make no mistake, Arkansas does feature the run, which has amassed 25 touchdowns on the season behind leading backs Dennis Johnson (91 carries, 606 yards, 3 TDs) and Ronnie Wingo Jr. (91 carries, 424 yards, 3 TDs), and in a series where 4 of the last 6 games have been decided by 3 points or less, getting productivity on the ground to prolong ball possession as well as to cap off drives going into the red zone will be essential for the Razorbacks if they are to prevail in a tough road atmosphere at Baton Rouge, LA.

While both teams are certainly able to beat out their competition via offensive attack, this game today will come down to which defense has the better outing, and that clearly gives the advantage in this match-up to the LSU Tigers, who are allowing only 86 yards on the ground and 158 through the air. That is going to cause troubles for the Arkansas offense which has so much success airing the ball out and scoring on big plays, something that LSU is very stingy about giving up. Also take into consideration that LSU has simply dominated conference opponents, holding SEC competitors to a combined 50 points over  games this season. As usual, LSU’s elite secondary is the key to their dominance, with safety Brandon Taylor leading the team in tackles (61), and safety Eric Reid and cornerback Tyrann Mathieu not far behind with 58 tackles apiece. Perhaps even more telling for LSU’s bottom line though has been the fact that the Tigers have scored 6 times on defense and special teams this season, while only allowing 11 total touchdowns to opposing offenses all year long. Smothering and persistent, the Tigers will look to be on their best against a legitimate passing threat like Tyler Wilson, but if they can put together a similar game plan that held Alabama’s AJ McCarron to just 191 yards passing with 1 INT and no TDs, LSU can walk away with another signature win in a record-breaking season.

Betting Lines for #1 LSU vs. #3 Arkansas at Betonline.com

With both teams coming into this game on very good form and looking confident in their hopes for victory this afternoon, it’s somewhat surprising to see Arkansas as such a large underdog on the betting lines at Betonline.com sportsbook today. Coming in with +355 odds to win, the bookmakers certainly aren’t taking into account the recent history between these two teams (Arkansas has won the last 3 of 4 meetings), when giving the favorite to LSU at home with unfavorable -430 odds. Therefore, without any further looks at the money line (which unless you’re taking Arkansas to straight up win will be a waste of time for most), we turn to the match-up against the spread with LSU having to cover 11 1/2 points at -110 odds at home. This could be the area where those wanting to side with the Razorbacks can find traction. With both sides realizing the importance of defense in this game, and with Arkansas having the ability to keep games close via big plays, 11 1/2 points is a lot between two Top 3 teams in the biggest football game of the year for both programs. Further, despite the fact that both LSU and Arkansas are putting up 37.9 and 39.3 points per game respectively this season (ranked right next to each other at 14th and 13th in the FBS), with so much attention on limiting scoring likely to play out, the 53 points on the over/under seems a pretty big margin to cover especially with the game on LSU’s home turf, and Les Miles’ squad looking to completely shut down the Razorbacks offensive weaponry.

While the bookmakers have this game spread out in favor of LSU by quite a wide margin, we think on the national stage with the SEC Western Division title on the line, tonight’s match-up will come down to the final minutes of play, with a touchdown or less separating these two quality teams. With great veteran coaching on both sides of ball used to these types of huge games late in the year, expect a cautious game plan in the first half, with likely little scoring produced in the war of attrition before the second half sees a let-up in defensive stamina. A grinding game has to favor LSU at home behind their rocking crowd, especially if Arkansas is forced to keep its defense on the field for the majority of the contest. Therefore, for the biggest SEC battle of the season today, we’ll back LSU with a close 27-20 victory, but side with Arkansas to keep it close enough to beat the spread with a valiant road effort.