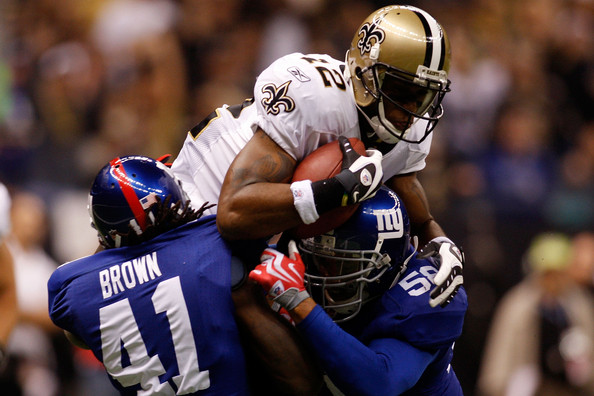 Two former Super Bowl MVP quarterbacks get ready to clash on the national stage for Monday Night Football, as Drew Brees and the NFC South-leading New Orleans Saints (7-3) look to remain perfect at home while the visiting New York Giants (6-4) led by Eli Manning try to avoid dropping their 3rd straight game in a row by overcoming a Saints team that has had their number in recent years.

Coming off a bye week preceded by two clutch wins against divisional foes, the New Orleans Saints seek to parlay their recent success against the New York Giants to hold on to a one-game lead in the NFC South over the Atlanta Falcons. Having won 3 straight games against the Giants by an average score of 22.5 points during Drew Brees’ tenure, New Orleans will definitely have a sense of confidence coming into this match-up tonight, and the eight days off the Saints have gotten may certainly be a key factor against the Giants’ hard-hitting defense that excels at doing damage to opposing offenses. In this match-up against a New York pass rush that has produced a league-leading 31 sacks this season behind talent like Osi Umenyoira, Mathias Kiwanuka, Jason Pierre-Paul and Justin Tuck, it will be interesting to see how Saints head coach Sean Payton concocts a game plan that utilizes both Drew Brees’ ability to quickly find targets downfield as well as the new-found depth at running back, which is averaging 4.6 yards/carry (8th in the NFL) on the season and 117.5 yard/game (14th).

There’s no question that Drew Brees can win ballgames with his throwing ability alone while utilizing a fleet of talented receivers, something he’s done 3 times in a row against the Giants, but with a Saints ground attack that New York has not grown accustomed to yet, even more concerning for New York may be what to expect out of a very diverse backfield running game tonight. With the small and speedy Darren Sproles (51 carries, 348 yards, 2 TDs), the hard-nosed Pierre Thomas (72 carries, 340 yards, 2 TDs) and rookie up-and-comer Mark Ingram (93 carries, 340 yards, 3 TDs) all sharing the load, the New Orleans offense is much more balanced than it has been in the past, which undoubtedly takes plenty of pressure to carry the team off the shoulders of the veteran Brees. Make no mistake however, the Saints are a pass-first type of team; 6 New Orleans players have more than 25 catches, and 5 of them have at least 3 touchdowns, benefitting from another outstanding year by Drew Brees (70.9 completion rate, 3326 yards, 23 TDs, 101.3 QB rating). Leading the receiving bunch this season is tight end Jimmy Graham, who is a match-up nightmare at 6’6″, 260 lbs, but perhaps what is even worse for opposing defenses is his outstanding hands, which can haul in passes the defense simply can’t get to. With 62 catches for 873 yards and 6 TDs, expect Graham’s number to be called early and often, as the Giants are expected to put together plenty of pass rush situations to pressure Brees tonight. However, discounting the deep threat of Marques Colston (42 catches, 589 yards, 3 TDs) or the sure-handed Sproles (60 catches, 448 yards, 3 TDs) in the flats could lead to equal disaster for the Giants, who will have to stay home and cover tightly to avoid getting picked apart by one of the most accurate passers in league history.

The Giants game on the other hand will simply have to center on Eli Manning’s ability to control the passing game, and overcome the lack of offense generated by the New York rushing game, which currently ranks dead last in the NFL at 83.2 yards/game and 3.2 yards/carry. Without leading rusher Ahmad Bradshaw’s presence in the line-up (he’ll be out again for today’s contest, still recovering from a broken foot), big man Brandon Jacobs has not found much success in the backfield as the featured back, as opposing defenses have learned to clog his running lanes and keep him from generating a head of steam. Though the Saints haven’t had the best rushing defense in the league, allowing 121.5/yards per game to opposing running backs, they shouldn’t have too much trouble containing Brandon Jacobs, as the Giants’ revamped offensive line has struggled to create running opportunities and keep opposing defenses out of the backfield, leading to his pedestrian 3.0 yards/carry this year, with no games over 75 yards on the ground.

Perhaps of bigger concern for the Giants tonight is their pass protection, which will need to be on point if Eli Manning is to keep pace with the Saints Drew Brees. Despite being 4th in the league at 281.4 passing yards/game, QB Eli Manning has been constantly hampered by opposing pass rushers lately (sacked 19 times this season), something that has led to their last two defeats against San Francisco and Philadelphia. Against the Philadelphia Eagles and San Francisco 49ers, his production has dropped significantly, and his 5:4 TD to INT ratio in the last 3 games is a disturbing trend. However heading into a match-up against the Saints, who are 22nd in the league in pass defense, the Giants could have success downfield with their two best receivers Victory Cruz (46 catches, 800 yards, 5 TDs) and Hakeem Nicks (43 catches, 685 yards, 4 TDs), especially if New Orleans tries to bring the pass rush often and leaves man-to-man match-ups downfield. You can’t forget TE Jake Ballard (27 catches, 443 yards, 3 TDs) either against a Saints team that ranks 27th against opposing tight ends this season, as he could see a lot of targets especially if third option WR Mario Manningham (knee) doesn’t suit for tonight’s game. No matter what success the Giants have against the New Orleans pass defense, you can certainly expect an unbalanced offense for New York tonight leaning on the passing game, which could help to create an exciting shoot-out atmosphere at the Superdome tonight.

Betting Lines for the New Orleans Saints vs. New York Giants at TopBet.com

At home tonight in front of the always-entertaining New Orleans crowd of characters, the Saints get the favorite nod at -340 odds at the TopBet.com sportsbook, banking on a more balanced New Orleans team to overcome the passing-centered Giants offensive attack. New York comes in as a +280 underdog on the money line, which in a do-or-die situation for the Giants may be fruitful for those who are willing to take on a bit of risk and bank on the boys in blue to avoid a 3rd straight loss with a clutch road win. We’ve seen how New Orleans can run away with games on home turf, but it will be a challenge to predict whether the Saints can stay above the spread (-7.5 points, -110 odds) with the closing prowess of the Giants and Eli Manning (+7.5 points, -110 odds). Lastly, looking to the over/under might reveal the best possible wager on the day, with 51 points levied as the mark to surpass or stay within. The Saints have alternated beating the over/under in 4 home wins this year (the last game against Tampa Bay staying under), and with two big passing attacks on the field and clutch quarterbacks able to score points effortlessly down the 4th quarter stretch, the trend looks ready to continue with a busted total points margin tonight.

In a game that both teams must win, this is going to be a great contest for online sports betting, and an exciting game to watch regardless of whether you support either of the two teams in play. The New Orleans Saints hold the match-up advantage with a better run game and the better overall quarterback, however with desperation on the Giants side and solid offensive leader capable of overcoming adversity late in games, if this match-up stays close into the 4th quarter it could be anyone’s ball game. That said, we have to draw the line in the sand somewhere, and side with the Saints to win at home tonight. Drew Brees will simply prove to be too much for the Giants defense, despite their best efforts to pressure him into bad throwing situations, and continue the Saints win streak to 4 over the Giants, with a two touchdown victory on the Monday Night Football stage. Saints prevail to maintain their NFC South lead, 35-21.