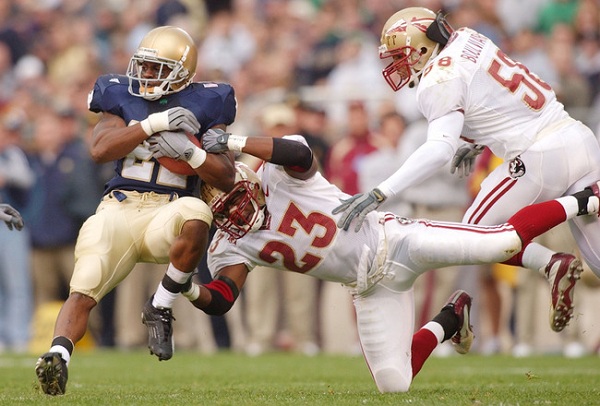 While both the Florida State Seminoles (8-4, 5-3 ACC) and the Notre Dame Fighting Irish (8-4, 5-2 home) may be still a ways off their former elite status of years’ gone by, nonetheless tonight’s match-up between two storied College Football programs should be an exciting one to watch in the Champs Sports Bowl from Orlando Florida, and a great opportunity for betting on sports at one of the top online sportsbooks tried, tested, and reviewed here on our website.

For Florida State, a win in tonight’s contest against a big-time rival would help to solidify a fantastic second half of the season after a rocky start to the 2011 campaign. Since losing three straight to fall to a 2-3 start, FSU has rallied behind their outstanding defense to win their last six of seven games, capping off their season with a win over in-state rivals, the Florida Gators. While not exceptionally impressive on the offensive side of the ball, the Seminoles have staked their claim as one of the best defenses in the country, holding opponents to an impressive 15.1 points per game (4th in the FBS), and allowing a stingy 81.8 yards/game to opposing running backs with just 2.3 yards/carry given up. FSU also hasn’t had more than 19 points stacked against them since October 8th, which will certainly bode well for their chances of success against a Notre Dame team featuring a couple of stand-out players on offense. However, despite the valued efforts of the FSU defense this season, the offense leaves much to be desired even though quarterback EJ Manuel (%65.4 completion rate, 2417 yards, 16 TDs to 8 INTs) has been solid behind center. Mustering just 95 yards of total offense against Florida in a 21-7 win that was all due to an opportunistic defensive presence, Florida State must find a way to move the ball against Notre Dame, a team that is no slouch on defense allowing just over 20 points per contest. Featuring a talented back in Devonta Freeman (107 carries, 531 yards, 8 TDs) and a few solid young wide receivers led by freshman Rashad Greene (33 catches, 497 yards, 6 TDs), Florida State needs find a way to spread the wealth around the offense and avoid being too one-sided on offense for long stretches of the contest. Though FSU is fortunate to have a great defense and great special teams, their young offensive line and sluggish offensive production could leave them vulnerable against a Notre Dame team than has a lot of weapons to call on, and can score in a variety of ways.

Notre Dame comes into this match-up with two tandems of impressive offensive weapons at their disposal. First in the running game, lead back Cierre Wood (199 carries, 1042 yards, 9 TDs) is the first Irish back with over 1,000 yards since 2006, and he has an impressive back-up as well in Jonas Gray (114 carries, 791 yards, 12 TDs), who has hurt defenses with his 6.9 yards/carry average. Though Florida State is a lock down defense against the run, Notre Dame will have to generate something on the ground with these two in order to get ahead of FSU tonight, and to help ease pressure off of quarterback Tommy Rees and/or Andrew Hendrix in the passing game. With the Seminoles very good in the pass rush (averaging 3 sacks per contest), and having an advantage in the turnover margin coming into this match-up, it’s essential for Notre Dame to protect the ball, and limit the mistakes made on offense, and get solid play from their offensive line every down of the game. If the Irish can find a way to relieve some pressure on their QBs, the passing game becomes all the more powerful, with top NFL prospect WR Michael Floyd (95 catches, 1106 yards, 8 TDs) and tight end Tyler Eifert (57 catches, 713 yards, 5 TDs) ready to do damage down field. Eifert has to be a key for the Notre Dame offense as well, as he’s a match-up nightmare at 6’6″ and 250 lbs. With plenty of pressure coming from FSU, getting a few dump-offs over the middle to Eifert amidst a surging defensive line and linebacker corps will help to keep the Seminoles in check, and hopefully open up more room to run and more looks at Michael Floyd deep down field as well.

In a game featuring two solid defenses, tonight’s bottom line really comes down to which offense is able to produce in the face of adversity and constant pressure. While FSU clearly owns the advantage on defense, their offensive hang-ups could end up being their downfall, especially with an offensive line that may start 4 freshman, and has been horrible at stopping defensive rushing pressure. For Notre Dame, putting lots of focus on getting to EJ Manuel is critical. If FSU can’t find a passing attack and has to hedge on Devonta Freeman and the running game, they’ll simply be too one-sided and will have to lean on their special teams and defense to pull them through in a low scoring game. For the Irish, they must find a way into the end zone at least a few times against the Seminoles’ elite defense. Getting balls in the hands of their top receivers is crucial, but it will be just as important to make smart plays, stay conservative, and not give the Seminoles turnovers which they can convert into points. 20 points may be all either team can hope for in a low-scoring, defensive-minded match-up, and it could very well come down to whether the Notre Dame offense gives the FSU defense the opportunities to capitalize on mistakes and turn them into points. If Notre Dame wins the turnover battle, they win the ballgame.

Florida State has a clear home advantage playing in Orlando, which may be what gives them a slight edge in tonight’s contest, with -170 odds on the money line pointing to the Seminoles as the favored team to win the Champs Sports Bowl. Notre Dame is a good-looking pick-up at +150 odds on the money line, that is of course if you have faith that the Irish can muster a good offensive outing against one of the top defenses in the nation. Against the spread, FSU gets -3.5 points to make up at -100 odds, while Notre Dame gets a 3.5 point cushion to play with at the same odds. I’m honestly surprised to see 47 points as the over/under, especially considering that FSU has held opposing offenses to under 10 points per contest in the last 5 games, and considering what we saw last night in Texas’ shutdown performance over Cal in a 21-10 win (a game which had an even lower points margin at 44). Following the trend from last night, which saw just 10 points scored in the first half, I once again like the under bet on total points as one of the best looking bets for a tightly-contested, low-scoring affair.

While this is once again a tough match-up to pick an outright winner on, and support for defensive-minded teams got a boost with yesterday’s Holiday Bowl win for Texas, I simply don’t think FSU has enough on offense to contend if Notre Dame turns in a good game with few mistakes. Granted the Irish haven’t been all too good at protecting the ball this season, ranking 117th with -1.08 turnovers per contest, but if they can keep the ball to themselves, I don’t see the Seminoles mustering enough offense to contend with a well-balanced Notre Dame attack, which if it was able to avoid turnovers in Weeks 1 and 2, might be playing in a BCS game this year instead. That might be a tough task to overcome with Notre Dame giving up the ball 26 times this year, but even against FSU’s tight defense, I still like Notre Dame’s chances of overcoming a few mistakes to win the game down the home stretch. Notre Dame takes a tight, exciting match-up for the Champs Sports Bowl over Florida State, with a 24-17 win.