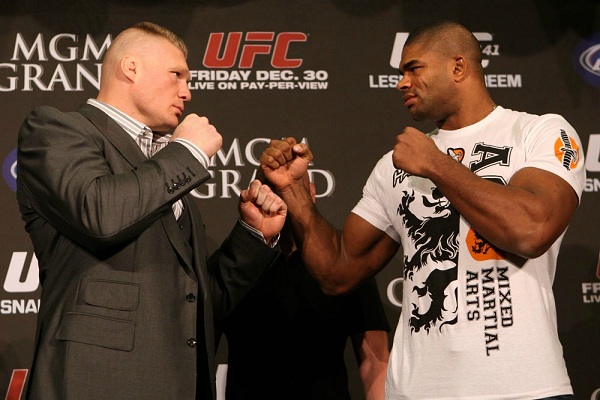 The Ultimate Fighting Championship concludes another great season of bouts with another great heavyweight match-up for Friday night as UFC 141 from Las Vegas, Nevada finds former UFC Heavyweight champ Brock Lesnar (5-2) getting set for a return to the octagon against the awaiting former Strikeforce Heavyweight champion, Alistair Overeem (35-11). With plenty of question marks around each of the fighters heading into a key bout that will give the winner a shot at Heavyweight title-holder Junior Dos Santos, let’s take a look at tonight’s exciting match-up, and spot our best picks for sports betting at one of the best online sportsbooks reviewed here.

Brock Lesnar looked to be well on his way towards being the top fighter in UFC/MMA, before a string of medical issues and the loss of his Heavyweight title belt to Cain Velasquez in October of last year led many to question whether the UFC’s brightest star could return to fighting at the same level as before, if at all. Suffering through mononucleosis as well as two cases of diverticulitis (in short layman’s terms, a nasty condition whereby one’s intestinal walls become split, and the bad stuff goes into the stomach area) Lesnar hasn’t been the same man powerful wrestling force as he was before, and there’s outstanding concern that the massive 6’3″, 265 lb behemoth will continue to be reluctant to take heavyweight-caliber hits in a match-up like the one tonight against a capable striker and kickboxer. While Lesnar’s future remains uncertain past tonight’s fight, the bottom line for this match with Overeem remains that Lesnar, when in form, is one of the most athletic, aggressive, and punishing brute fighters to step into the octagon. Drawing on his wrestling skills first and foremost (which include being an NCAA champion, with a 106-5 record overall during college), Brock Lesnar is not as much of a stand-up type of fighter, but if he can get an opponent down on the canvas, few have the defensive capabilities to prevent a submission hold or TKO from deciding a fight. In a five-round bout (usually reserved for title bouts) that goes into late rounds, Lesnar may find it difficult to contend with a stand-up, striking fighter like Overeem so getting this fight to the ground quickly will be essential for a Lesnar win. However, judging by words from both fighters, nobody expects this to end in a decision; from the horse’s mouth, Lesnar summed up what we can expect tonight but stating, “This is a heavyweight fight that we’re both going in to finish. I don’t foresee it going five rounds.”

For Alistair Overeem, there’s questions about doping, and questions about the quality of competition in his 45 MMA bouts over his career, but there’s little question that with a background in kickboxing, muy thay and jiu-jitsu as well as his massive 6’5″, 265 pound physique, Overeem will be a solid competitor against Lesnar in this heavyweight match-up. Overeem must take heed to avoid getting caught up in a wrestling scrap with Lesnar, who will likely try to come out quick and wrap Overeem up, and would do well to keep the fight upright and try to work on breaking down Lesnar’s lower body. While Lesnar is all steel up top, he comes into this fight looking rather top heavy like a body builder, and Overeem could find an advantage by taking the legs out from under his opponent, slowing him down and making him more susceptible to quick strikes. Mixing his style of attack up against Brock Lesnar is key, considering that Lesnar, while a good wrestler, is still developing his striking abilities after just 7 bouts in UFC competition and his skills around adjusting to fighters with wide-ranging attacking methods isn’t fully polished. Overeem should know that his advantage in this fight lies with staying upright, and working in carefully targeted attacks. There’s plenty of force behind Overeem’s strikes, but it’ll be his ability to stay away from Lesnar getting a body on him and putting him on the mat that may really define the bottom line for this fight; An upright Overeem who lands a few key heavy blows will find success, whereas an Overeem down on the canvas locked up in a wrestling match will quickly turn the favor to Lesnar.

We’re featuring the Intertops Sportsbook for betting lines on tonight’s UFC 141 Main Event, and checking the straight up bets on this bout we find Alistair Overeem as the slight favorite, getting -150 odds to win while Lesnar comes in as a +120 underdog. With -170 odds on the fight to be under 1.5 rounds, bookmakers are also predicting (alongside the fighters) that this match-up will be finished early, with someone gaining a knock-out or submission in the first two rounds. With both fighters knowing they need to put their best foot forward early, look out for a first round KO or submission to be the bottom line for tonight’s fight, with a move to the canvas shifting the advantage to Lesnar, and an upright fight working to favor Overeem’s style. If you’re looking for even more betting props on this match-up, turn also to the Bovada Sportsbook for a few good betting lines, as Bovada also includes props on either fighter completing 1, 2 or 4 rounds, winning by decision or the fight finishing in a draw. Make note that if you’re set on picking Lesnar tonight, Bovada has slightly better odds (+130) for the underdog, which could pay off well on a hefty wagering amount.

As far as an all-around fighter goes, Alistair Overeem is a well-conditioned, well-trained fighter that should be big enough to handle the load that Brock Lesnar brings to the ring. His striking ability kickboxing background and relative lack of injury/health concerns certainly make him a good pick for this bout tonight against Lesnar, who faces many questions about his health, willingness to take big shots, or simply whether he’ll even continue fighting in the UFC after tonight. Nonetheless, this is a big match-up that should bring the best from both fighters, with all the questions being left outside the ring. Lesnar is huge and skilled at overwhelming opponents early; Overeem prefers to chip away with heavy strikes and keep the fight upright. I fully expect Lesnar to avoid tip-toeing around this fight and go straight for the kill from the start, while I expect Overeem to look for a first counter to Lesnar’s advances to give him a shot at a big connecting strike. I also very much like Lesnar being the underdog in this fight, as Overeem seems overly confident of a win from his pre-fight comments, and the lack of hype around Lesnar should have him mentally balanced and poised to overcome his doubters. Let’s not forget that while Lesnar doesn’t have deep experience in these big match-ups, his caliber of competition is much higher that Alistair Overeem’s has been, and at this weight level, Lesnar could easily bully Overeem around, as he’s not as used to carrying so much weight around, or facing such a bull of an opponent. Bottom line, I’m taking Lesnar to silence some critics tonight, and earn himself a shot at Junior Dos Santos ahead as he forces Overeem into submission in the early going of the second round.