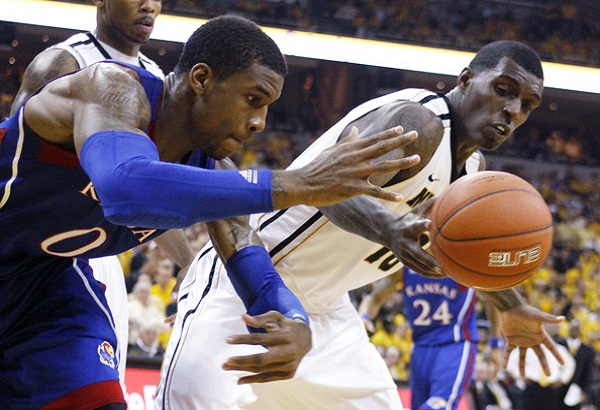 There are big games on the NCAA College Basketball schedule, and then there are big games that define an entire season of college hoops action. For Saturday, one of the longest-standing rivalries in all of college sports gets underway between two of the top teams in the country as the #4 Kansas Jayhawks (23-5, 13-2 Big 12) host the Missouri Tigers (25-3, 12-3 Big 12) at 4:00PM ET at Phog Allen Fieldhouse in Lawrence, Kansas.

After playing each other each year since 1907, this match-up marks the finality of a 105 years of competition between these two basketball programs, as next year’s conference realignment will find the Missouri Tigers headed towards the SEC. There really couldn’t be a better way to send this historic rivalry off, than with a meeting between the two teams at their best combined form in recent memory for the Boarder War. What’s at stake tonight, despite just parting shots in the final conference match-up over a 100+ year span, is the Big 12 conference title, of which Kansas is shooting to win or share an 8th straight, and an NCAA-record 55th title season title overall. Also for the Jayhawks, it’s an opportunity for redemption on home court, after a stinging 74-71 loss suffered at the hands of Missouri last month. In order to do that tonight, they’ll need to focus in on their defensive play, and take some lessons from from their in-state foes Kansas State, who have handed the Tigers 2 of their 3 losses on the season, mainly by holding the Tigers well under their season scoring average of 79.5 points (9th in NCAA Basketball).

Where the Jayhawks have been their best is on the defensive side of the basketball, allowing just 60.4 points/game to opposing offenses, but as was evident in the February 4th loss at Missouri, Kansas will need to do a better job at dictating the pace of the basketball game, and not allowing solid rhythm to develop between the Tigers’ impressive cast of scoring characters. Key figures for the Jayhawks to play better against include Mizzou’s leading scorer Marcus Denmon (17.8 points, 5.1 rebounds/game), who went bonkers on the ‘Hawks putting up 29 points on 6-of-9 shooting from 3-pt range. While Kansas played solid lockdown defense against Ricardo Ratliffe (13.5 ppg, 7.2 rpg) inside the paint, holding him to just 6 points in 20 minutes of foul-troubled play, Kim English (14.0 ppg, 4.1 rpg) and leading bench contributor Michael Dixon (12.9 ppg) both were very successful in adding 18 and 15 points respectively to compliment Marcus Denmon’s efforts. The Tigers shot an outstanding %52.1 from the floor and %45.5 from beyond the arc; if Kansas expects its offense to keep pace tonight, those figures have to drop drastically to keep this game from becoming too fast, and too likely that a last minute effort with clutch shooting determines the outcome of the game. Remember, Missouri is ranked 3rd in the nation hitting almost 50 percent of their shots (%49.8). Their game is built around lots of scoring and scoring efficiency, so job #1 towards a KU win has to be around smothering defense and contested shots at every Tigers’ scoring opportunity.

Fortunately for the Jayhawks, they should be well prepared and blooming with confidence at home in the face of their Tiger foes today. Kansas has ripped off 5 wins in a row since that loss 3 weeks ago, tromping over then-#6 Baylor by 14 points (at Baylor no less), and beating the two teams that have bested Missouri this year, Oklahoma State and Kansas State. Holding their opponents to less than 58 points in the last 3 contests, Bill Self’s team will look to continue using its height advantage in the paint, helmed by the 7-foot Jeff Withey (9.6 ppg, 6.6 rpg) and the 6’10” leading scorer Thomas Robinson (17.4 ppg, 11.9 rpg), to hold down the less physically vertical Tigers, who have shown that they can be beat by good play under the basket. Kansas holds a more than 5 rebounds/game advantage over their rivals today, and using that to their advantage is a must. One very big difference in today’s match-up could be the added presence of Withey, who was completely shut down at Columbus, Mo last time out, scoring 0 points in 23 minutes of work. Since that game though, he’s averaged over 16 points, 10 rebounds and 5.5 blocked shots in 5 games, including two straight games where he was just shy of triple-double territory. With a big contribution from Withey under the rim tonight like he has been putting up over the last three weeks, the 8 point deficit that Missouri was able to shed in the closing minutes of the February 4th match-up seems a lot less likely to occur.

On the Missouri side of the ball, getting to 70 points once again against a tough Jayhawks defense is essential, especially with Kansas’ Tyshawn Taylor, (16.5 ppg, 5.0 assists/game) determined to lead his team into a better all-around performance in today’s match-up. Keep in mind, Kansas is best in conference allowing opposing teams to shoot just 38.1 percent from the field, and with no doubt a better showing coming tonight from the ‘Hawks on defense, the Tigers are going to have to have lots of clutch contributions from their smaller, speedier players. Marcus Denmon once again has to be the leader on the points line, especially in a game where we can expect Kansas’ floor leading Taylor to come up big as well. Denmon, like Taylor, is a defensive assignment difficulty, and for the Tigers they need to get him in the open around the perimeter and let him shoot away as much as possible, or use his speed to penetrate into the lanes against the bigger but slower Kansas big men. Alongside him, Kim English has to have another solid shooting day around the outside. While Missouri once again won’t likely be able to win the battle underneath the basket grabbing rebounds and getting putbacks, they have an advantage working from the perimeter in towards the hoop, and getting good ball rotation to English and Denmon could once again see Missouri hanging close enough to strike late against Kansas at home. Lastly, Ricardo Ratliffe has to avoid foul trouble and help to take some of the defensive weight off English, Denmon and Michael Dixon. While Ratliffe is an incredible shooter, Kansas certainly knows that too, and the added pressure on him with put even more pressure on Missouri’s other shooters to come up big.

Betting Lines for #4 Kansas vs. #3 Missouri at Betonline Sportsbook

For Kansas at home, they walk in as solid favorites to win on the money line, getting -385 odds to emerge victorious on straight up money. The visiting Missouri Tigers are a +325 underdog on the money, as they walk into one of the toughest houses in all of NCAA Basketball.

Ironically, Kansas is favored to win by exactly the same amount of points that they blew in the 74-71 loss to Missouri three weeks ago. Kansas is a -8 against the spread at -115 odds, while Missouri is a +8 underdog with -105 odds.

On the over/under, this is where things could get tricky. On the one hand, we have two of the highest shooting percentage teams in the nation. On the other, we have a Kansas team hell-bent on retribution, looking for their defense to be the X factor in tonight’s game. With the over/under on total points set at 144 1/2 points, both sides have to essentially play to the same points total as they did in the first game of the season (175). With both sides shooting over 50 percent in that game, you would expect some sort of fall off in tonight’s game, but that might even be outweighed if a fast-paced game plays out tonight.

Kansas, bottom line, shouldn’t have lost in Columbus 3 weeks ago. Walking out of that building after dropping an 8 point lead essentially due to Marcus Denmon’s 9-0 run against Kansas in the closing minutes definitely has the Jayhawks anxious to prove they are the better team in this match-up. And I think they are just that. The dominant inside presence of Thomas Robinson is going to show up once again, and he’ll be a 20 and 10 figure in points and rebounds tonight. Kansas’s Jeff Withey we can also expect to be on his game as well. While the guard play of both teams stands just about equal in my book on both sides of the ball, Kansas’ presence down underneath the hoop will eventually be the difference in this game as they outrebound, get more points in the paint, and get to the line more easily than Missouri does. While I expect Missouri to be well prepared with a good game plan that plays to their speed and ability to penetrate towards the basket, it’s going to be a drop in their shooting percentage around the perimeter and a tougher time getting to the hoop on drives that keeps them from a road win at Phog Allen. Kansas prevails 78-72 over Missouri to hold on to the lead in the Big 12 conference, and part this historic rivalry with a big victory at home.