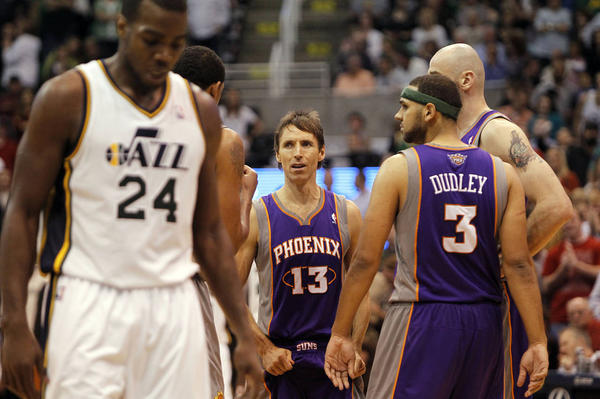 As the NBA regular season draws to a close, just two teams are left to duke it out for the final remaining spot in the 2012 NBA playoffs, and those two teams are set to meet head-to-head tonight as the 8th place Utah Jazz (34-30, 23-8 home) prepare to host the 9th place Phoenix Suns (33-31, 14-18 away) for a showdown starting at 10:30 PM ET from the Energy Solutions Arena in Salt Lake City, Utah. With just one game separating the two teams heading into tonight’s tip-off, and just two games remaining on each team’s schedule, expectations should be running high that this match-up will be one of the best possible options for betting on sports this Tuesday at one of the top online sportsbooks reviewed right here.

For the Utah Jazz, a 4th consecutive victory and their 5th straight at home would assure them the final spot in the Western Conference playoff picture, and there’s no question where Utah has played its best ball this season, winning 23 of their 34 victories on the year at home. Against Phoenix however, who have beaten the Jazz in both meetings this year and were the last team to beat the Jazz at home, all season records go right out the window, as only tonight’s game matters as far as the NBA playoffs are concerned. Also a factor for tonight is a looming 7-game winning streak for the Suns over the Jazz, as the Steve-Nash led Phoenix crew have exploited the Jazz’ questionable defense (allowing 99.3 points/game this season) by getting solid outside shooting and penetration of the lanes courtesy of a well-used pick and roll set-up. While Phoenix hasn’t been much better this year on defense (98.4 points/game allowed), they’ve had the ability to close out in high-scoring games which has alluded Utah, a team packed with a number of youngsters and a number of players unfamiliar with the drive into the playoffs.

A key factor for Phoenix tonight will be whether or not they can get both Channing Frye and Grant Hill back in action tonight, with Hill missing the last 4 games due to a right knee injury, and Frye suffering from a shoulder injury picked up in Saturday’s 118-107 loss at Denver. With both players averaging north of 10 points/game on the season, and each adding a veteran presence to the lineup, having each of them available for tonight’s game will be critical to the Suns bottom line. Perhaps just as importantly though, is whether or not Phoenix can finally step up and play some defense, as while the Suns have proven to be a high-scoring team, they have also proven to suffer at the hands of poor defensive performances, with their 5 losses in 13 games this month showing an average of 108.2 points conceded. In their 8 wins over that span, the Suns have allowed 97.1 points/game, not great by NBA standards, but more than 10 points difference nonetheless. Against Utah tonight, a team that has good size and speed throughout its line-up, being equally big and quick down near the bucket is of paramount importance, meaning that another solid game from center Marcin Gortat (15.7 points, 10 rebounds/game) is essential, as is getting a better night on both offense and defense out of Markieff Morris, Jared Dudley and Grant Hill. There is no question that Phoenix will be able to score on Utah tonight, but the biggest question mark is to whether the Suns can prevent the Jazz from scoring at will and using the fever-pitched home crowd to their advantage. The Jazz, almost more than any other team in the NBA, get a huge boost from playing on their home court, so taking that advantage away from them by working to shut down fast breaks and limit quick scoring opportunities will be of huge benefit for the Suns this evening.

For Utah, Al Jefferson has to be the man who steps up big in the paint for the Jazz tonight. Both he and Paul Millsap will be tasked with staying sharp for the pick and roll offense that Phoenix loves to run, which has burned Utah throughout the past few years. Utah does rebound well, and does match-up well down in the paint against Phoenix, so winning the battle of the boards and getting second chance points on offense will be a big factor for the Jazz tonight. Across the board, Utah has a lot of players that are relatively inexperienced in making a playoff run, but getting step-up play from the likes of Devin Harris and rookie Gordon Hayward, both of whom have stepped up their game considerably as of late, will be a huge boost at home tonight. Both these players have been shooting well from the perimeter down the stretch, with Harris knocking down 44.1 percent of his 3’s in the last 5 games, and Hayward contributing at an impressive 57.9 clip during that same span. With Utah typically not very good from 3-point range, and Phoenix usually pretty clutch from deep against the Jazz, a pair of big deep-ball nights from these two players is crucial. Harris however, must continue to lead the way for Utah, as his 23.7 point average during the Jazz’ 3-game winning streak has been the X-factor night-in and night-out. With another big performance and solid shooting from the supporting cast around the perimeter, Utah should be able to finally shake off a Phoenix team that has simply had their number for the past two seasons.

Betting lines for the Phoenix Suns at Utah Jazz, courtesy of Intertops Sportsbook

The Utah Jazz take the favorite on the money line tonight, getting -200 odds to win straight up at home. Phoenix is the underdog at -170 odds at Intertops, and are 4-3 straight up on the road this month. Utah is 4-1 SU at home this month, though with the lone loss coming at the hands of Phoenix.

Against the spread, the Jazz are favored by 5 points tonight at -110 odds, while the Suns get 5 points to play with for underdog pickers. Phoenix is an even .500 (16-16) ATS on the road, while Utah is a solid 19-12 ATS playing at home this season.

For the over/under on total points, the lofty 204 number reflects a general lack of defense that these two teams engage in whenever they meet. With the first meeting between the two teams generating 231 points of offense, and the second (at Utah) finding the bottom line reaching 212 points, chances of going over are still high even with the large number on the over/under. Though we can expect a similar result, keep tabs on tonight’s starters and scratches, as if Phoenix can have both Grant Hill and Channing Frye in the game, the bottom line will be pushed towards the over wager. If these two veterans sit, or have minutes drastically reduced, Utah has an advantage on both offense and defense, and could hold the Suns to a low enough points total to keep the over/under to the lean side.

In a great showdown with playoff implications, make sure to peruse all the betting lines for tonight’s showdown in Salt Lake City, choose your best wagers, and enjoy a hard-fought battle for the last remaining playoff spot ahead of the NBA playoffs to come.