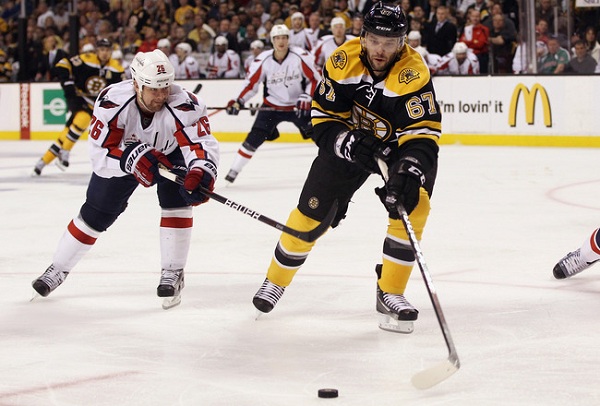 In the final game of what has been a truly fantastic Eastern Conference Quarterfinal playoff series, the Boston Bruins get back to home ice looking to close out against the Washington Capitals tonight, with face-off set for 7:30 PM ET at the TD Garden in Boston, Massachusetts.

There is something to be said for just how close this 7-game series has been so far, as the Capitals and Bruins have played each of the six games so far to within one goal every night, a new NHL record. Add in the fact that there have been 3 overtime games, including one in Game 6 where Boston prevailed 4-3 while on the cusp of elimination in Washington, and Game 7 will undoubtedly once again see everything put on the line for these two well-rounded hockey squads tonight. In a series running high on emotion, but also on disciplined play and teams’ ability to win on the road (both sides have won twice away from home thus far), it will all boil down to which team can keep their composure through 60 minutes (or more perhaps, if needed), and which side can avoid letting the playoff atmosphere in Boston get the better of them. If one thing is for certain, the match-up in goal between Tim Thomas of the Boston Bruins and Braden Holtby of the Washington Capitals is set to be a good one. Each goalie sports a goals against average of within 1/100 of a point (2.17 for Holtby, 2.18 for Thomas), each has a 3-3 record, and their save percentages are %.935 and %.922, with Boston generating more shots but both sides having exactly the same amount of goals scored. There is no doubt that both netminders will be standing on their heads in the final showdown, so we’ll look to other key factors of the game to find (hopefully) a few wagering advantages for online sportsbook betting at one of the top reviewed sportsbooks.

For Boston, generating production on their power play has been a consistent issue come playoff time, and against Washington they haven’t had too much success once again, scoring just twice with the man advantage in 20 attempts. Boston has been taking plenty of shots on net, averaging 36 shots per game over the past 6 contests, but making them more effective by getting the puck at the net and leveraging their big bodies like Zdeno Chara and Milan Lucic has to happen. Getting Patrice Bergeron rested and back into the full swing of things will be a boost, as although he contributed one assist in Game 6, the league’s second-best face-off man has been hampered with an undisclosed injury since the middle of Game 5. Face-offs matter most come this time of year, and Boston has to have Bergeron in top form, especially when the B’s are playing in the Capitals zone. Also important is getting bigger contributions from the Boston stars, as Rich Peverley has carried the team with 3 goals in the last 4 games and has racked up a team-leading 5 points in this series. Tyler Seguin could again be a difference maker as he was in overtime for Game 6 scoring the winning goal, as he’s produced the most shots on goal (24) for Boston, but has just 1 goal and 1 assist to show for it. Boston’s defenders as well take plenty of shots on net, with Chara producing just 1 goal on 18 shots and Andrew Ference also with 1 on 17 shots, so getting a higher level of production from the blue line will have an impact on tonight’s outcome.

Over on the Washington side, we’ve heard rumblings about star player Alex Ovechkin being upset with his lower amounts of ice time in this series (20:12 minutes per game), but that shouldn’t be an issue at Boston this evening, as the Caps will look to press all their firepower forward against the NHL playoff’s stingiest goaltender. Ovechkins will once again lead the team with shots on goal, as any teams’ star player should, but look for goals for Washington to perhaps come from less conventional sources, as the Bruins will seek to shadow Ovechkin, and Alexander Semin this evening. Nicklas Backstrom hasn’t produced a goal in the past 3 games despite contributing 3 assists during that spell, and could be a difference maker with a lot of attention set on the Alex’s. If he can avoid getting into the penalty box (leads both teams by far with 16 penalty minutes in this series), and continue to be a discouraging factor for the Boston defense, Washington will have a solid advantage in the offensive zone against a very good, and very big Boston blue line. Other key players for the Caps include Roman Hamrlik, who is +5 on the series with 3 assists and leads Washington’s defensemen in points, and defenseman Mike Green, who is also +5 and has been stepping up in this series after a quiet regular season. The Caps need everybody look for the best shooting opportunities, and also looking to play stand-up defense once again especially on the power play, and with the pressure of having a home crowd off their shoulders, this could be the time for the Caps to shake their playoff woes and push through a tough competitor into the Eastern Conference Semifinals.

Betting Lines for the Boston Bruins vs. Washington Capitals at the Sportsbetting Sportsbook.

Checking out the top wagering options for this Game 7 showdown, the Boston Bruins take the money line and favorite on straight up bets, getting -180 odds to win at home. With Washington already having won twice at the TD Garden in this series, and having a healthy line-up backed by a solid goalie in Braden Holtby, the underdog pick starts to look solid at +160 going for a Capitals victory.

Against the spread, Boston will need to cover 1.5 goals for sports fans to pick up on the +170 odds, and Washington will get a 1.5 goal cushion at -200 odds. With the series yet to see a game decided by more than just one goal, one can expect once again for the underdog pick to be the best wager here, especially with the success Washington has had on the road in this series. The only caveat may be that come desperation time in the final minutes, an empty net goal could be a consideration to take into account when wagering on the spread. That said, look also to a high probability that in a low-scoring, tight game, this could be decided in overtime, as it has in half of the games played thus far.

Lastly on the over/under for total goals, the mark is set at 5 goals tonight despite the total reaching 7 goals in the last two games. In fact, the total has gone to 7 in 3 of the 6 games of this series, although in the other 3 the total has been held under 3 goals. Expect the latter to be the case tonight, as defense is critical, power play goals will be tough to come by, and both goalies will be set on playing their best games of the season with everything on the line.

Expect a fantastic finale to what has been one of the most exciting Eastern Conference playoff series in recent memory, make sure to check over all your wagering options at the Sportsbetting Sportsbook, or any one of the best reviewed sportsbooks found on our website, and enjoy some outstanding hockey in a great Boston atmosphere tonight!