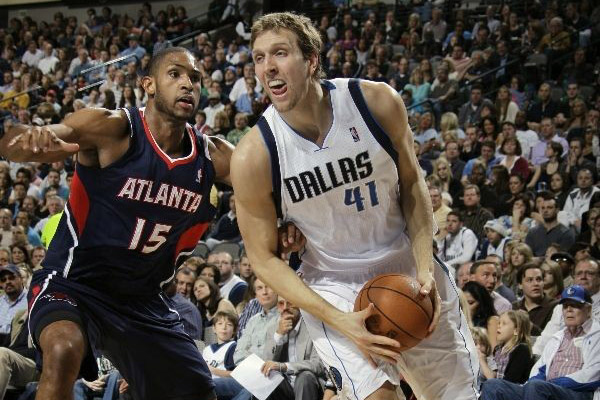 While the Atlanta Hawks have wrapped up their playoff positioning in the Eastern Conference with the 5th seed, there is still the matter of home court advantage on the line, as they sit 1 game ahead of the Boston Celtics despite being the 5th seed to Boston’s 4th (as Boston holds the Atlantic division title). A victory tonight for Atlanta means they’ll be able to sit on home court advantage for the first round of the playoffs, which would be huge against the Boston Celtics, who have not played their best ball away from the TD Garden this season. As such, Atlanta will seek to continue their strong form through the end of the season, winning 7 of their last 10 games coming into tonight’s match-up with the Mavericks, and have won 4 of their last 5 games with the most recent coming on Tuesday against the Los Angeles Clippers. Joe Johnson continues to be a key factor in games down the stretch, averaging 22 points per contest (18.8 points/game this season overall), and comes off a great 28 point effort on 10-for-17 shooting from the floor and 6-for-9 from 3-point range. He’ll need to be on target once again tonight to overcome the Mavs, who have dropped Atlanta in 3 straight meetings, and have owned the Hawks historically by winning 19 of the past 25 games. A big test for Atlanta will come with their inside play tonight, especially with both centers Al Horford (out since January) and Zaza Pachulia out at least through the first round of the playoffs. Therefore a big focus will be getting step-up play from back-up forwards Ivan Johnson and Jason Collins, who will fill in with added minutes tonight, and into the playoffs. Atlanta has been getting good play from its bench in general, indicated by recent wins, and in order for them to overcome a team that has had the better of them in recent years, a well-rounded team effort will be critical.

For Dallas, winning on the road has been a struggle all season long, as the former NBA champions have not had the punch of a deep line-up such as they’ve been accustomed to having in the past. However, Dallas comes in very well rested having not played since Saturday’s loss at Chicago, where both Jason Terry and Jason Kidd sat out. The big question tonight is whether or not Dallas cares if they are the 6th or 7th seed in the Western Conference playoff picture. Both match-ups against the Oklahoma City Thunder and Los Angeles Lakers seem daunting, especially with those two teams owning homecourt advantage, however it would seem to benefit the Mavericks to take on the Lakers, the team they swept out of the playoffs last season, and therefore we should expect a solid performance will head coach Rick Carlisle playing all his starters. For tonight’s game against an understaffed Atlanta squad, Dallas has to keep the points production to a minimum on defense, utilizing their size in the paint as the main advantage. Dallas rebounds very well also (42.8 boards/game, which could be a major factor in tonight’s game, so don’t be surprised to see a lot of big depth get into the action as Brandon Haywood and Ian Mahinmi log more minutes at the center position. Also expect Dirk Nowitzki to continue his hot shooting ways, averaging 26.4 points/game in the last five contests, and being well rested after getting limited minutes in the last two games. A big step-up tonight could come via Shawn Marion, who has just 2 double-digit scoring efforts in the past week and a half on limited minutes. His presence has to be felt tonight if Dallas is to avoid ending the season on a sour note on the road against a hungry, though wounded, Atlanta Hawks side.

The Dallas Mavericks could be a great pick tonight on the money line, considering their status as a +180 underdog while the Atlanta Hawks remaining understaffed in the middle due to injury. However, the bookmakers have turned to Atlanta’s recent form, which has been solid even without some key players, and have brushed aside historical records in this series to favor the Hawks at -220 odds straight up. With this game critical for both teams to win, it will end up coming down to which side can execute on offense and frustrate on defense, with Dallas getting a slight edge in our opinion by virtue of their stronger presence in the paint and more rest under their feet.

Against the spread, Dallas is a +5.5 underdog at TopBet Sportsbook, while Atlanta will have to cover 5.5 points at -110 odds as the favorite at home. Since Atlanta has certainly played well at the Philips Arena this season, and Dallas has struggled at times to find their groove away from home, a great shooting night from the Hawks’ supporting cast could indeed find them pushing past the spread. Both teams sit even at 16-16 on the year ATS coming into this match-up, so this betting line could be the toughest to pinpoint tonight.

For the over/under on tonight’s final showdown of the season, 194 points is the line drawn in the sand. Atlanta is the 5th best scoring defense in the NBA, and Dallas is the 11th best (93.2 vs. 94.7), and the line is an additional 6 points over the season defensive averages for both teams. Atlanta’s game plan will revolve around limiting the Dallas offense from moving quickly in transition, and Dallas will try to own the battle in the paint, to avoid giving Atlanta second chances. With both these scenarios likely to play out, expect a low-scoring game with an added emphasis on good fundamental defense.

It’s a great way to close out the 2012 NBA campaign, so check out all the betting options for tonight’s clash between playoff-bound teams, and put down your best wager on what should be an exciting showdown between the Hawks and Mavericks tonight.