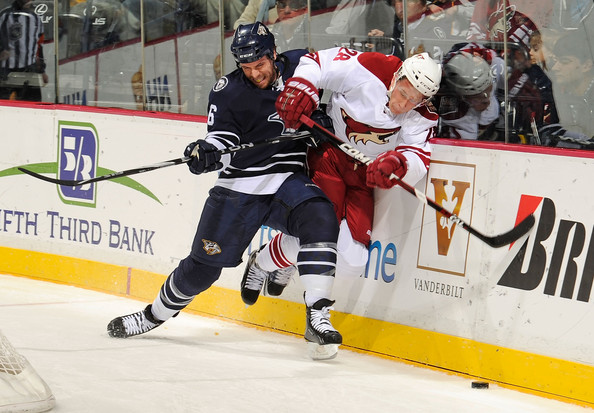 There’s no break in the action for the Stanley Cup Playoffs this week, as the excitement continues on Friday with Game 1 of the Western Conference Semifinals between the Nashville Predators and the Phoenix Coyotes, with face-off set for 9:00 PM ET from the Jobing.com Arena in Glendale, Arizona.

This could in fact be the most well-balanced match-up on paper of this year’s Stanley Cup Playoffs. The Nashville Predators, known for their outstanding defense, top-rated power play and All-Star quality goalie Pekka Rinne, utilized a very deep roster that wears teams down with a fast-paced, hard hitting style of hockey. Phoenix, well, they pretty much like to do the same thing. The Coyotes have found a savior in between the pipes after last season’s departure of Ilya Bryzgalov, establishing Mike Smith as the go-to netminder, behind one of the league’s best defenses and a great penalty kill. There’s few superstars in the offensive game, as just three players had north of 20 goals on the season (Ray Whitney, Radim Vrbata and veteran captain Shane Doan), but regardless of the ‘Yotes low offensive output, they’ve been able to frustrate teams with great play in their own zone, and a host of talented players that have the ability to step up big on any given night. Nashville certainly plays the same type of game on offense, with only Mike Fisher and Patric Hornqvist scoring more than twenty goals and no one having more than 58 points, but the depth of the Preds has really carried the team, and has kept them in the top-10 in team scoring in the NHL.

One very big area to hone in on for this series is the power play. The Nashville Predators own the league’s best percentage with the man advantage (21.6 percent conversion), while Phoenix has really struggled at 5-4 hockey, ranking 29th in the league at only 13.5 percent. Without major improvement in that area, Phoenix is going to have a hard time keeping pace with the Predators, who all but dominated the Detroit Red Wings in the first round of the Stanley Cup Playoffs. It is interesting to note though the Nashville was only able to cash in on the power play twice against Detroit, while Phoenix found 5-4 paydirt with Antoine Vermette 3 times, capitalizing a total of 4 times against Chicago. If Phoenix can prevent Nashville from finding a groove with their own power play, and keep the goals about even with the man advantage, this series becomes just that much more difficult to call as it wears on with more games.

Another very major factor for this series is the fact that Phoenix is simply in uncharted territory. This is the first appearance for the team in the second round since 1987, when they were still the Winnipeg Jets. Nashville on the other hand comes off a great postseason run last year, where they reached the second round for the first time in their team’s short history, falling just shy of a conference finals appearance. Though there’s no question that Phoenix will have plenty of confidence after knocking the Chicago Blackhawks out in six games, there should be expectations that nerves will be a factor for the Coyotes at home in front of a rabid fan base that will be begging for victory. The pressure is most certainly on the home team during the opening games of a playoff series, so watch out for the ‘Yotes to be potentially a little tentative to start the first game.

Though focus will be on some of the shortcomings of each team heading into this series, what is truly worth highlighting is just how good both goalies have been, with Mike Smith holding a .950 save percentage in the first round against Chicago, and Pekka Rinne shutting down the Detroit Red Wings with a .944 save percentage as the Preds took the Wings in just 5 games. Interestingly enough, Mike Smith did not fair well against Nashville in his lone game against them, a 5-4 loss in a shootout back in March. Backup goalie Jason LaBarbera went 2-1 in 3 starts this season against Nashville, so it will be interesting to see how long a leash Phoenix coach Dave Tippett keeps with Mike Smith before turning to LaBarbera. However, this is a much different Mike Smith than anyone saw in the regular season, and any prior records between these two teams (2-2 season series split) can all but be thrown out the window. That said, both teams should have a big priority on giving their goalies more support, as a team simply can’t expect their goalie to come up with near shutout performances night-in and night-out in the playoffs.

For the opening game of the Western Conference Semifinals, as expected the betting lines are as tight as can be for a match-up between the two most well-matched opponents thus far in the playoffs. Both teams pull down -105 odds to win straight up, however we’d have to give Nashville a slight edge as they won’t have the pressure of playing at home in their minds, and will have the advantage of being in this situation just one year prior.

Against the spread, the odds are huge with expectations of a low-scoring, tight game, with Nashville getting -1.5 goals to cover at +285 odds, and the Coyotes set with +1.5 goals to play with at -340 odds. Again, if one team is going to break out against the spread, chances are it’s going to be Nashville, with a more consistent goalie historically, a much better power play, and a lower level of nerves heading into Game 1.

Lastly for the over/under on total goals, 5 is the mark to stay under or push past, and is a reflection of the quality of defenses on ice for this series. As first-game jitters play out and both Pekka Rinne and Mike Smith set out determined to stop everything coming their way, goals are going to be at a premium, hence the -150 odds going under, with +136 odds going over.

Expect a fantastic showdown in an exciting atmosphere for Game 1 of the first Western Conference Semifinal series, and make sure to look over all the available options for online sports betting, as this won’t be a game you’ll want to miss!