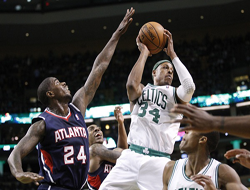 Two of the NBA’s top defensive teams get set to square off in a very well-balanced match-up for the Eastern Conference Playoffs first round action, as the #4 seed Boston Celtics travel to face the #5 seed Atlanta Hawks for Game 1 of a 7-game series. Catch tip-off at 7:00 PM ET, from the Philips Arena in Atlanta, Georgia, in what should make for a fantastic opening NBA playoffs game to watch and to wager on at one of the best online sportsbooks reviewed here.

Atlanta was able to earn home court advantage for this playoff series despite the Boston Celtics winning the Atlantic division by virtue of their better record during the 66-game, lockout shortened season. Closing out the season on high form, with 5 victories in their last 6 games, Atlanta has turned into somewhat of an offensive juggernaut down the stretch behind power forward Josh Smith and shooting guard Joe Johnson, with the team averaging 108.1 points in the final 6 contests on the regular season. While the status of big-man center Al Horford remains in doubt, the Hawks can take comfort in the fact that they won’t necessarily be disadvantaged in the front court, as Boston ranked dead last in the league with just 38.8 rebounds per game. Atlanta hasn’t been great in the paint this year themselves, averaging just 41.8 boards/contest (23rd in the NBA), and a key factor for them is how they react without Horford, and without Zaza Pachulia, who is also likely to miss this opening series with a foot injury. Bench players Ivan Johnson and 7-footer Jason Collins simply have to step up, especially as one of the league’s most veteran inside guys, Kevin Garnett, is well-accustomed to playing playoff basketball, and will be a key factor for the Boston Celtics on the opposing end.

Though depth may be a concern down in the paint for Atlanta, at least their outside shooting presence has them set to be tough contenders against one of the top defenses in the NBA. With Boston’s Ray Allen looking to be 50-50 for the series start (sitting out the last two weeks and taking a cortisone shot to play in this series), Atlanta can seek to have an advantage shooting the ball from the outside, with Joe Johnson on fire coming into the playoffs shooting %57 from 3-point range in the final 5 games of the regular season. Marvin Williams could also play a huge role in this series, perhaps making the starting 5 for tonight’s game if Atlanta chooses to run with a fast, smaller offense from the get-go. Also extremely important for the Hawks on defense is how Jeff Teague is able to limit or contain Rajon Rondo, the NBA’s top assists guy on the season. Rondo torched Atlanta for 20 assists in their April 11th meeting, but has only played 25 minutes of ball in the season’s final 4 games to rest his back (including missing the 97-92 loss to the Hawks, which gave Atlanta home-court advantage in this series). Atlanta will simply have to do a better job limiting Rondo’s ability to find open men near the bucket, mainly Paul Pierce, Kevin Garnett and Brandon Bass, as if they let him run the Boston offense like he’s capable of doing, the Hawks will have a frustrating time trying to be everywhere at once on defense. Jeff Teague, this is your series to shine. Shutdown Rondo and the Hawks will have a big advantage in the series. Leave him to distribute the ball and create open space, and you’re gonna have a bad time.

For Boston on the other hand, the aging Big Three is a huge focal point for Celtics fans, as it’s unclear how effective Ray Allen will be (a crucial part of the Celtics game, especially from 3-point range), and it’s also unclear how Boston’s stamina will hold up after the end of what has been a particularly grueling lockout-shortened NBA regular season. Few would doubt that Kevin Garnett will be the focal point of the Boston attack inside the paint, and he must play well on both sides of the ball for the Celtics to have success. A scrappy opponent that loves to talk-the-talk, Garnett could find himself poised for a big series as Atlanta is without its two top centers, and will have to resort to bench players to defend one of the NBA’s all-time greats. Also in focus is Paul Pierce, who was rested in the final few games of the season due to a toe injury, and is undoubtedly one of the key floor generals for Boston coming into this series. While Rajon Rondo is the distributor, Paul Pierce is the playmaker, and has to come out with a good night on both sides of the ball against Atlanta. He continues to be the top-shooter for the Celtics, hitting 49.7 percent of his shots (a career high), and with Boston struggling this season to produce lots of offense, his contributions have to be felt from the get-go. In what could be the final stand for Boston’s Big Three, as Garnett is set for free-agency, Pierce again will be the go-to guy, and has to lead Boston’s scoring attack in this series. Also a big focal point will be the additions of Avery Bradley, who should step up into Ray Allen’s shoes, and Brandon Bass, who is charged with holding down the middle for Boston alongside Garnett. These two younger players may be huge difference makers, especially if injuries creep up amongst the ranks of the Boston stars. Getting support from both of them will be valuable, especially considering how deep the Atlanta Hawks are despite missing a pair of centers.

The opening game of this series shows only the slightest edge for Atlanta at home, with the city generally being home to transplants and typically having a very strong Celtics support group amongst it. Atlanta walks in as a -120 favorite to win, with Boston just a slight underdog at +100 odds to win.

Against the spread, the betting lines are again tight, with the Hawks a -1.5 point favorite at -110 odds. Boston gets just 1.5 points to play with as underdogs at +110 odds, so if you’re looking to back Boston in Game 1, you’re better off taking the better odds on the money line taking the Celtics to win straight up.

For a battle between two of the league’s Top-5 defenses, the over/under on total points is set low as expected, with 179.5 points the line drawn in the sand. This will be an intriguing betting line, especially considering Atlanta’s torrid offensive form coming into the playoffs, and it will be interesting to see if Boston can properly limit the outside shooting attack that the Hawks have relied on to average nearly 110 points per game during the final two weeks of the regular season. Boston on the other hand has to find ways to generate scoring themselves, ranking near the bottom of the league with just under 92 points per game. In three games this season, under bettors won out twice, with two games producing just 174 and 155 points respectively. As such, expectations should be tempered that Atlanta, despite scoring in droves down the home stretch, will be able to score quick points in transition against Boston, in a game where the Celtics will be fully rested and ready to play defense.

It’s a great match-up for one of the first games in the NBA playoffs this postseason, so make sure to head down to Intertops Sportsbook, one of the best online sportsbooks reviewed here, and plant a wager or two on what should be the first of a very exciting string of games in this 7-game opening series.