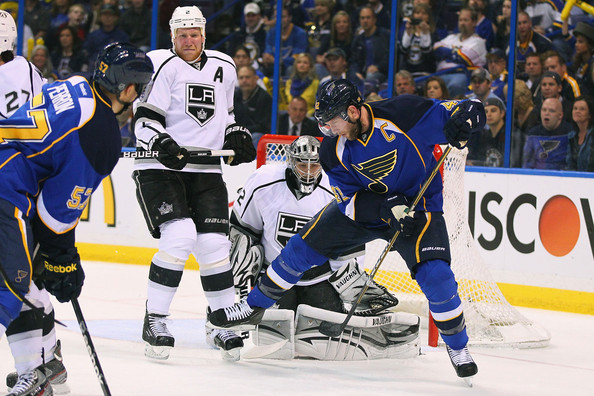 The St. Louis Blues again find themselves at a disadvantage heading into Game 2 of the Western Conference Semifinal series against the Los Angeles Kings, but that may not be any cause for alarm considering the 4 straight games they managed to win after falling 0-1 after the first game against the San Jose Sharks in the first round. However, with tonight’s game back on home ice at the Scottrade Center in St. Louis, Missouri, and the Los Angeles Kings already looking to be a much tougher competitor than the Sharks especially on the road, this match-up will be a crucial turning point in the series between two of the toughest defensive-minded squads currently in the NHL playoffs. With face-off set for 9:00 PM ET tonight, and home-ice advantage out the window for the Blues, if one thing is for sure it’s that anything and everything is still up for grabs in this budding series.

The Los Angeles Kings were fortunate to not be driven out of the first game with a resounding defeat courtesy of the St. Louis Blues, who were dominant in the first period getting the ice-breaking goal from David Backes and having two other potential scorers nullified by outstanding goaltending from LA’s Jonathan Quick. With three minutes remaining before intermission however, the Kings rallied back on an excellent pass by Dustin Penner to Slava Voynov, who buried his shot past Brian Elliot to pull the Kings even at 1-1. Adding a short-handed goal from Matt Greene in the second, and getting an empty-netter in the 3rd, the Kings were able to shock the Blues and steal Game 1 from underneath them, in an arena where St. Louis has been one of the best teams in the league, going 30-6-5 at home this season. Heading into Game 2 then, St. Louis’ focus has to return to goal scoring, in the face of a Kings defense and netminder that will both be determined to take a commanding 2-0 lead out of St. Louis as they head back to the Staples Center, an arena that hasn’t seemed much like home due to the added pressure and lower-scoring efforts that have been a trend for the Kings this year there. Though the Blues can look forward to not having to face such a tough road atmosphere ahead, getting back to even before making the trip West is certainly of paramount importance for Ken Hitchcock’s Blues, and finding a way to overcome the possible loss of key defensemen Alex Pietrangelo, who was boarded in Game 1 by Dwight King, and didn’t suit up for practice yesterday. A key component of both the defense and offensive scoring attack, it’s unclear whether ‘Petro’ will suit up tonight, but you can bet the Blues will have to adjust on the fly to fill the void left over if he’s unable to go.

With Game 1 incredibly balanced between the two teams, with 29 shots apiece, both sides failing on all power play attempts, and both pretty equal in physical play (26 hits for the Blues, 24 for LA), something has to give in Game 2 tonight, and for the Blues it’s essential to find a way to generate production on the power play specifically, where they were 0-for-5 in Game 1. Los Angeles has been good at not getting into a tit-for-tat war against their opponents (something the Vancouver Canucks failed to do, which ended up backfiring on them), so opportunities with the man advantage should once again come infrequently for St. Louis tonight, as LA’s coach Daryl Sutter keeps his team on a tight leash as far as penalties go. St. Louis, while excelling mainly on defense throughout the season, has to turn to its offense and be much more aggressive with the puck, seeing more shots on net from Andy McDonald, Patrik Berglund and David Backes, the three centers who provide the bulk of the Blues scoring attacks. With Alex Pietrangelo possibly out however, St. Louis has to find someone to step up their game from the defensive unit, as amongst the top-5 defensive leaders in ice-time, no player has a goal, and only 4 assists have been generated (with 3 of them coming from Carlo Colaiacovo). Pietrangelo has the same amount of production as the next 5 St. Louis defenders combined, so without him available to help on the power play, and be the main support on defense, the Blues simply need improvement from the likes of Kent Huskins, Barret Jackman and Roman Polak, the 3 St. Louis defensemen with no points during this postseason to date.

One area where the Blues were standouts in Game 1 was at taking the puck away (7 takeways to LA’s 2), which could be applied into Game 2 provided they can find a way to generate takeovers in the Kings zone more often. One thing is for sure to change tonight after a day of rest and practice, is that the Blues overall discipline, which resulted in 20 penalty minutes, must be improved upon. St. Louis had 4 consecutive penalties in the 3rd period alone in Game 1, which continually worked to halt any positive flow the Blues had down the stretch. Amongst those penalties, none were what should be called acceptable playoff behavior, with a high sticking being the least offensive, a 4-minute double minor to T.J. Oshie sending one of their best players out for 4 minutes, and a 10-minute game misconduct to B.J. Crombeen summing up a bad finish for the Blues after the Penner goal sealed the deal. While the Kings haven’t been great with the man advantage, they have used the power play to effectively kill momentum in games away from home, which has resulted in Los Angeles winning 4 straight on the road this postseason. Controlling emotions and playing straight up hockey, the Blues will find themselves in a much better position against a well-disciplined Kings team that doesn’t get involved with chippy play all too often.

For Los Angeles, once again and as per usual, all eyes will be on Jonathan Quick, one of three goalies picked for the finals of the Vezina Trophy selection. Quick has been a savior for the Kings throughout the season, and if questions had remained about his form in the playoffs (4-8 coming into this playoff season), he’s answered them soundly by going 5-1 with a 1.49 goals allowed through 6 games started. Quick is getting more and more help from LA’s sound defense, featuring the hard-shooting Drew Doughty, Willie Mitchell and Rob Scuderi, but for the Kings to really keep the pressure off of Quick, they are going to have to help out with generating more shots on goal against St. Louis’ Brian Elliot, who could be set for a clutch game at any given moment. Captain Dustin Brown, while relatively quiet in Game 1 of this series, has really stepped up his form this postseason, leading the team with 4 goals and 6 points with a +5 rating. Surprisingly, Dustin Penner has been a huge addition for the Kings in the playoffs, after another lackluster season of disappointing production. Saturday’s Game 1 may have been the best game of Penner’s year thus far, and seeing him keep up the pace would definitely bode well for Los Angeles’ chances tonight. Other Kings’ players to watch out for tonight include Jeff Carter, who has yet to log a goal in the postseason despite taking 18 shots, and Anze Kopitar, who has been playing well as an assist man, but who has yet to break out with a scoring streak like he’s capable of doing. Like St. Louis, facing a great defense with a great goalie means getting a lot of pucks on the net. Los Angeles simply must find a way to not only generate more shots, but also more attempts right in close to Brian Elliot, where he has the least time to react quickly to moving pucks.

With St. Louis prepped for mounting a return to the win column on home ice tonight, the bookmakers at Oddsmaker Sportsbook have the Blues set as a -155 favorite to win straight up on the money line, while the Kings come in as tasty +135 underdogs on the road. Los Angeles was able to win 3 straight games against the President’s Trophy-winning Vancouver Canucks, so if the Blues are without Alex Pietrangelo tonight, expectations should be reasonable that the Kings could be a great underdog pick to steal another game away from a supposedly better team.

Against the spread, the Blues must make up -1.5 goals at +195 odds, while the Kings get +1.5 goals to play with at a -235 price. Though the first game of the series resulted in the Kings covering the spread with a late empty-net goal from Dustin Penner, we should expect a much tighter game with fewer mistakes tonight to keep this game very close and within one goal’s difference at the end.

On the over/under for total goals, 5 is the mark set to stay under or push over, and with the way these two teams play defense, and with the caliber of goalies in net, expectations of a higher-scoring game should be tempered. St. Louis knows it can’t make the same mistakes it made in Game 1,which gave the Kings a short-handed goal and the eventual win. With LA knowing the Blues will be in attack mode, expect them to wait quietly for a chance to change the momentum in an instant, which in turn should result in a more cat-and-mouse approach, a possible factor in keeping the points total to a minimum.

Look for a great Game 2 between two very well-matched, defensive hockey clubs tonight. With the Blues needing a win before heading on the road to face Los Angeles for two games on the road, all eyes are on St. Louis to even the score, but once again don’t count out the Kings’ resolve to play as the underdogs, and sneak out with another huge victory on foreign ice.