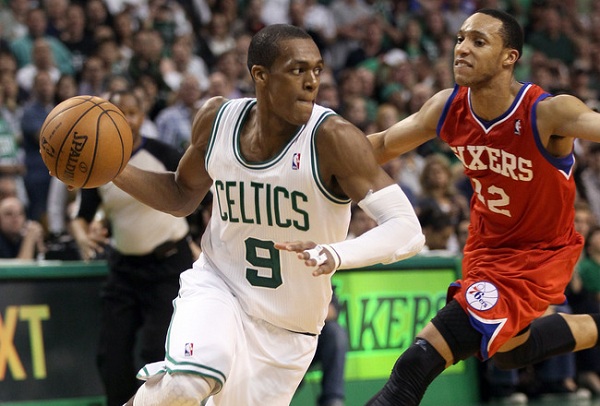 After a dominating road performance on Wednesday night earned the Boston Celtics a 2-1 advantage in their Eastern Conference Semifinal showdown with Atlantic Division rivals the Philadelphia 76ers, the veteran cast of characters from Bean Town get set once again to battle the boys from the City of Brotherly Love tonight in Game 4, with tip-off slated for 8:00 PM ET at the Wells Fargo Center. Without a doubt tonight’s game is a crucial turning point in the series, with the opportunity for the Celtics to take back home a commanding 3-1 series lead, and the chance for Philadelphia to erase the memory of an embarrassing home defeat to reset the 7-game showdown back to zero with a win on home court tonight.

The veteran cast of Celtics, including Kevin Garnett, Paul Pierce and Ray Allen, seemed to have no problems dealing with the sprightly and wily youth of the Sixers on Wednesday night, dominated them in the paint (50 points to 38), while shooting nearly 52 percent from the floor to easily win 107-91. With two straight dominating defensive quarters, in which Boston limited Philadelphia to just 33 points over the 2nd and 3rd stanza, the Celtics were able to take control of the game’s direction heading into the final period of play, and easily coast to a 16 point win. Getting three players in +20 point scoring territory certainly helped their surprising bottom line against what has typically been one of the best defenses in the NBA. Allowing just 85 points per game before Wednesday night, the 76ers were simply not themselves on defense, giving up more than 20 points above their average in the postseason to what has been one of the lowest scoring offenses in the league this year. What Boston was able to do in Game 3, was make sure their top players, getting a little long in the tooth, were able to see plenty of rest, with only Rajon Rondo accumulating north of 40 minutes on the court. All 8 bench players were included in the action (though much of that time was due to the late lead for Boston), and that will be something the Celtics will look once again to do to stay fresh against a very young and athletic Philadelphia squad.

For an old team like the Celtics though, there certainly has to be a lot of optimism generated from the team holding the likes of Evan Turner, Spencer Hawes and Elton Brand to a combined 11 points in Game 3, on 4-of-24 shooting. In fact, the entire 76ers starting offense managed just 36 points, only 11 more than Kevin Garnett accumulated on an impressive 12-for-17 shooting night. Boston will once again look to stay strong in the paint against the Sixers, something that has not been their usual strong point for most of the season, but has found that the veteran leadership and hot hand of KG will once again be a key factor in working towards a commanding 3-1 lead in this series before shifting back to the TD Garden in Boston. Though getting plenty of points out of Kevin Garnett and Brandon Bass will be more than welcome for the Celtics, its equally as important, especially with the Sixers knowing they have to come out with a better shooting night and more aggressive play, for them to continue the solid defense exhibited against Philadelphia’s top inside scorers. Look for Boston to pay added attention to Thaddeus Young, one of the only bright spots for the Sixers in Game 3 with 22 points on 10-of-16 shooting, but to continue to suppress and fluster the young ranks of Philadelphia’s biggest players, who were unable to keep composed on either side of the ball in Game 3.

For Philadelphia, establishing their offensive rhythm will be very important to keep the pace of the game in their control, but perhaps most importantly for the Sixers tonight will be finding a way to limit the effectiveness of a surging Kevin Garnett, who’s 23.6 points and 12 rebounds per game in this series thus far has been the confidence factor the Celtics have needed to put them up 2-1 heading into Game 4. Aside from his offensive prowess, Garnett is the one mainly responsible for keeping the Sixers frustrated in the paint, holding Elton Brand and Spencer Hawes to just seven points in total. His physical, scrappy play certainly doesn’t reflect the fact that he’ll turn 36 years old on Saturday, and if Philadelphia wants to even this series up, they’ll have to find a way to avoid getting tied up too much with him in the paint, and prevent him from getting open looks at mid-range jump shots on offense, an area in which he has schooled the younger Philadelphia defenders all series long. Taking Garnett out of his game, be it by aggressive defending or by being more physical on offense and applying brute force at him, is the only way that the Sixers are going to get their confidence back inside the paint. Currently, the big box is KG’s house, and without a serious effort from Elton Brand and Spencer Hawes to reclaim that territory, the Celtics will once again have the upper hand this evening.

Betting Lines for the Boston Celtics vs. Philadelphia 76ers at Bookmaker Sportsbook.

Heading into tonight’s critical Game 4, the Celtics are a slight underdog against the Sixers, getting +115 odds to win straight up while the hosting Philadelphia side gets -135 odds. While the bookmakers seem to be pointing to an expected improved night for the Sixers at home, the bettors so far haven’t bitten on Philly, overwhelmingly taking Boston as the underdog straight up with 80 percent of the bets going their way.

Against the spread, Boston has a slight + 2 point cushion to play with, as Philadelphia gets the favorite with -2 points to cover at home. Once again the bets are siding with Boston, as nearly 70 percent of bets taken so far have gone to the underdog on the spread. Despite two 1-point ballgames over the first two games being overshadowed by an odd performance from the Sixers in Game 3, tonight’s match-up should have both teams playing much more true to form, with a tight finish expected as Philadelphia is desperate for a win.

For the total points line, the over/under sits at 174 points, or 34 points less than the Game 3 total reached. A return to defense and a slower pace should be expected as Philadelphia tries to reestablish itself as the dominant defensive team it has been this playoff season outside of Game 3, but the question marks left by the offensive explosion on Wednesday has the total points line split 50-50 under and over. Look for a big change coming from Philly in their approach to this critical showdown to limit the points to the underside, and for Boston to be as intent on preventing an offensive breakthrough as well.

It’ll be an exciting game no matter which way the wagers drop tonight between these two Atlantic division rivals, so head on down to the Bookmaker Sportsbook, one of the best online sports betting websites reviewed at CR, and get your picks in for a great night of action in the Eastern Conference Semifinals!