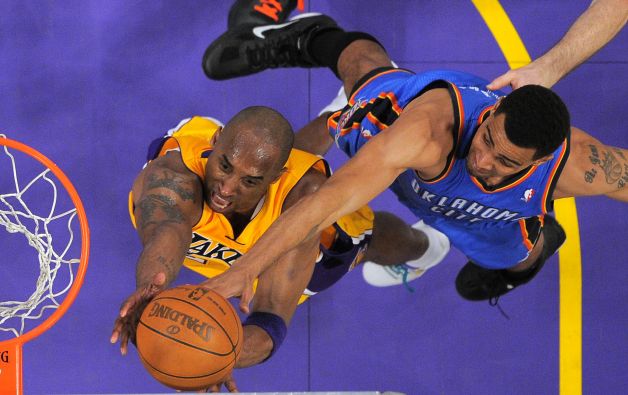 History has certainly been on the Los Angeles Lakers’ side in the playoffs against the Oklahoma City Thunder franchise, with 14 straight home wins dating all the way back to 1980, when the team still sported the green, gold and white of the Seattle Supersonics. While this year’s Thunder team certainly isn’t the same group of years’ past, with the talent of Kevin Durant, Russell Westbrook and James Harden leading the OKC charge, they’ll still have to work hard to shake off a long legacy of failure on the road against the Lakers, in a place where LA has played its best basketball this year. For tonight’s star-studded Game 4 at Staples Center in the heart of downtown Los Angeles, get set for an exciting showdown with tip-off set for 10:30 PM ET, in a must-win game for the Lakers.

Los Angeles was able to step up their play in a critical Game 3 win over the Oklahoma City Thunder on Friday, which not only helped them to preserve their home winning streak over the Thunder franchise, but also kept them from facing a 3-0 series deficit that no NBA playoff team has ever overcome. Tonight’s challenge for Los Angeles however is to be able to get right back into game mode with no rest in between Games 3 and 4 (the first back-to-back playoff games for LA since 1999), against a younger and quicker Thunder team.

The first key to the game for Los Angeles is a continuation of their strong defensive play against a faster OKC squad, which in Game 3 held the Thunder to a playoff-low 39.8 percent shooting from the floor. The inside defensive play of Andrew Bynum, Pau Gasol and the player-formerly-known-as Ron Artest was especially crucial, as their combined efforts helped to limit the Thunder front court rotation of Serge Ibaka, Kendrick Perkins, Nick Collison and Nazr Mohammed to a total of just 16 points. While Kevin Durant, Russell Westbrook and James Harden all accumulated big numbers in Game 3 (31, 21, and 21 points respectively), the Lakers were able to squeeze by with a focus on limiting the OKC peripheral scorers, keeping all other Thunder players under 10 points on the night. That will be a huge task for the Lakers to do again tonight, especially with the wear-and-tear mounting heading into back-to-back playoff games. Nonetheless, without another superb effort to control the area around the basket in Game 4, the Lakers will quickly find themselves struggling to keep up with the Thunder, who no doubt will be looking to get out and run with a smaller, quicker line-up this evening.

Second for the Lakers tonight will be getting better rotation from their bench, which has continued to be an issue all season long. Los Angeles played only 3 players outside their starting core, and while Steve Blake stepped up with a solid 12 points on 4-of-5 shooting (including 2-2 from 3-pt. range), Matt Barnes and Jordan Hill combined for just 2 additional points, to give LA a total of 14 points outside the starting group. Thirdly, and definitely surprising, was the fact that while the Lakers have the bigger bodies and more talented rebounders, they were outscored in the paint 40 to 30 by the Thunder in Game 3. Both Andrew Bynum and Pau Gasol finished Game 3 with double-doubles, but they’ll need to have an increased scoring role tonight and also get contributions from Jordan Hill down low to help balance out the scoring load. Lastly, Kobe Bryant once again needs to be the leader down the home stretch. His 14 points in the third quarter of Game 3, adding to his perfect shooting night at the free-throw line (18-18) helped to rally the Lakers when they needed it the most. Kobe is averaging 33 points/game at home during 5 playoff games there this year, and must be at that mark or better to set the tone for the rest of his team.

For Oklahoma City on the other hand, while there is little they could do about the near perfect 41-for-42 free throw shooting night the Lakers had in Game 3, they can certainly help themselves out by not giving them another 21 opportunities at the charity stripe with the clock stopped. Kobe Bryant alone went to the line 9 times, converting all free-throw opportunities, via penetration into the OKC lanes. Perimeter defense has to improve from all OKC players, especially from James Harden, Thabo Sefolosha and Kevin Durant, who all need to do a better job and limiting Kobe’s ability to drive into the lane and draw fouls off the Thunder front court players.

Second for the Thunder, they have to find a way to get LA’s strong home defensive pressure spread more evenly, by getting more production out of their 4’s and 5’s. Kendrick Perkins will be key tonight on both defense and offense, as he mustered just two rebounds and only 6 points despite 31 minutes of playing time. Serge Ibaka, while pulling down a team-high 11 boards in Game 3, was a -13 for the game, meaning that while he was on the court, the Thunder defense was struggling to get stops and was committing more fouls. Ibaka hasn’t scored in double digits in this series yet as well, and getting him over that hump would be a huge boost for OKC, as more dedicated defensive pressure would come to his side, giving more opportunities for Kendrick Perkins to become open, as well as taking more attention away from Durant, Harden and Westbrook.

Lastly for Oklahoma City tonight, the pace must be kept lively to wear down the older Lakers players, who like to set up and run half-court offense. When the Lakers get into a rhythm at home and can set up plays in the half-court, they are able to manage the game and take time off the clock, while preventing their opponents from pressing the pace. When they are forced to run however, they are subsequently more gassed towards the later stages of the game and thus forced to use their bench players more, which this season has not been their strong suit. Oklahoma should look to run with a smaller, more agile line-up in tonight’s game, capitalizing on their youth and stamina to help them keep the tempo at a heightened pace. Oklahoma City also does well in high scoring games, so with a fast game where they can get higher percentage shots in transition, expect them to be at a big advantage.

The options for wagering on tonight’s crucial Game 4 are extremely tight, with Los Angeles a slight underdog at +100 odds to win straight up, and Oklahoma City getting -120 odds on the money line. Again, history is against OKC with 14 straight playoff road losses against the Lakers, but they should have a good advantage over LA, playing on back-to-back nights with a younger, deeper line-up.

Against the spread, Los Angeles is a measly +1 point underdog, with OKC getting -1 points to cover as the favorite. Both betting lines for the spread feature -110 odds, so with better odds available for straight up wagers, we don’t expect to see too many takers on the spread today.

For the total points line 188.5 points is set for the over/under, which has been eclipsed in 2 of the 3 series games played thus far. With the Lakers needing to set the tone on defense to slow down the Thunder scorers, and also focused on running longer plays on offense to eat up the clock, there should be a strong chance that this game stays to the underside of the total points line tonight.