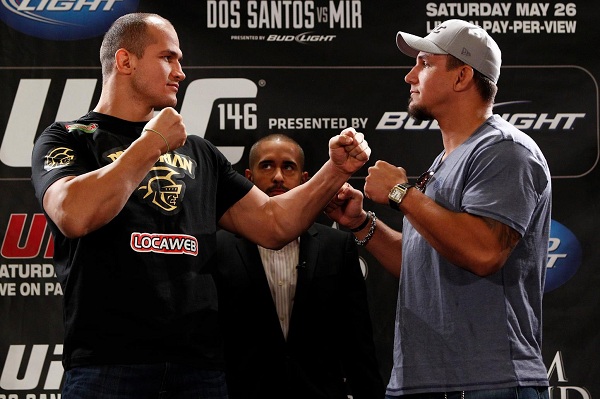 It’s been a while since we’ve seen a UFC fight card as exciting as this come across the betting lines of the top online sportsbooks reviewed here at CR, but with Saturday night’s UFC 146 showdown in Las Vegas, Nevada there’s a mountain of great MMA action for sports betting fans, that will certainly be worth at least a couple wagers today. Let’s take look at the match-ups, and find out the best options for sportsbook betting at Sportsbetting Sportsbook, the best online sports betting site featured today.

The top option for MMA fans looking to wager on UFC 146, the dos Santos vs. Mir fight, is certain to be a fast, furious, and hard-hitting bout between two of the best names currently in the UFC stables. At weigh in, a confident dos Santos (14-1 MMA, 8-0 UFC) was quick to indicate he would be the winner by virtue of knock out in the second round against the more seasoned Mir (16-5 MMA, 14-5 UFC), taking out the former heavyweight champion who came in at a hefty 30 pounds bigger than him. What will be truly interesting though, is whether or not dos Santos can avoid being drawn out of his stand-up fighting element, which he has relied on in his maintaining a perfect record in UFC bouts. There is no question that dos Santos is the better straight-up striking fighter in this match-up, but with Frank Mir an excellent grappler who is arguably one of the best submission artists in the heavyweight division, it will be intriguing to see if Mir is able to shock the MMA world with a surprising takedown, and a quick finish against a better all-around fighter. The bookmakers certainly aren’t expecting that to be the case, with dos Santos a -550 favorite straight up tonight against who many are calling a fighter past his prime in Mir, but if you’re feeling saucy regardless, the +400 odds on Mir may be worth a small bet on a shot in the dark.

Cain Velasquez will no doubt keep an eye on the main event, if only to see how Junior dos Santos, the man who took Velasquez’ own heavyweight title from him, fairs this evening. However, Velasquez will also have his hands full against Antonio Silva, who makes his first appearance in the octagon after becoming the Strike Force grand-prix champion. What’s intriguing about this match-up, which arguably will be the most exciting match-up considering the huge odds stacked in dos Santos’ favor in the main event, is the fact that these two fighters are training partners, and know each other very well prior to entering the octagon together. What we like about Silva is the sheer size and bulk this guy has. 6’4″ inch frame packing 265 pounds. He’s got five inches of reach on Velasquez to go with 4 inches of height, but no doubt he’ll try to get Velasquez to the ground and execute some of his superb jiu-jitsu prowess, as Velasquez has to be considered the better striker of these two fighters. If there is a underdog on your betting ticket tonight, best make it Silva, who at +320 odds to win could make for a great pay day if he can absorb the hits coming from Velasquez, and use his big body to smother the former heavyweight champ into submission.

Roy Nelson vs. Dave Herman: UFC’s Kenny Powers Has Still Got It.

We love a guy with a sick mullet, and Roy Nelson has got the ape drape down to a science. What he doesn’t have down is a winning record in MMA fights lately, going 1-3 in his last four fights. ‘Big Country’ simply has to step up his game against Dave Herman, who despite getting beaten by the elites in the UFC (dos Santos, Mir and Velasquez), has earned a reputation of being able to survive a beating and keep fighting to the final bell. However, what may be even more resilient than Dave Herman, is Roy Nelson’s chin and his massive hands, which both seem to be fashioned out of iron. While Herman may be a better stand-up fighter, Nelson is going to get this fight to the ground one way or another, and should simply out-last Herman in a good brawl. At -200 odds to win, Nelson has the best odds for a fighter who everyone is banking on to pull through with a victory tonight.

Someone is Going to Get Knocked Out: Lavar Johnson vs. Stefan Struve.

This is a very interesting match-up, with a near 7-foot Dutchman in Stefan ‘The Skyscraper’ Struve up against the scrappy Lavar Johnson, who is fresh off two straight wins in the octagon. Struve is coming up fast, at just 24 years of age with already 28 fights under his belt (23-5), and will have a big advantage if he can get Johnson to the mat, as he’s a very talented in the submission game. Johnson, while being a hard-hitting striker that everyone has come to like considering his distaste for fighting to the distance (17-5, no matches reaching the final bell either way), has a big disadvantage in his unfamiliarity with fighting on the canvas. No question Johnson wins if he can come out hard and fast with his hands and get some big shots to the head of Struve, but if he slips up and Struve gets him to the canvas, the big Dutchman is going to secure his 3rd straight victory in the heavyweight division. This is a tough call, even for the bookmakers, with Struve at -135 odds for the favorite and Johnson at +115 odds as underdog, but look out for the submission to be the determining factor in this bout, as Struve avoids going toe-to-toe and takes Johnson to the canvas for a 2nd round finish.

Make sure to check out all the available betting lines for tonight’s heavyweight-infused fight card for UFC 146, and prepare for some great fights from Sin City to cap off a great day of online sports betting at the Sportsbetting sportsbook.