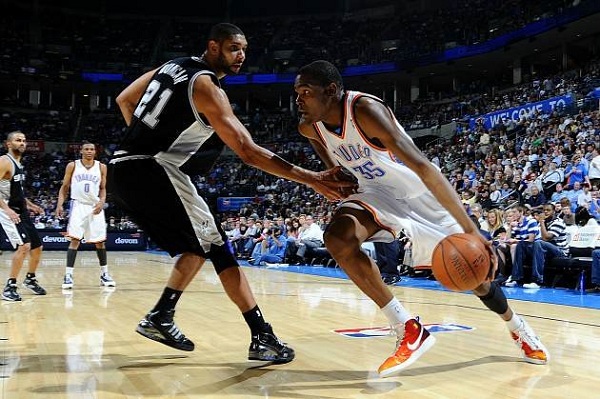 History could be in the making tonight in the Lone Star State, as the San Antonio Spurs try for the longest winning streak extending into the playoffs in NBA history. Up 1-0 in their Western Conference Final series against the Oklahoma City Thunder, win number 20 in a row happens to have special importance for the Spurs chances at reaching another NBA Finals, as victory tonight would put them into a 2-0 advantage before sending the series back to OKC for Games’ three and four. With tip-off tonight slated for 9:00 PM Eastern Time from the AT&T Center in San Antonio, Texas, expect the Spurs to be highly confident and ready to set a date with the record books. On the flipside though, expect the Oklahoma City Thunder to be fully prepared to upset their cross-border rivals’ hopes of becoming NBA legends, and even out the series to take away home court advantage from the Spurs.

Game 1 of this exciting series turned out to be even more interesting than expected, with the Spurs needing a huge 39-point 4th quarter to snag a 101-98 victory from the grasp of the Thunder. San Antonio head coach Greg Popovich showed exactly why he was deserving of the NBA’s Coach of the Year honors, giving a tough-love pep talk that resulted in the Spurs shedding a 9-point deficit to prevail in a close 3-point game. The 4th quarter surge showed that San Antonio has become an offensive powerhouse in the playoffs this season, but it’s still yet to be seen if they can hold off an Oklahoma City Thunder offense, arguably younger and more talented across their three biggest players, who will be determined to come roaring back after giving up a crucial Game 1. One thing that is pretty likely to help San Antonio’s cause, is preventing the inside Thunder scorers from generating much of a splash this evening, as OKC’s three biggest inside players, Kendrick Perkins, Serge Ibaka and Nick Collison were held to just 15 points in total. With another shutdown defense night for the Spurs against these three in the paint, San Antonio will put themselves in a fine position to grab win number 20, and a commanding series lead as they head out of town. The battle for points in the paint no doubt was a huge factor in the Game 1 victory for the Spurs, with San Antonio pulling down 50 points to OKC’s 26, and for tonight’s Game 2 expect San Antonio to once again exploit the Thunder’s soft inside defense, pushing to get lots of penetration into the lanes from the likes of Manu Ginobli (26 points in Game 1), and more effort from guys like Boris Diaw, Kawhi Leonard and Tiago Splitter.

For the Oklahoma City Thunder, Game 1 was theirs for the taking were it not for a complete defensive and collapse in the 4th quarter. While credit has to be given to the Spurs for rallying back at home, all OKC had to do was play consistent defense that they had exhibited all game up until that point, and everyone would be questioning whether or not the Spurs, winners of 19 straight games, were going to be able to maintain the fast pace and aggressive style of offensive play that the Thunder like to engage in. OKC looked to be the better moving the ball upcourt, getting 17 fast break points to San Antonio’s 8, but must do a better job in penetrating the Spurs’ defense around the hoop, and also focus on preventing San Antonio’s veteran outside shooters like Tony Parker and Manu Ginobli from having easy access to the basket. If Manu Ginobli is able to put up anything like his 26 points in Game 1, expect problems once again for the Thunder. However, with a better outside defensive effort from guys like Russell Westbrook, James Harden and Thabo Sefolosha, the Thunder really don’t look in that bad of shape against the Spurs for Game 2. In fact, if the Thunder strictly focus on keeping Manu Ginobli around his playoff average of 11 points per game, it’s a no brainer that an otherwise similar effort from the Thunder like they gave in Game 1 will have them evening out this series on the road, and confident in a return trip back home where they’ve played their best ball on the season. It’s a tough task to try and prevent a late break-out in scoring against a team as confident and as well-coordinated as the Spurs are, but Oklahoma City is a hungry team with plenty of youth and talent, who can easily figure out their weaknesses from game to game and make the necessary adjustments. Look for much better defensive effort through 4 quarters, and the Thunder to stand a great chance at a comeback win, seeing as though tonight’s contest will once again be a close score near the buzzer. Game 1 was the Thunder’s only loss of the playoffs when the scoring line is within 6 points (5-1), so there’s plenty of reason to like the chances of OKC making a strong statement with a comeback win this evening.

The Spurs however once again get the nod as favorites to win at home, where they haven’t dropped a game since April 11th. With -230 odds to win straight up on the money line though, banking on the Spurs to set NBA history with their 20th win extending into the playoffs seems a bit of a risky proposition with not so great odds. The wagers so far agree with that sentiment: 100 percent of the wagers placed so far today at Bookmaker for the money line are siding with the Thunder at +190 odds to win.

Against the spread however, the mix-up is much more balanced, as the Spurs are a -5 point favorite to win at -110 odds, while the visiting OKC Thunder get 5 points to play with, also at -110 odds. Based on the Thunder’s ability to score in droves at any time with the likes of Kevin Durant, Russell Westbrook and James Harden on the floor, we are certainly interested in the Thunder getting 5 points as a cushion, as no doubt regardless of how the finish plays out, we should expect OKC to be either on top, or within striking distance of victory come the final buzzer.

Lastly, the total points line for tonight’s Game 2 finds a lofty 201 point for the over/under. With Oklahoma City’s offense looking to jump out early and lead the way for the Thunder, and with defense on both sides showing a lot of relaxing in favor of more run-and-gun style of play, there is plenty of reason to back the push over the points total for tonight’s Game 2. While we remain slightly reluctant to push over the 200 point line for any playoff game, knowing the offensive firepower of these two clubs, combined with both their abilities to put up huge numbers in any given quarter, the safe bet actually looks to be with the over wager for tonight’s contest. That said, we’ll play it a little saucy and expect a better defensive effort to be on the minds of both clubs, and take a stab at the under wager at Bookmaker Sportsbook.