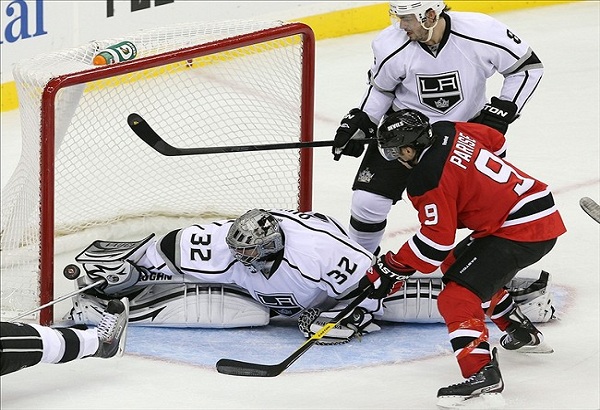 The New Jersey Devils get set to take home ice tonight at the Prudential Center in Newark, New Jersey, for what is certain to be an exciting final showdown for the Stanley Cup Trophy against the Los Angeles Kings. With face-off beginning at 8:00 PM ET between two teams that few expected to make it this far, anything is up for grabs in a series that will feature two very similar styles of hockey play, and two very confident teams that have beaten the best of odds to make it into the final round of NHL action. For online sportsbook betting, get prepared for what should be a wild and intense 7-game series as the best from the West takes on the Beast from the East.

For the Los Angeles Kings, having the first two games on the road may be a blessing in disguise considering they have yet to lose away from home in this year’s playoff run, and have set an NHL record dating back to last year’s playoffs, having accumulated 10 straight road victories. While few could ever imagine that the 8th-seed Kings would become the first team in history to knock off their conference’s #1, #2 and #3 seeded teams en route to going 12-2 in the playoffs to reach the Cup Finals, Kings fans have certainly never been in doubt of what their team was capable of. With the acquisitions of Mike Richards and Jeff Carter this year, LA should have been able to step-up as an offensive powerhouse much earlier on in the regular season, however few would be complaining now with the Kings boasting the top scoring offense through the playoffs that sits just 4 wins away from a goal that has eluded them throughout their franchise history. Helping them to reach that ultimate goal is captain Dustin Brown, the heart and soul of the Kings line-up, who has clearly been a leading candidate for the Conn Smythe trophy, awarded to the most valuable player in the playoffs. Producing 7 goals and 9 assists for 16 points in 14 games, Brown leads on both the offense and defensive side of the puck, with LA taking their cues from him. Sprinkle in some Slovenian playmaking from Anze Kopitar, a resurgent big man in Dustin Penner, and an unlikely hero in Dwight King, a rookie call-up with 5 goals in this year’s playoffs, and you’ve got an LA team that is poised, confident, and ready to do battle with the New Jersey Devils. Oh, and don’t forget that Jonathan Quick guy, who sits behind one of the best defenses in the NHL headed by Drew Doughty, Willie Mitchell and Matt Greene. Quick, a Vezina trophy candidate and another consideration for the Conn Smythe, has numbers which are simply ludicrous in this year’s playoffs; 12-2, 1.54 goals allowed average, 94.6 save percentage. While he’s young and inexperienced at this level, expect the relatively small LA net minder to be rested and ready to make the final push in the final NHL showdown.

Onto the New Jersey Devils, it’s been impressive to watch this team pick apart supposedly more talented units from series to series, and it was the height of their confident play that came out in the final games against the New York Rangers. While the Rangers were a bigger team with arguably more stars and the better goalie, New Jersey’s fast starts to games left the Rangers scratching their heads and resorting to chippy behavior, something that only gave the Devils more of an advantage. Star goal scorer Ilya Kovalchuk is alive and well in the playoffs, generating 18 points on 7 goals and 11 assists. Travis Zajac has come back from a long injury to also produce 7 goals for his team amid an excellent run of form. Finally, Zach Parise has been the rock of the New Jersey line-up, posting 7 goals of his own and helping generate early goals that has taken the wind out of their opponents’ sails. Perhaps the mark of the Devil must be changed from 6-6-6 to 7-7-7. A lucky omen for a team that has hit their lucky streak at just the right time. No doubt though while the Devils offense has been clicking on all cylinders, their defense has been just as good, with Martin Brodeur being the crafty veteran that he is between the pipes, and the Jersey defense operating on a bend-don’t-break philosophy. That philosophy has been easy to execute as the Devils have found their scoring stride early on in hockey games, but they’ll need to be prepared for a Kings team that has had little problem bouncing back from early deficits, and can score seemingly at will with a fleet of fast, big players who will continue to hound anyone with a puck, finish all their checks, and get under the skin of the opposing defense. Nonetheless, expect the Devils to come out fast and put plenty of pucks on net in the early going, to try and deflate the confidence from a Kings team that has been perfect on the road in this year’s playoff run.

The Kings and their impressive road game march into the betting lines as slight favorites for Game 1 this evening, getting -120 odds to win straight up, while the New Jersey Devils are at EVEN money for their first game at home. Though the Kings have been flawless on the road in this year’s playoffs, winning 8 straight games against some of the most difficult teams in the league, New Jersey could get sports bettors a solid opportunity to back the first team to overcome the NHL-record setting Kings on the road, if they can jump out early and take Jonathan Quick and the LA defense off their game. Make no mistake thought, LA head coach Darryl Sutter will have his Kings disciplined and well-rested for Game 1 this evening, with lots of intensity and all the same hard-hitting qualities we’ve seen from LA so far in this playoff run.

Against the spread, the Kings will have to cover -1.5 goals at +255 odds, while the New Jersey Devils get -310 odds banking on them to cover the +1.5 goals as underdogs. This indicates that the bookmakers expect Game 1 to be a very close contest down to the wire, especially with two defenses that are going to seriously step up their form for the first crucial game of the series to end all series.

For the total goals, the familiar 4.5 over/under mark is once again installed for this showdown between two defensive-minded hockey clubs. With Los Angeles allowing just 1.57 goals against per game and New Jersey only 2.33, it’s fair to say that the smart money on the over/under would side to the under wager here. That said, with nerves coming into play, a long period of rest for both teams likely to give offensive players the edge, and with both teams known for starting fast in the playoffs so far this year, we’re very tempted to jump on the over wager in an unexpectedly offensive game. There are simply so many hot shooters on both teams, and with each side averaging over 30 shots on goal per game, even the two top goalies in this year’s playoffs may have a hard time adjusting to the barrage they are going to see from the get-go tonight.

Expect a thrilling Game 1 and an exciting series to play out over the coming weeks for the conclusion of the NHL hockey season. Whether your money backs the Kings or the Devils, hockey fans everywhere can bet on this final showdown to be a pleasantly unexpected surprise, with two teams who have beaten all expectations giving it their all for a chance to put their names on one of the most glorious Cups in all of sports.