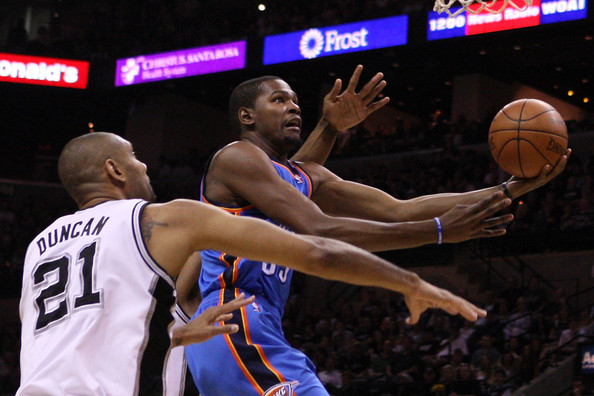 Late-game domination has been the key to the San Antonio Spurs during their impressive playoff run in 2012, and for tonight’s showdown against the Oklahoma City Thunder in Game 3 of the Western Conference Finals, another clutch 4th quarter performance could all but seal the deal on the Spurs return to battle for the NBA Championship. Looking to grab a commanding 3-0 series lead with a road win tonight, San Antonio would have the odds clearly stacked in their favor if they can muster their 21st consecutive victory, as no team has recovered from a 3-0 deficit in a 7-game NBA series previously. Therefore, it’s do-or-die time at home tonight for the Oklahoma City Thunder, who get set to host the Spurs for tip-off at 9:00 PM ET from the Chesapeake Energy Arena in Oklahoma City, Oklahoma.

With the Spurs showing their confidence and poise in both Games 1 and 2 of this series, rallying on a 39-point 4th quarter in Game 1 and shooting north of 60 percent from the field and from 3-point range in the second half of Game 2, the onus for tonight’s game for the Thunder is simply to improve the physical nature of their play on both the offensive and defensive side of the ball. After giving up 120 points to the Spurs in regulation on Tuesday night, Oklahoma City must regroup and get an understanding that they cannot expect to keep pace simply by going tit-for-tat on offense with the Spurs, who are a better shooting veteran team with more weapons at their disposal in this series. Allowing San Antonio to shoot 55 percent from the floor once again tonight is simply not an option for head coach Scott Brook’s team, so the emphasis has to come on shutting down at least a couple of the Spurs top scorers, namely Tony Parker and Manu Ginobli. Ginobli has averaged 23 points a night over two games in this series, and with another 20-plus point effort tonight, he’ll certainly help take the pressure off Tony Parker and Tim Duncan to come up with the big contributions on the road this evening. Parker on the other hand, who scored 34 points in Game 2 on an absurd shooting night (16-21 from the floor), cannot be allowed to shoot at will from just inside the perimeter. He has the hottest hand in the playoffs, and the most confidence coming into tonight’s match-up, so a better perimeter defensive effort from guys like Derek Fisher, Russell Westbrook and James Harden is essential to allow OKC to fight back in this series. They have to be more physical with Parker and Ginobli, keep them off-balance for outside shots, and prevent them from penetrating the lanes as easily as they have been. Keep Parker and Ginobli off their game, and OKC has a chance yet in this series. Let them go free tonight, and the Thunder might as well kiss their playoff run goodbye.

The battle inside the paint is another crucial area for both teams this evening, and for the Spurs they’ll have to be ready for a much more physical and taxing game around the hoop, as the Thunder’s game plan will no doubt center around playing more aggressively inside the key. Again, while OKC was able to win the points in the paint battle for Game 2 (46-42), and the fast break offense was certainly working well (26 points to Spurs 10), the lack of scoring presence and physical play from guys like Kendrick Perkins and Serge Ibaka is preventing the Thunder from keeping pace with the Spurs, especially in the closing moments of the last two games. Here’s a scary breakdown: James Harden, who dropped 30 points coming off the bench in Game 2, outscored all the rest of the Thunder combined, excluding Westbrook and Durant. Those three accounted for 88 out of the team’s 111 points, or 79 percent of total production. The inside players, Ibaka, Perkins, Nick Collison and Nazr Mohammed combined to generate just 11 points in Game 2. Though neither Mohammed nor Collison logged more than 10 minutes, the fact remains that OKC is not getting any production or quality minutes aside from their main stars. Against a San Antonio team that is spreading the wealth of scoring around night after night, the Thunder can’t expect to get a leg up without contributions from some players other than the Big Three, and it’s critical that someone at the four or five position stand up and score in double digits to even out the offensive load.

Though San Antonio rides in to OKC on a 20-game winning streak, and has averaged 104.1 points per game during this year’s playoff run, they find themselves as underdogs on the road tonight at +165 odds straight up on the money line. The Thunder, with everything on the line at home tonight, are -190 favorites to pick up the win and make this series more interesting.

Against the spread, OKC gets -4 points at -110 odds as favorites, while San Antonio pickers will get 4 points to play with betting on the Spurs as underdogs. This seems a tantalizing offer for backing San Antonio, especially considering their ability to close out games late in the 4th quarter. Even if OKC manages to control the game and secure a win, you can bet that the hot-shooting hands of the Spurs are going to keep this game very close near the final buzzer.

For the over/under, the total points line has again increased for a third consecutive time, and for this contest tonight a massive 206 1/2 points is the mark to stay within or bust through. Can the Thunder finally step up and show some defensive presence tonight? Survey says: No they cannot. No doubt the bookmakers are smarting from the 202 points offered on Game 2 (which resulted in 231 points in total and over 70 percent of the wagers going for the over bet), so their upping the line tonight with the hopes of getting more takers to go over in a high-scoring series. Something simply has to change on defense tonight though, especially if the Thunder wish to avoid a 3-game deficit in this series, so expect to see a lot more under pickers in this critical match-up in Oklahoma City.