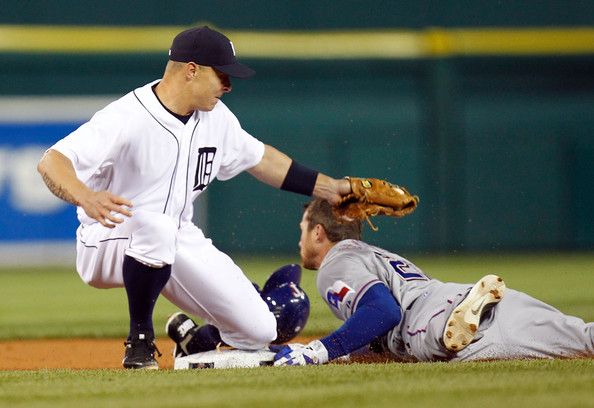 The Texas Rangers (45-28, 22-13 home) hold on to the best record in Major League Baseball heading towards the All-Star break, and it’s undoubtedly come on the backs of their absurdly talented batting order. Ranking first across the board in runs scored, batting average, on-base percentage and slugging, not to mention holding the highest run differential of any team in the majors, there is little doubt that the Rangers have the offensive capability to compete with any team in the league, regardless of who they send to the mound on any given night. However, discounting their pitching rotation and bullpen, which also ranks amongst the top 10 in the league in just about every major category, would be a mistake as well for opposing teams, as Texas holds the 6th best ERA in the league, has the 2nd lowest WHIP average (Walks and Hits per Innings Pitched), and holds opponents’ batters to a .242 average, also 6th best in the league. So what then does a team like the Detroit Tigers (35-37, 18-19 away) have to do to win in a road series match-up against arguably to most complete team in baseball this season? Simply put, they’ll need a lot of luck, and a lot of help from their starting pitching, which has a huge mountain to climb starting tonight at 8:05 PM ET from the Rangers Ballpark at Arlington, Texas.

The starting pitching match-up set for Game 1 of this series is certainly an interesting one, with two 23 year-olds set to duke it out on the mound. Rick Porcello (4-5, 4.95 ERA) is the MLB veteran of the two pitchers, throwing in his 4th season, while Texas’ Justin Grimm (1-0, 4.50 ERA) gets just his second career start filling in for Derek Holland, on the DL with a stomach virus. Interestingly enough for this match-up, the rookie pitcher may have the advantage heading into tonight’s game, considering that Detroit hitters have never faced him previously, and that he’s backed by the hardest hitting batting order in the league. Getting 8 runs of support in his debut, in which he pitched pretty well otherwise allowing 3 runs on 6 hits through 6 innings of work, will no doubt boost the young Grimm’s confidence tonight. Adding to his confidence is the fact that he’s well rested, taking 8 days off in between his first start and the one tonight, in preparation to face one of the best-hitting lineups in the American League. In order to get another solid start however, the rookie will have to find a way to mix in a lot more off-speed pitches especially as the night wears on, and will have to be able to spot his pitches throughout the zone to avoid establishing a any sort of routine. There is no question a steady diet of fastballs will soon find one or two of them ending up in the nosebleed seats tonight with the quality of bats Grimm will be facing, so keep an eye out for how well Grimm can mix up his pitch selection and keep his accuracy going.

For Rick Porcello, no one would be envious of the spot he comes into as the lead man to take on the Texas Rangers in Game 1 of this week’s series. Texas is 8-1 in their last 9 games, having just bounced back from their first defeat after winning 7 in a row. Fortunately for Porcello though, the Rangers haven’t been producing astronomical numbers at the plate recently earning just 4 runs per game in their last 3 victories, which could be hopeful for Detroit staying in tonight’s ballgame. Porcello does have one major disadvantage heading into tonight’s match-up, and that’s the fact that he’s a contact pitcher by nature, who has given up 9 or more hits in his last 3 outings, and doesn’t put away a lot of batters on strikes (just 46 strikeouts in 14 starts). With just one victory in his last 8 outings, Porcello also has a bit of a psychological hurdle to overcome, but fortunately his winning hasn’t be necessary to secure a team victory, with the Tigers prevailing in 3 out of his last 5 starts. One thing he’ll have to try and do better tonight though is to limit the amount of base runners, as Texas has a .372 batting average against him since 2009, with Porcello holding a 6.30 ERA during just two games against the Rangers. He’s allowed 16 hits in 10 innings of work against Texas, and such a ratio of hits per inning will not bode well for him on the road this evening. Keep in mind also that Porcello is 0-3 with a 12.08 ERA vs. the AL West this season.

On the hitting side of things, one player that Detroit needs to have come alive is Prince Fielder, who has been in a slump as of late, and has to be a key factor if the Tigers are to have a better showing than their last series with Texas, April 19-22, in which they dropped 3 of 4 games. Fielder has just 5 hits in his last 27 at-bats, and has homered just 1 time in his last 10 games. If he can get the Tigers on the scoreboard early, confidence will blossom throughout the Detroit batting order. Miguel Cabrera, the other 20+ million dollar man on the Tigers roster, also needs to pick up production, having accumulated just 1 RBI in Detroit’s last 5 games. However, having 6 homers in June, and getting one on Saturday at Pittsburgh, look out for this guy to have a break-out night against a young pitcher. One other Detroit batsmen to look for tonight is Austin Jackson, who is hitting .313 this season, and continues to be a surprise in his third year playing at the major league level. While he’s struggled with strikeouts, he’s been a key hitter on the road for the Tigers, batting .306 away from home, and .331 vs. AL pitching. He’s also hitting .341 against righties this season, which could make him a candidate to be on the base path a few times this evening.

For Texas, we pretty much know the hitting story. Josh Hamilton is unreal once again this year, hitting .319 with 22 homers and a whopping 64 RBI. However, he’s been slumping in June with a .194 average and just 1 home run, and for today he’ll look for his first RBI in 5 games. Fortunately the Texas Rangers don’t rely solely on Hamilton, as Adrian Beltre has picked up the slack, hitting .333 in June, David Murphy is a match-up nightmare for Porcello, already 5 for 7 during his short career against him (also hitting .319 for June), and Michael Young and Mike Napoli are both due to step up their hitting games at some point. With a contact pitcher like Rick Porcello in opposition, the Rangers need to focus on just that; making contact. They’ll be getting pitches to hit most likely all the time Porcello is on the hill, so the priority for Texas will be getting base runners on, and converting them into runs. Texas has been outstanding at producing runs this year, leading the majors with 386 of them thus far, and expect them to be producing once again at home tonight.

The Texas Rangers, despite having a rookie pitcher on the mound, are straight up favorites tonight for Game 1 on the money line at Betonline, getting -138 odds to win. Detroit comes in as a +128 underdog, which shouldn’t be quite tempting enough considering Texas’ power, and Porcello’s recent record.

Against the spread, the Rangers will need to cover 1 ½ runs to earn spread pickers +130 odds. This may be the most tantalizing wager of the evening, considering the power of the Texas bats, combined with Detroit not yet seeing the Rangers’ rookie pitcher, who has looked solid in his debut, and his minor league outings to-date. With Detroit at -150 odds to stay within 1 ½ runs on the road, the Texas side of the spread seems to be again the best option.

With two very powerful lineups however, the best betting lines to chase down may very well be on the over/under, which stands at a lofty 11 runs. Playing it somewhat safe, the Betonline bookmakers give -115 odds to under pickers, with -105 odd for over takers. With Texas not producing huge run totals, and Detroit knowing they need to focus on keeping runners off the base path, we’re siding with the under wager here to hope for a more defense-first ballgame to kick off this series.