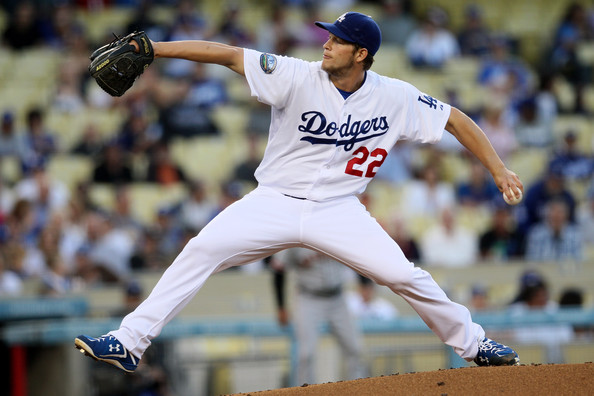 Game 1 of the series between the Los Angeles Dodgers (43-31, 19-19 away) and the San Francisco Giants (41-33, 22-14) may have taken quite a few baseball fans by surprise. Not only did Barry Zito pitch an absolute gem coming off three straight losses, throwing 7 innings of shutout ball while allowing only three hits, but the Dodgers rookie starter Nate Eovaldi, who while being unlucky in the win column still had managed a 2.35 ERA through 5 starts this season, got simply shelled from the onset of last nights game. Allowing all 8 runs of an 8-0 blowout at AT&T Park, both the pitching performance by Eovaldi, and the Dodgers’ inability to jump out offensively against a struggling pitcher start showing some ugly trends for Los Angeles heading into Game 2 tonight; that their usually outstanding starters are starting to wear down under the pressure of having to pitch perfectly every night to stay in contention, while the offense, still sans Matt Kemp, has little to no answer for any offensive threat no matter how anemic or potent it may be. Nonetheless, with great starting pitching, the Dodgers may have their best shot at gathering together a win in the Bay Area, with game time set for 10:05 PM ET from AT&T Park in San Francisco, CA.

Tonight’s match-up on the mound may yet be another very telling example of the amount of pressure being placed on the LA Dodgers’ starting rotation to be perfect, as Clayton Kershaw (5-3, 2.73 ERA) takes on Ryan Vogelsong (6-3, 2.41 ERA). Kershaw, while maintaining a solid ERA throughout the start of the season, had been struggling (by comparison to his usual amazing form) for over a month, allowing 3 or more runs in 4 straight starts, and going 1-2 over his last 6 outings. He’s seemed to being to turn things around however, coming off an outstanding 8 inning, 3 hit performance against Oakland last week, and in his favor tonight he’s traditionally dominated the Giants, posting a 6-0 record with a 0.88 ERA in his last 7 starts against them. Once again, Kershaw will need to be just about flawless as he has been against SF, as the Dodgers still seem to have no answer at the plate to support their pitching staff. LA has lost 6 out of their last 7 games, only once scoring more than 3 runs during that stretch (in an 8-5 loss), and still cannot find someone to step up and fill the arguably deep void left by Matt Kemp’s absence in the batting line-up. Either Kershaw has to be near perfect once again tonight, or the Dodgers have to come up with something miraculous at the plate against Ryan Vogelsong.

It’s safe to say that Ryan Vogelsong has been one of the key Giants’ pitchers to step up in form since the well-documented decline of Tim Lincecum began, and Vogelsong has exceeded all expectations by being one of the most consistent pitchers in the San Francisco rotation. Outside of being spectacular all-around this season, he’s been exceptional on his home mound, posting a 3-0 record with a 1.26 ERA in five starts, all Giants wins, at AT&T park. Coming off his first loss in 8 starts, tonight’s match-up looks to get Vogelsong back into the ‘business as usual’ mode, as he’ll face one of the most diminished batting lineups in the National League tonight. Without Matt Kemp, the Dodgers just don’t have the middle of the order power, hitting just 6 homers as a team since the start of June. No one has stepped up to be the go-to guy in the batting order, and without someone providing some pop tonight, expect Vogelsong to be in line for his 13th quality start in 14 outings, and to build on his 3-1 record with a 2.76 ERA against the Dodger lineup over the last two years.

What is interesting about the Dodgers against Vogelsong, is despite their losing record against him, they’re still hitting the ball very well in opposition, posting a north-of-.300 batting average over Vogelsong’s last 4 starts against LA. In fact, even discounting Matt Kemp from the line-up, the entire Dodgers’ order is hitting near .340 combined lifetime against Vogelsong, something that could be cause for the Dodgers to rally around. Although LA hasn’t done a good job at converting those good hitting stats into hard numbers on the scoreboard, evident by the fact they’ve lost in 3 out of the last 4 games against Vogelsong, nonetheless it could be a start for the Dodgers to get base runners on, and egg on some clutch hitting somewhere in the line-up. That always seems to point to Andre Ethier, who continues to be a massive disappointment with Matt Kemp out of the line-up. Since Kemps’ absence began back on May 31st, Ethier is hitting .217 with just 1 home run and 11 RBIs. There is no question that if the Dodgers want to break out of their funk, without Kemp in the line-up, Ethier has to be the lightning rod for the team. Other key Dodgers that could help out tonight though include Dee Gordon, who is 5-for-11 lifetime vs. Vogelsong, and James Loney, who’s 6-for-12 against him over his career. Juan Rivera has also had plenty of success, going 6-for-14 against the San Francisco starter, but the bottom line of runs has been the real tough nut for the Dodger order to crack. Outside of Matt Kemp, who has 3 career RBIs against Vogelsong, the rest of the Dodger hitters have amassed just 4 runs against him, which they’ll need to at least muster collectively tonight to guarantee a shot at victory.

For the Giants’ batsmen, last night’s 8-run performance was a welcome sign for a team that ranks 21st in the league with 301 runs scored. There has been a lot of inconsistency at the plate for SF this season, especially in producing runs, as there’s little in the way of power hitting outside of Pablo Sandoval. Fortunately, he’ll be the key against the Dodgers this evening, as he’s simply torched LA pitching to the tune of 16-for-27 with 8 RBIs in his last 10 games against the Dodgers. He hasn’t been as successful against Kershaw, posting a .238 lifetime average against him, but he’s hitting .315 on the month, and comes off a 3-for-3 outing last night. Expect him to be a key factor in this game for the Giants. It would also be a great time for Buster Posey to come out of his shell against Kershaw, as despite the fact he’s hitting .195 lifetime against him, he’s hit safely in 9 of his last 10 games, and is batting .295 for the month with 4 home runs and 13 RBI. He’ll be rested after sitting out Monday’s game, so look for him to be a contributor in some form at the plate this evening. Though the Giants themselves are shy on power hitters, right now they’re looking to be hitting a groove, and with the Dodgers just 2 games north of them in the NL West and an opportunity to close that gap to nil by the end of the series, expect the Giants hitters to be hell-bent on stepping up against a very tough pitcher in Kershaw this evening.

The LA Dodgers, despite suffering setbacks at the plate, come into tonight’s match-up as a favorite to win behind Clayton Kershaw, getting -120 odds straight up on the money line. Since Kershaw hasn’t been defeated in his last 7 starts against the Giants, it’s a safe assumption the bookmakers are making to back him as a slight favorite over Ryan Vogelsong. However, that favoring leads to opportunity for Giants’ backers tonight, with Vogelsong getting +110 odds behind him as the starter in tonight’s Game 2. That will make it very tempting to back SF, considering that the Dodgers have had lots of trouble giving support to their starters, and considering how well Vogelsong has performed at home this season.

Against the spread, it’s safe to say that this game should be much, much closer than last night’s blowout affair. The Dodgers get +140 odds to cover 1.5 runs as favorites, while the Giants are again a tempting option at -160 odds to stay within 1.5 runs of LA tonight.

For the over/under, the quality of pitchers again dictates the total runs line, as does the lack of hitting for the visiting Dodgers. Just 6 runs stands as the mark to stay under or push over, with -105 odds going to the over pickers, and -115 odds going for the under, showing that the bookmakers expect runs to be few and far between. Look out for perhaps the lowest scoring MLB game of the day to take place right here, and while it’s extremely low, the under side of total runs is likely the best option across the board for wagering on this game today.