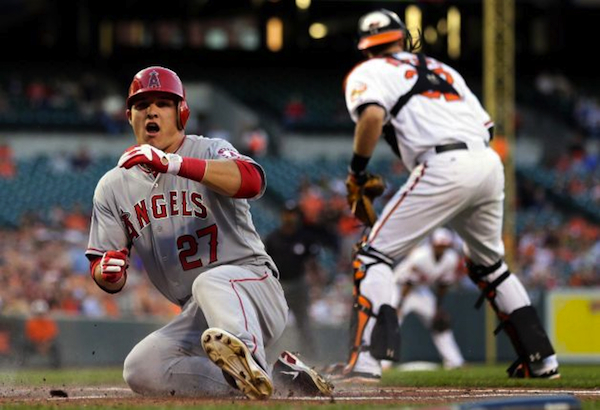 The Los Angeles Angels (41-33, 19-16) continue to stay in their road groove heading into tonight’s Game 2 clash with the Baltimore Orioles (41-32, 21-16 home), winning 12 of their last 13 contests played away from home to give them an impressive 23 wins out of their last 31 games. After slumping through April and into part of May, the Angels now look firmly on track to make a run at the AL West-leading Texas Rangers, and will look to get one game closer if they can finish out a short series sweep against the hosting Baltimore Orioles tonight, with game time set for 7:05 PM ET from the historic Camden Yards ballpark.

There’s no doubt however, that tonight’s challenge will be a big one for the visiting Angels, who will have to take on the best pitcher in the Baltimore rotation this year, Jason Hammel (8-2, 2.61 ERA). Hammel has won 5 out of his last 6 decisions in total, and hasn’t given up a single earned run in two straight outings spanning 17 innings of work. Though walks have been an off-and-on issue for Hammel over his career, and at times this season, his five-hit, shutout effort against Washington this last Friday found him striking out a season-high 10 batters while issuing no walks for the first time this year. Adding to Hammel’s advantage coming into tonight’s game, the Angels have not faced him since back in 2008, and the current Angels lineup has just 27 at-bats in total against this red-hot starter. That could bode very well for Baltimore, who must find a way to keep the Angels’ bats from lighting them up like they did in yesterday’s 7-3 victory for the visitors.

Making this match-up truly interesting tonight will be Jered Weaver (7-1, 2.40 ERA), the star LA pitcher who returned from the DL last week to throw 6 shutout innings against the San Francisco Giants on a limited pitch count (just 78 pitches in total). After suffering through some back injuries, Weaver looked to be back on his usual dominant form, which doesn’t bode well for the chances of the Orioles getting at him tonight. Weaver, despite a few rocky starts due to injury, has been just as dominant as Hammel has for the O’s, winning 6 of his last 7 decisions, and the Angels are 8-2 in his last 10 outings this season. While Baltimore has seen the Angels’ ace quite a few times as of late, with a collective 127 at-bats they are still only hitting .194 against Weaver, and may once again have trouble with him as his nasty off-speed pitches continues to improve for tonight’s ballgame. Interestingly enough though, Weaver hasn’t exactly been dominant over Baltimore, with a 4-3 record and 3.42 ERA against the O’s through 7 career starts. That has to give Baltimore a little confidence heading into the 2nd game of the shortened series with Los Angeles tonight, but they’ll have to avoid allowing Weaver to get into a rhythm this evening, and need to get on the board early to shake his confidence. Interestingly enough, it’s the road where Weaver hasn’t been the best, sporting a 4.21 ERA with a 2-1 record through 6 starts away from home. He’s allowed 17 of his 20 earned runs away from Anaheim, and his walks are triple what they are at home. That speaks to a needed patience on behalf of the Baltimore line-up tonight, especially where again Weaver could be somewhat limited in pitch count.

On the hitting side of the equation for both teams tonight, Los Angeles clearly has an advantage with some of the hottest bats in the league ready in their dugout for this showdown. While no play in the current line-up has more than 4 at-bats against Hammel heading into tonight’s clash, that certainly doesn’t allude to any facts about whether or not the Angels’ batters will be able to find some hits against Baltimore’s ace this evening. Once again the key figure for the Angels tonight is Albert Pujols, who is hitting .309 for the month of June with 4 home runs and 18 RBIs. He’s also walked 11 times, which combined with his 25 hits on the month means he’s been on base more than 1 time per game. Looking for his 5th consecutive game with a hit tonight, expect him to factor into the bottom line somewhere, after going 2-for-5 with a homer in last night’s Game 1. Another player we’re focused on is the crafty veteran Torii Hunter, who always seems to play his best baseball in the month of June. Hitting .299 with 4 homers and 14 RBIs, Hunter has been a tad inconsistent at the plate as of late, but in games when he does get hits, he gets them in multiples, so if he gets one tonight, look out for more production from him. Other key Angels players that will likely factor into tonight’s game include Mark Trumbo, who has 8 homers in the month of June including one last night, and has hit safely in 8 of his last 9 games, and rookie Mike Trout, who has been borderline unstoppable at the plate, currently on an 8-game hitting streak. Hitting .376 for June, expect Trout to be on the base paths again this evening, and be a contributor in the games’ bottom line.

For the Orioles on the other hand, Matt Wieters will certainly be one player to focus on, as he’s had some success against Jered Weaver (2-for-7, 1 home run, 4 RBI), and is having a solid month batting .316 in June. Someone else we’re looking out for is Adam Jones, who is across the board the O’s leader on offense with a .298 batting average, 19 home runs and 40 RBIs. However, his production has tailed off in June, hitting .261 with 3 home runs and just 6 RBIs. He has had hits in 4 straight games, but could give the O’s a boost if he can come up with his first multi-hit game in 7 outings against a very tough pitcher in Weaver. One more player who could have an affect on the outcome tonight is Wilson Betemit, who while struggling against lefties, has been solid against right-handed pitching, and has two straight multi-hit games and a 6-game hitting streak overall. He was one of the lone offensive contributors last night, with a home run and 2 RBI, so expect him to be a factor once again tonight.

Betting Lines for the Los Angeles Angels vs. Baltimore Orioles at Bovada Sportsbook.

The visiting Angels, seeking their 13th road win in 14 tries, have the advantage on the money line tonight getting -135 odds to win straight up behind Jered Weaver. Baltimore will be at a slight underdog status, with +115 odds to win tonight. LA managed to nab 2 of 3 against Baltimore in the lone series played between the two teams this year, and 3 of 4 overall so far, showing they’re clearly the team with the upper hand heading into the final game of this series.

Against the spread, the Angels will hold +120 odds to push past 1 ½ runs against Baltimore, while the O’s will have a 1 ½ run cushion for underdog pickers, though at -150 odds. All three of the Angels’ wins over the O’s this season have been by at least 3 runs, and their lone loss was by just 1 run in extra innings. Therefore, the safe money would be pushing towards the better odds taking LA to cover the points spread tonight.

Wrapping up the betting lines, the total runs find the over/under set at 7 ½, considering the caliber of pitching facing off this evening. With the Angels not having seen Hammel in 4 years, and Weaver looking to be back on top form, we’re expecting runs to come very few and far between, and for the under bet at -110 odds to be the best looking option here at Bovada today.