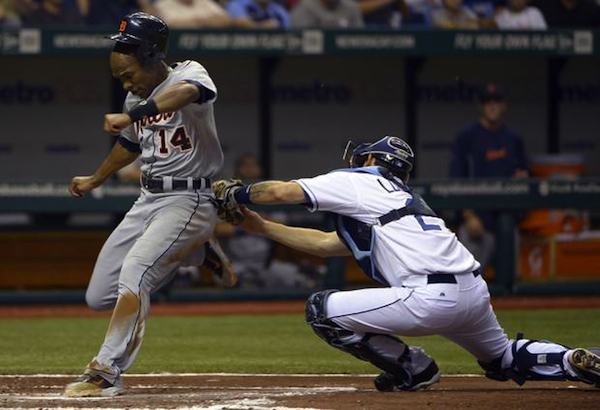 The Detroit Tigers (37-40, 20-22 away) and Tampa Bay Rays (41-36, 22-16 home) now find themselves in the middle of a heated 4-game series heading into Saturday, after last night’s victory for the Rays helped them snap a 4-game losing streak in fine fashion with a victory over Tigers’ ace pitcher Justin Verlander. Hoping for the end of what was an awful run of form, in which the Rays lost 7 out of their last 10 games to fall to fourth in the AL East division, tonight at home Tampa will look for its first back-to-back wins at home in a month, and will once again try to get some sharp pitching to help them get past a hard-hitting Detroit Tigers team. With first pitch due out just after 7:05 PM ET, this National League MLB game of the night will be well worth a look across the betting lines at one of the best online sportsbooks reviewed right here at CR.

Although the Tampa Bay Rays find themselves battling back from a poor run of form, a resurgence of form based upon improving health across the line-up makes their prospects for a good month of July just that much better. Tampa’s starting pitcher Jeremy Hellickson (4-3, 3.45 ERA) is a case in point, making his first start after sitting out the last two weeks due to shoulder inflammation. Also a boost for the Rays tonight will be getting reliever Kyle Farnsworth back into the mix, who hasn’t pitched at all this season due to an elbow strain, but was solid last season with a 5-1 record and a 2.18 ERA with 25 saves. Another reliever, Joel Peralta, is set to come back today as well, though his missing 8 games was due to a suspension levied against him using too much pine tar on his glove. Nonetheless, the inclusion of two talented relievers, plus the return of a healthier Jeremy Hellickson to the lineup, bodes well for the Rays’ confidence and their chances at picking up a victory this evening (Hellickson is 1-2 lifetime vs. Detroit, but with a 1.77 ERA while holding the Tigers to just a .177 batting average). While some of the Rays big hitters, including Evan Longoria and Matt Joyce will still be missing from the batting order, something that has certainly had an effect on the Rays’ inability to win games recently, some good news amongst the pitching staff should provide a positive boost for Tampa Bay at home in Game 3 of their series with Detroit.

For the Tigers meanwhile, they also get some relief in the fact that starting pitcher Rick Porcello (5-5, 4.71 ERA) has been pitching much better as of late, giving up just 1 run in his last outing (and 8-2 win over Texas), and just 3 runs in his last 13 innings of work. Porcello has been reasonably strong against Tampa in 3 career starts as well, going 1-1 with a 3.15 ERA while allowing the Rays batting order to hit just .184 against him (his lowest opponents’ batting average of any team he’s faced in three years). Though not getting a decision in his last meeting against Tampa Bay, coming on April 10th of this season, Porcello showed plenty of confidence allowing just 2 runs on 7 innings of work as part of a 5-2 win for the Tigers. That was with both Matt Joyce and Evan Longoria in the line-up, so it will be interesting to see if Porcello can even improve on his fine outing last time against the Rays, with Tampa still left without their power section of the batting order.

One step-up player who could have an effect in tonight’s game for the Rays is Luke Scott, who despite a dismal .212 batting average leads Tampa in RBIs with 36 on the season. Coming back from the DL, which forced him to miss three weeks, Scott has yet to register a hit in the two games played against Detroit, and is due for some production after going hitless in 6 starts dating back to before his stint on the DL. Another Tampa batsmen to keep an eye out for is Ben Zobrist, who is quietly having a solid month batting .349 with 4 homers and 13 RBIs while accumulating 16 walks and 6 doubles. He’s currently on a 6-game hitting streak, including going 2-for-3 last night with a solo home run, and a continuation of his production at the plate will certainly bode well for Tampa’s prospects of emerging with a win tonight. One more Rays’player to watch for tonight is Desmond Jennings, who launched a pair of solo homers against Justin Verlander last night and went 2-for-4 against Porcello in his only meeting against him earlier this season. Tampa will likely need some pop in this game to get past Porcello, who is a contact pitcher, and if these three guys can step up and generate some offense, Tampa will give Jeremy Hellickson a good cushion to work with in his return start.

For the Tigers tonight, they haven’t had very much success at the plate vs. Hellickson over the past two seasons, but there’s a couple of stand-outs who are having great months that could be ones to watch for this evening. Austin Jackson is the first player that comes to mind, who is also the most productive Tigers’ hitter aginst Hellickson going 3-for-9 with 1 home run and 2 RBIs against him. Jackson is still near the top of the AL in hitting with a .324 average, and is hitting .312 in June and .328 on the road. Looking for a 7-game hitting streak if he can squeeze out some performance at the plate tonight, Jackson should factor into this game somewhere tonight, as he’s seeing the ball very well right now (5-for-9 in the series thus far). One player due for a bounce-back tonight is Miguel Cabrera, who went 4-for-5 on Thursday, but was 0-for-3 last night facing a very good effort by Tampa’s David Price. Hitting .309 with 16 homers and 62 RBIs, Cabrera is always a threat to produce especially with runners on the base paths, so watch out for him to be a key factor in Detroit’s bottom line this evening. Lastly for Detroit, look out for the other heavy-hitter, Prince Fielder, who is due for a step-up after only contributing one hit in the Tigers last 3 games. He hasn’t hit particularly well against Tampa pitching, going 4-for-18 lifetime against them, but chances are good that this near-.300 hitting powerhouse has only a short amount of time before he explodes at the plate once again.

Betting Lines for the Tampa Bay Rays vs. Detroit Tigers at WagerWeb Sportsbook.

At home this evening, the Tampa Bay Rays have a slight advantage on the money line at WagerWeb, getting -121 odds to win straight up behind Jeremy Hellickson. Rick Porcello and the Detroit Tigers are just slight underdogs, with +101 odds taking them to win outright this evening.

Against the spread, the odds get stretched as the bookmakers are showing that this should be another tight, low scoring game centered on quality pitching. However, make note that both games thus far in the 4-game set have found the spread broken one way or another, with the Tigers winning 5-2 in Game 1 and the Rays winning 4-2 last night. For the spread odds, there’s +170 odds on the Rays to cover 1 ½ runs as the favorites, and -200 odds on Detroit to stay within the 1 ½ runs as underdogs. Stay wary of the possibility that Hellickson, despite pitching well against Detroit over his short career, could have a little rust on him after missing a couple weeks, which could give better chances of the Tigers being the right pick against the spread tonight.

For the total runs line at WagerWeb, find 8 ½ runs as the line drawn in the sand for the over/under, with over bettors getting +105 odds, and under pickers getting -125 odds. Neither of the two games in this series went over that mark previously, and with two more good pitchers on the hill tonight, and somewhat subdued hitting for both teams recently, the under wager is a tempting offer.

No matter which way you wager on this game tonight at WagerWeb, count on it being one of the top options for online sports betting on Saturday, and we hope your bets come out victorious, giving you some added cash to play with for upcoming sports betting options later this weekend!