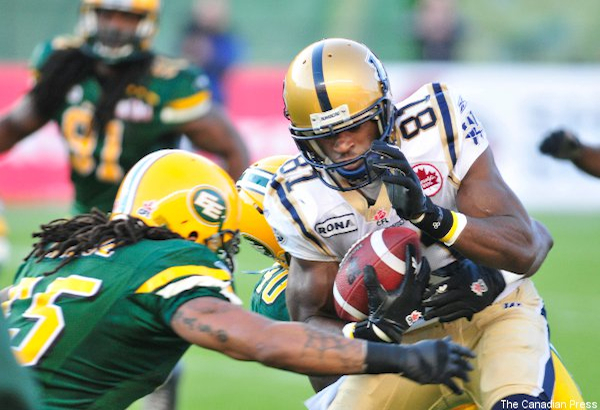 With football season coming up quickly for both the NCAA and NFL, it’s time to take a look at some CFL action in the Great White North, and start getting excited about the prospects for wagering on football once again! With this evening’s clash between the Edmonton Eskimos (1-1, 1-0 home) and the Winnipeg Blue Bombers (0-2, 0-2 away) looking like a favorable match-up for online sports betting, we’ll venture down to one of the best online sportsbooks reviewed at CR to take out a couple of bets on the lone CFL match-up set for Friday night. Kick-off starts at 9:00 PM ET, so let’s break down the best looking wagers for this match-up tonight.

The Edmonton Eskimos come into tonight’s clash looking for some redemption after getting embarrassed in Week 2 by the Saskatchewan Roughriders. A 17-1 loss never helps boost the confidence of a CFL team, however quarterback Steven Jyles is set on turning things around on offense for the Eskimos. There’s no question stats-wise that the departure of Edmonton’s veteran star quarterback has been a major issue, as Ricky Ray was traded to Toronto in the offseason, and since then the Eskimos are ranking dead last in the league in everything from points scored to total offense, to rushing and passing yards. It hasn’t helped that Edmonton lost key receiver Adarius Bowman to a knee injury last week, which heaps added pressure on their star wide-out Fred Stamps, who led the team with 82 receptions for 1,153 yards last year. Also in focus is running back Hugh Charles, who has been under utilized with just 20 touches for 100 yards so far this season. With Jerome Massam, the Eskimos’ previous starting rusher headed for the NFL, there is little question that Edmonton will look to pound the rock with Charles more and more as the season goes on, and they could get a good start at that against a struggling Winnipeg tonight.

With Edmonton sporting just 20 points on the board through two games, they’re no doubt happy with seeing Winnipeg come into their world this evening, as the Blue Bombers have given up a whopping 74 points in their first two games this year. Their offense has been crushed by the passing attack, with Montreal’s star QB jacking them up for 443 yards last week, and the B.C. Lions exposing the Blue Bombers’ D in the 4th quarter the week prior, racking up 17 points to pull away with a 33-16 win. There has been signs up life offensively at least for Winnipeg, with WR Chris Matthews having success with QB Buck Pierce (going for 8 catches and 131 yards with a TD last Friday against Montreal), and Terrence Edwards adding in 6 catches for 126 yards as well, so no doubt Winnipeg will try to exploit the hardened Eskimos defense, which has allowed just 32 points in two games this season. Edmonton certainly has one of the best defenses in the league, but if Buck Pierce can chip away at them through the air and open up the running game a bit (which has been next to non-existent with Bloi-Dei Dorzon leading the team with just 12 rushes for 56 yards), they’ll stand a chance in a low-scoring game tonight.

With two offenses that are struggling to find rhythm in the early goings of the season, it may be advantage Edmonton in tonight’s game at home, with Winnipeg showing signs of not being able to protect against either the pass or the run. We’re looking out for the Eskimos to stick to a plan of around 20 carries for Hugh Charles, who needs to be more involved. Tonight is also a perfect opportunity to get the connection between Jyles and Stamps going, as without a big contribution from their top receiver, Edmonton may once again be spinning their wheels tonight. There’s no question that Edmonton will be able to keep the scoring down against Winnipeg, but if they can’t balance the offense and find success through the air, it’s going to be long, slow-going night on both sides of the ball.

Betting Lines for the Edmonton Eskimos vs. Winnipeg Blue Bombers at TopBet Sportsbook.

At home tonight, the Edmonton Eskimos take the stand as favorites on the money line, getting -125 odds to prevail straight up. Edmonton is 1-0 at home thus far on the year, and will be banking on their tight defense to pull them through tonight. For Winnipeg, which has the unfortunate draw of playing their first 3 games of the season on the road, they’ll be at +105 odds to win. The inability of Winnipeg to close out in tight games combined with their sieve-like secondary could find them very vulnerable to a breakout effort from the Edmonton passing game.

Against the spread, Edmonton doesn’t inspire much confidence in the bookmakers, who have them at just -1.5 points at -110 odds against the spread, while Winnipeg is at the same odds to stay within 1.5 points as underdogs. This may be a great opportunity to bank on the Edmonton defense keeping the Blue Bombers in check, while the Eskimos muster at least a couple scores in a resurgent game at home. Watch out for the spread to be most favorable to Edmonton pickers this evening.

For the final major betting line on tonight’s CFL match-up, the over/under stands at a lofty 45 points, considering the low-scoring offense of Edmonton, and their stingy defense. Unless Edmonton breaks out the offense with renewed fervor, count on this to be a good opportunity to take the under wager, as we’re looking at something in the neighborhood of 21-17 game either way.

If you’re in the mood to add a little football into your life in order to mix it up from the continuing flow of Major League Baseball throughout the summer months, CFL Football is a great opportunity to divert from the norm, and rack up some added cash at one of the top online sportsbooks reviewed right here. Find your best bets at TopBet sportsbook tonight, and come out a winner heading into the weekend!