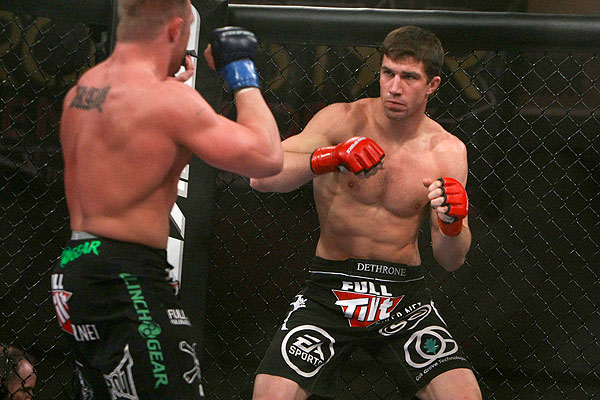 Is it as glamorous as it’s bigger brother, the UFC? No. Are the match-ups as spectacular as say, last week’s Anderson Silva vs. Chael Sonnen bout? Of course they’re not. However, tonight’s main card for Strikeforce, set to take place at the Rose Garden in Portland, Oregon, offers plenty of reasons for UFC/MMA fans to jump into the action, as no less than 4 solid flights are lined up for online sports betting at one of the best online sportsbooks reviewed here at CR. With 9 bouts in total lined up for the six-sided cage this evening, there’s sure to be a number of great potential wagers out there for you to get your hands on. Let’s take a sneak-peak at the best bouts lined up for the night, and the best odds to get a hold of at today’s featured sports betting destination at Bovada sportsbook.

Middleweight champion and titleholder Luke Rockhold gets an interesting draw against former Green Beret Tim Kennedy, in a well-matched bout for the Strikeforce Middleweight belt. Rockhold has defined himself as a get-it-done-early type of fighter, finishing off 6 of his 10 opponents via submission in the first round, and two more by either KO or TKO in the first. He is undefeated in Strikeforce competition, and has a significant reach and height advantage over the challenger Tim Kennedy tonight. Both fighters are excellent grapplers, but Rockhold, with the longer reach and better striking capabilities, should prevail in this bout tonight and defend his title for the second straight time.

There is a vacancy for the Welterweight title, and one of these fighters is going to fill it after tonight. Tyron Woodley is known for his wrestling ability (a former D-1 All-American), and while perhaps not the more glamorous type of fighter (see: boring), he’s got the toolset to give any opponent difficulties with his ability to grapple a wrestle his way to victory via his dominating physical presence, but his lack of striking ability is quite irritating to fighting fans. Marquardt on the other hand poses an interesting challenge tonight, being relatively good at grappling, and has seen all levels of UFC/MMA competition (getting all the way into a Middleweight bout against Anderson Silva, way back in UFC 78). Marquardt is a submission specialist, evident by his 15 submissions during his career, but has a much broader range of tactics to bring to tonight’s fight. It’ll be interesting to see how cautious he is against the strength and takedown ability of Woodley, who may be the more physically fit fighter tonight, but don’t count out Marquardt being able to win this fight via his excellent guillotine, and range of technical ability. The longer this fight goes, the more it leans Marquardt, but either way this is going to be a solid bout to watch and wager on.

Gracie is perhaps the lankiest Middleweight fighter competing today, at 6’4” with a 79-inch reach weighing in at 185 pounds. His 4 victories have all come courtesy of submission, and he’s rated as one of the best sub-grapplers in the division. However, Gracie does lack abilities in the striking department, which should give Jardine an advantage in tonight’s bout. Jardine has lots of experience, having defeated both high-caliber names Forrest Griffin and Chuck Liddell previously, and in a straight-up striking fight he’s clearly a favorite. However, that massive reach and size advantage going to Gracie is hard to overlook, as is his ability to wrestle well on the mat. This should be another great fight to watch, but we’re siding with the more physically gifted Gracie to pull out a victory tonight.

Lorenz Larkin is set for his first bout in the Middleweight category, in a very evenly matched fight with Robbie Lawler. Larkin will be exciting to watch, as he favors a kicking-based approach, and is a solid boxer as well. Lawler on the other hand is pure MMA brawler, but he’s been noted to struggle against kickboxing strategists, just like Larkin. Nonetheless, for fans that like straight-up fighting, this should be an extremely appealing showdown. The difference in these two fighters however, is in how they like to combat their opponents. Larkin likes to keep his distance and use his longer reach and powerful spinning kicks to keep opponents frustrated and at bay. Lawler likes to come in at the body, and deliver the one-stop KO punch to the chin. Quickness undoubtedly will be key for both fighters, as each one can deliver a crushing blow that can stop a fight instantaneously, but we like the wider skill set and faster movement of Larkin to help him come out with a victory via KO.