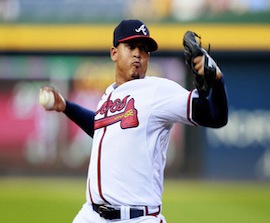 The National League East division is heating up in the second half of the season, and the Atlanta Braves (49-39, 23-22 home) are the team on the move this week, as they prepare for a big 3-game series this week with the visiting NL West-leading San Francisco Giants (49-40, 20-24 away). Seeking their 8th straight win in a row, the longest run of the season, the Braves turn to the surging arm of Jair Jurrjens (3-2, 4.97 ERA), who will face off against the Giants’ Barry Zito (7-6, 4.01 ERA) in an important Game 1. First pitch is set to come just after 7:10 PM ET from Turner Field in Atlanta, Georgia, so get set for a great clash tonight, and a great 3-game showdown between two teams that should make for some exciting options when betting on sports at one of the top reviewed online sportsbooks found at CR.

Tonight’s pitching match-up features two starters that are moving in very different directions at the moment, with Barry Zito having a great start to the season but slipping due to some recent control issues, and Jair Jurrjens finding a return to form after spending some time in the minors back in June. At the beginning of June, Barry Zito’s numbers were highly impressive, considering everyone had written him off as one of the worst deals ever made by the San Francisco Giants organization. Through June 3, Zito was 5-2 with a 2.98 ERA, and well on his way to becoming the comeback pitcher of the year. Since then however, things have gotten rocky for the 12-year veteran, as control has gone out the window, and the ERA has started to mount up significantly. Since June 3rd, Zito has lost 4 out of his 6 starts, has seen his ERA swell by more than a full point to 4.01, and has only once issued less than 3 walks in those last 6 outings. Fortunately for Zito, he’s had success against Atlanta in the past, going 3-0 with a 2.08 ERA in his last 4 starts against them (all at Turner Field), however for betting on this game, many will have hesitation chasing a pitcher that is 2-4 with a 6.12 ERA in his last 6 starts, and ranks 3rd in the majors with 5.27 walks per 9 innings pitched from May forward.

Jair Jurrjens is the complete flip-flop of Zito entering tonight’s game, after suffering through an uncharacteristically bad first half of the season. Just 4 starts into the 2012 campaign, Jair Jurrjens had an 0-2 record with a 9.37 ERA, and was promptly sent down to the minors in order to recover his form. This was quite simply one of the biggest shocks in the MLB pitching world, as last year Jurrjens finished 13-6 with a 2.96 ERA, but fortunately for the Braves it appears that the time away from the majors did the 26 year-old well. Since his return, Jurrjens has been on fire, posting a 3-0 record in his last 4 starts while producing a 2.13 ERA in the process. His control and delivery has been markedly improved, evident by the fact that he’s allowed just 5 walks and 6 earned runs in 4 starts since his return (10 walks, 18 runs in his first four starts). Interestingly enough for this series however, he’s the only Braves pitcher to lose to the San Francisco Giants in the last 9 games between the two clubs, and has posted a 2-3 record with a 3.58 ERA against tonight’s foes. That said, with Atlanta currently on a surging 7-game winning streak, and in a favorable match-up against Barry Zito, retribution may only be about 3 hours away from the first pitch for Jurrjens, who is clearly the more confident, more accurate pitcher in this match-up tonight.

If Barry Zito does have one thing going for him tonight, it is that the Atlanta Braves simply haven’t seen that much of him, at least as far as the current roster goes. Atlanta is a much younger team these days, and has amassed just 68 at-bats against Zito, with just a .206 combined batting average against him. Dan Uggla, who should be back in the starting line-up tonight, is the only player with any success at the plate against Zito, going 6-for-20 (.300) with one home run and 2 RBIs. That’s not to say that there aren’t some hot Braves hitters that could do damage against Zito, especially with the likes of Freddie Freeman on his hottest streak of the season, batting .462 during a 7-game hitting streak. Hitting a 3-run shot last night to help Atlanta sweep the Mets, the 2nd year player has seen his average jump nearly 20 points since the Braves’ winning streak started, and you can be sure he’ll be a factor again tonight, especially if Zito’s control isn’t there. Another Braves hitter to watch for is Chipper Jones, as the wily veteran has been on a tear of his own lately hitting .429 in July, and is now hitting .317 for the season. He’s hit safely in 9 out of his last 10 starts, and should be a factor tonight. Also keep an eye out for Brian McCann, who has a 7-game hitting streak and is pulling out of a first-half hitting slump, as well as Michael Bourn, who is putting on another impressive season hitting .311 and is currently on a 5-game hitting streak of his own. There is no doubt that the Atlanta batting order has plenty of weapons, and with them starting to peak right now, San Francisco will be hoping to steal a game away from the Braves tonight before turning to a pair of their staff aces (Vogelsong and Bumgarner) for games 2 and 3 in this series.

For the Giants, Melky Cabrera has been the talk of San Francisco since the All-Star break, having earned the MVP for the All-Star game by scoring the game’s opening (and decisive run) and by blasting a 2-run homer to seal the deal. Cabrera has been so impressive at the plate, accumulating 122 hits on the season for a .353 average, and is hitting .371 thus far for the month of July. The Giants certainly hope he can keep it going this evening, as their power section is limited and they’ll likely need to produce to support Barry Zito on the mound. Other Giants hitters who may come into effect though are Pablo Sandoval, who has a 4-game hitting streak and is 4-for-9 against Jurrjens, and Ryan Theriot, who is 3-for-6 against Jurrjens and has hit successfully in 5 out of his last 6 games. Buster Posey has also seen a surge lately, going 3-for-4 on Sunday night to help the Giants sweep the Houston Astros, and is rapidly approaching a .300 batting average on the season. He’s hitless against Jair Jurrjens (0-for-3), but could be due to ante up tonight on the road.

Betting Lines for the Atlanta Braves vs. San Francisco Giants at Bookmaker sportsbook.

For tonight’s match-up, the Atlanta Braves own the advantage on the sports betting lines behind Jair Jurrjens, getting -153 odds to win straight up. With Atlanta beating San Francisco in 8 out of the last 9 meetings, and Atlanta on a hot streak wining their last 7 straight, there’s bound to be some money pushed towards the Braves even at higher odds on the money line. That said, if Barry Zito can find some control, the Giants, who’ve won 3 straight of their own, could be an interesting underdog bet at +133 odds at Bookmaker.

Against the spread, the Atlanta Braves will need to cover 1.5 runs to earn spread pickers +145 odds. This should be the most wagered on betting line for this match-up, as Atlanta has been hitting so well during their 7-game winning streak, and Barry Zito could be in for trouble early on in the game if his control isn’t there. For the Giants, there is simply too much risk involved to take them to stay within the 1.5 runs as underdogs, considering the lofty -165 odds it will take to see that through.

Lastly for the total runs tonight, the mark for the over/under stands at 9, with -120 odds for the under wager, and EVEN money for the over. So far, 75 percent of the wagers at Bookmaker are going with the under bet, but it could be worth a little risk to chase the even money to see this game push over. Once again, if Zito gets in trouble against a hot-hitting Braves lineup, the runs could balloon very quickly and push over, regardless of how good Jurrjens is in opposition tonight.