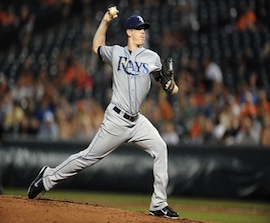 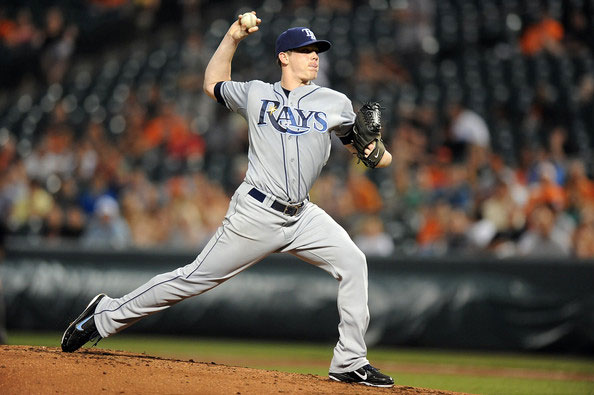 Two teams fully entrenched in the AL Wild Card race this season get set to do battle in an AL East divisional clash tonight, as the Baltimore Orioles (51-45, 23-22 home) prepare to host the visiting Tampa Bay Rays (49-47, 21-22 away) for a three game series at Camden Yards in Baltimore, Maryland. With two outstanding pitchers on the mound set to duke out an important showdown starting at 7:05 PM ET tonight, this is one of Major League Baseball’s key match-ups you won’t want to miss out on for online sports betting at one of the best online sportsbooks reviewed at CR.

Tonight’s pitching match-up is certainly a good one, with Baltimore’s Wei-Yin Chen (8-5, 3.80 ERA) facing Tampa’s Jeremy Hellickson (4-6, 3.55 ERA), but perhaps the most pressure for the game lies on the shoulders of Hellickson and the Rays, who come off a poor home stand and head into the first game of a 9-game road trip. In fact, the Rays have been on a steady downward turn since losing the division lead back on June 11th, and have compiled just a 14-22 since then. They dropped the last 2 games at home against the lowly Seattle Mariners coming into tonight’s contest to finish 4-6 on a 10-game homestand, and badly need a boost in confidence and a quality performance from their starter on the road. Against the Orioles, who just lost for the first time in 6 games, Tampa must find a way to get scoring on the board early in the first game of a long road trip, and fortunately they’ve already had some success against Wei-Yin Chen, who was tagged for 5 runs over 5 2/3 innings in a 5-0 loss to Tampa Bay in his only career start against them back on June 1st. Perhaps just as important for the Rays tonight is to get Jeremy Hellickson back in a groove once again, who is in a 0-6 slump over his last 9 starts, despite 3 straight quality appearances leading into tonight. Luckily for the Rays, Hellickson has been impressive against Baltimore during his short career, posting a 4-2 record with a 2.36 ERA. The Orioles are batting just .210 off of him, and if he can keep the Orioles to a very low scoring output, the Rays may just have a chance in a tight game on the road.

Run support will be huge for both pitchers this evening, with both teams equally unable to produce runs (tied for 19th at 396 runs apiece) this season, and unable to raise their batting averages out of the bottom quarter of the league (26th for the O’s at .241, 28th for the Rays at .232). It’s truly interesting to note though how the Baltimore pitching rotation is carrying the load this season, as Baltimore still manages to hang on to second place in the AL East despite a -46 run differential. They are the only team in the AL East with a negative run differential this season, and their standing at a half game out of the Wild Card spot is truly a testament to how good their pitching has held up, and how savvy of a manager Buck Showalter is at getting the best out of his starting rotation and his bullpen. Facing a team that hasn’t been able to produce runs, Baltimore has to have an upper hand in this match-up tonight, just as they did in the previous series between the two teams in Baltimore, in which the O’s took 2 out of 3 games from the Rays between May 11th-13th.

Looking across key contributors at the plate for this evening’s game, the stand out for the Baltimore Orioles lately is Nick Markakis, who is hitting .362 in July (17-for-47), but has yet to break out with scoring production, having no homers and just 1 RBI so far this month. While he’s hit just .190 for his career against Hellickson (4-for-21), two of those 4 hits have been home runs, and he’s driven in 5 of the Orioles 9 RBIs against the Tampa Bay pitcher. Another key O’s player to keep an eye out for is Adam Jones, who is having a tremendous season already with a .292 average, 22 homers and 50 RBIs. Jones is 6-for-19 (.316) against Jeremy Hellickson, and also sports a pair of home runs against him. Though Baltimore doesn’t have a huge power section, and doesn’t hit for a great average, often times all they need is one big blast, or a couple of clutch hits early on to keep them ahead. This is notable in the fact that during their most recent 5-game winning streak, only once did the team score more than 4 runs in a game, and 4 out of 5 of those games were decided by 2 runs or less.

For Tampa Bay on the other hand, there’s very little experience hitting against Wei-Yin Chen, but that didn’t stop them from clutching up with a victory the last time they met up against him. It’s likely tonight that 4 runs may be the mark to reach for in this game, as neither team has been able to produce very many runs lately, and both pitchers are coming off back-to-back quality starts, so base runners will be key for the Rays this evening. That’s easier said than done with a lineup that has just one player hitting over .277 (Jeff Keppinger, .325), and points to Tampa’s inability to string together back-to-back hits and clutch hitting with runners in scoring position. Guys that have to step up tonight include Carlos Pena, who leads the team with 14 home runs, but has a .191 batting average, and Matt Joyce, who is coming off some back tightness but has a 4-game hitting streak going. B.J. Upton is another figure that manage Joe Maddon would love to see get going. Upton is due to have some improvement in his form against Baltimore, as he’s hitting just .143 against them this season, and was 0-for-3 in his only outing against Wei-Yin Chen. After two straight games with no hits, look for a bounce back from Upton to possibly be a difference maker for the visiting Rays.

Betting lines for the Baltimore Orioles vs. Tampa Bay Rays at Betonline Sportsbook.

The Baltimore Orioles at home tonight get -140 odds to win straight up on the money line, while the visiting Tampa Bay Rays are at +130 odds to win as underdogs. Both these teams have won 2 out of 3 games at home in the two series this year, with Baltimore winning the first 2 games of a 3-game series against Tampa at Camden Yards back in May. Tampa however should be consider a heavier underdog, considering the run of bad luck Hellickson has had, combined with the fact that they were held to just 2 runs in 2 games at home by the Seattle Mariners. With Baltimore seeking a 6th win in their last 7 games, and Wei-Yin Chen likely to have another solid start, the Orioles should be receiving plenty of bets on them to win straight up tonight.

Against the spread, Baltimore pickers will get +140 odds to see the O’s cover 1 ½ runs as favorites, while Tampa Bay pickers will be faced with a tough challenge to see Tampa stay within 1 ½ runs as underdogs at -160 odds. Despite Tampa’s two recent losses, both came by only 1-run margins, so in a good pitching match-up with two teams that are struggling at the plate, this could very well be a good opportunity to take Tampa to cover as underdog. The odds aren’t very worthwhile however, so we’d push on for better betting lines elsewhere.

Looking to better betting lines, the total runs line for the over/under is enticing at 8 ½ runs, with +105 odds going for the under wagers and -125 odds taking the over bet. With neither starting pitcher giving up more than 3 runs in their last 2 starts, and both struggling to get good run support lately, we are loving the opportunity to take the under wager at favorable odds here at Betonline sportsbook.

Keep all these wagering options in mind for what should be a tight, low-scoring game between two AL East teams battling it out for the AL Wild Card spots, and expect a great pitching duel to provide you with some good options for wagering on this match-up today at Betonline sportsbook!