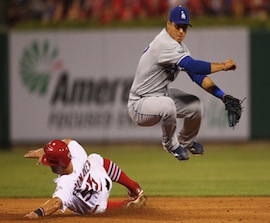 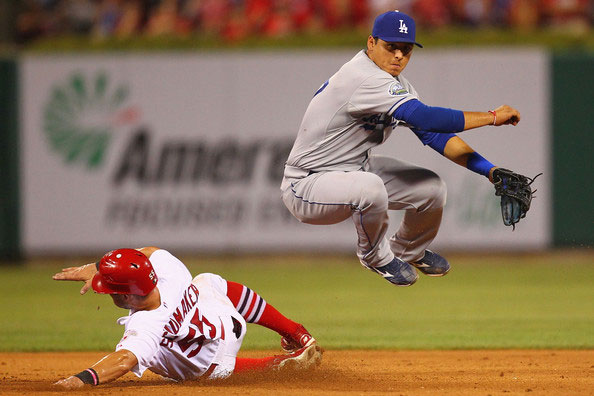 The St. Louis Cardinals (51-46, 27-21 home) were finally able to shake off an 8-game losing streak to the Los Angeles Dodgers (53-45, 24-25 away) last night, as the Cards’ bats came alive to put up 8 runs against Dodgers’ ace Clayton Kershaw in an 8-2 victory for Game 2 of the 4-game series between the two storied franchises. Tonight however St. Louis will be the ones looking to start a new, positive trend with a second consecutive win over Los Angeles, as they put out their staff ace Kyle Lohse (10-2, 2.71 ERA) for a great pitching battle with LA’s Aaron Harang (7-5, 3.46 ERA). Expect great betting lines, and an exciting Game 3 showdown at Busch Stadium tonight as game time is set for 8:00 PM ET in St. Louis, Missouri.

After dropping 5 of their first 6 games coming off the All-Star break by way of a dismal 6-game road trip, the Cardinals have completely reversed their fortunes at home, compiling 4 wins in their last 5 games there. Interestingly enough tonight’s starter for the Cardinals, Kyle Lohse, was the pitcher who pulled St. Louis out of their post-break funk, by winning 4-1 at home against the Chicago Cubs on July 20th. Tonight, he’ll seek a 4th straight win at home and a 5 consecutive victory overall, as well as a 10th straight quality start. There is no question that with Lohse on the mound at home (5-1, 2.61 ERA), who has helped St. Louis win 10 times in his last 13 starts there, the Cardinals should have the upper hand in this ballgame, especially is the St. Louis bats can contribute run support like they did last night against the Dodgers’ ace pitcher Clayton Kershaw.

Run support has been one thing very much lacking for Aaron Harang in this series, as he’s winless over his last 5 appearances against St. Louis (0-4, 3.94 ERA) due mostly to only getting 5 total runs of support in those outings. But fortunately for the Dodgers, Harang has been very sharp in his 3 starts this month (2-0, 2.37 ERA), and has typically gotten much more run support on the road than he has at home. One area of concern is the fact that St. Louis has been able to hit him pretty hard in his appearances against them either at home or away, as the STL lineup has amassed a .283 average in the last 6 starts he’s had, and is hitting .288 against him at Busch Stadium, where he’s 0-2 with a 3.86 ERA over the last 3 seasons. There is no question that command is going to be essential to Harang’s success tonight, as there is a tendency for him to give up a number of walks (he’s issued as many as 8 in one game this season). Harang can’t afford to put base runners on against a hard-hitting team like St. Louis, which ranks 1st in the MLB for on-base percentage, 2nd in batting average and 4th in runs scored this season. However, if Harang can keep his pitch count, as well as the ball, down tonight, and work around some key hitters that have tagged him in the past, there is a big potential for a low-scoring game that just may give way towards the Dodgers. That is of course with the provision that they can find some early runs against the dominating Kyle Lohse.

Luckily for Aaron Harang, it appears as though Lance Berkman won’t be in the line-up to face him, as Berkman has pounded Harang for 7 homers and 10 RBI in 58 career at-bats against the right-hander. That said though, there are a lot of other weapons in the STL line-up that could pose problems for Aaron Harang tonight, including the likes of Carlos Beltran, David Freese, and Rafael Furcal, who have all had plenty of success against tonight’s starter for the Dodgers. Carlos Beltran is working on a 6-game hitting streak and is .345 lifetime against Harang with 2 home runs and 5 RBIs, and should be one hitter that Harang will try to work around. David Freese is another key ingredient to the Cardinals success at the plate lately, as he’s been on fire in July hitting .429 for the month, and is 4-for-6 with a home run against Harang already. The former World Series MVP raised his batting average 16 points during a 7-game hitting streak, and will be a factor in this game one way or another. Lastly, watch out for the veteran shortstop Rafael Furcal to be a contributor for the Cardinals this evening at the plate. He is 10-for-21 (.476) against Harang over his career, and has 3 multi-hit games in his last 4 outings. While Furcal hasn’t hit very well at home this season (.243), he could very well be in line for another multi-hit game against a pitcher he’s been hugely successful against.

For the Dodgers in the past, they’ve actually had decent success hitting Kyle Lohse, with Lohse compiling a 1-1 record in 3 starts against them in the past few years, sporting a 6.06 ERA and a .284 opponent batting average. In his lone start against them at Dodger Stadium this season, he was tagged for 11 hits in 5 2/3 innings, giving up 3 runs in a 6-5 loss for the Cards back on May 20th. In his last outing against the Dodgers at Busch Stadium, Lohse fared even worse, allowing 8 runs in just 3 innings of work in a 13-2 loss back on August 23rd, 2011. So, while Kyle Lohse has certainly been dominant this season in general and at home specifically, the Dodgers do have some confidence that they can produce hits tonight, as the current batting line-up for LA sports a .299 average against him. Andre Ethier is hitting .357 against Lohse, and is due to get back on form after having his 9-game hitting streak snapped last night. James Loney has tagged Cardinals pitching this year (8-for-16), and has a .313 lifetime average against Lohse. Lastly Matt Kemp, who has propelled the Dodgers back into the race for the NL West, has caught fire hitting .341 for July with 4 multi-hit games in his last 5 starts. After going 0-for-3 last night, the .352 hitter for the season is certainly due to be a contributing factor this evening.

With the St. Louis Cardinals finally breaking through and stopping an 8-game losing skid to the LA Dodgers, the bookmakers have fully turned towards the Cardinals as the favorite in Game 3 tonight, giving them -150 odds to win straight up on the money line behind Kyle Lohse. With Aaron Harang’s history of no run support in this series, the money line has the Dodgers as +135 underdogs, which could be enticing for riskier bettors who expect to see LA come back strong against a St. Louis pitcher they’ve had plenty of success against.

Against the spread, there is likely going to be plenty of wagers aimed at the Cardinals, as their big bats at home are easily capable of pulling away with a +2 run victory. With the Cards getting +135 odds to cover 1 ½ runs tonight, expect the majority of spread picks going here. With -155 odds on the Dodgers to stay within 1 ½ runs as underdogs, the odds just don’t seem worth it considering the lack of run support historically given to Harang in this series.

For the over/under, the total runs stand at 9 for tonight’s match-up, with EVEN money going to the under pickers and -120 odds going to the over takers. The onus for over bettors has to be the Dodgers, and whether or not they can produce enough runs to help push the total runs over the mark. Expectations should be high though that while a few runs will inevitably creep up, this solid pitching duel should produce a low run total that runs close to, but not quite over the total runs line. Look out for a 4-3 or 5-3 result, with the St. Louis Cardinals taking another win tonight at home.