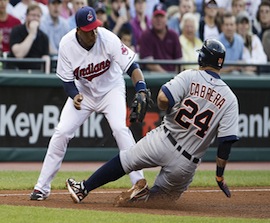 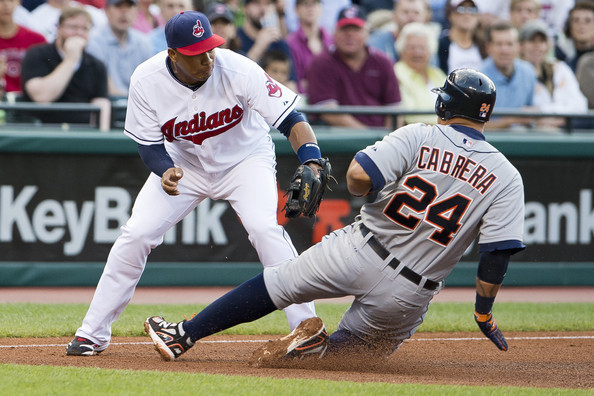 The Detroit Tigers (53-45, 25-24 away) have been tearing up Major League Baseball since coming off the All-Star break. Going 9-3 since the midsummer classic, Detroit has pulled even with division foes the Chicago White Sox, and now looks forward to an opportunity tonight to nab 2 games out of 3 in their series against fellow AL Central rivals the Cleveland Indians (49-49, 26-25 home), who are starting to show signs of fading away as the season progresses towards the playoffs. Nonetheless, with a rubber match for the 3-game series set for tonight between the Cleveland Indians and Detroit Tigers at Progressive Field in Cleveland, Ohio, and a tough 9-game road stretch coming up for The Tribe ahead, Game 3 will be a pivotal showdown that may have a lasting impact on both teams as they look to build confidence for sustained time away from their home ballparks.

Tonight’s pitching matchup is a beauty, with the Detroit Tigers’ ace Justin Verlander (11-5, 2.42 ERA) set to hit the mound against Cleveland’s Zach McAllister (4-2, 3.21 ERA). There isn’t much that needs to be said about Verlander that you probably don’t already know, aside from the fact that once again he’s one of the most dominating pitchers in the Major Leagues, and looks to be fully back on top form with three straight wins, all quality starts, in the last 3 appearances. In this match-up, there is no question Verlander will be looking for more run support, as his last outing saw him pitch very well to the tune of 8 innings with 2 runs allowed, but also saw the Tigers fall in a 2-1 game as he was outdueled by Justin Masterson. Verlander has no difficulties finding success at Progressive Field, where he’s 5-2 with an ERA hovering around 3.30 in his last 8 starts there. Cleveland has been unable, much like most MLB clubs, to find good contact against the fireballer, with the Indians batting just .192 against him over those past 8 starts. Therefore, in order for Cleveland to stay in this game tonight, given the advantage on offense also going to the Tigers and their big bats, the Indians are going to have to get a huge, standout performance from Zach McAllister, who is certainly capable enough of producing a big game with few runs put up for the opposition.

McAllister, while being a rookie call-up this season, has continued to show poise that even the most veteran pitchers in the league would be envious of. Since debuting in the majors back on May 7th and starting 9 games, he’s just once given up more than 3 runs in an outing, and has held his opponents to 5 or fewer hits in his last 3 starts. McAllister is 2-1 with a 2.49 ERA in the month of July, and has seen his win total increase and his ERA fall over each month he’s pitched. He pitched very well in his lone outing against Detroit back on May 23rd, contributing 6 1/3 innings of work with just 2 runs given up, but took no decision in a 4-2 victory. The big factor in that game, and in tonight’s match-up is McAllister’s control. He gave up no walks against the Tigers, and despite allowing 8 hits, he stayed balanced enough to not get in trouble with runners on base. Key for him tonight is recognize that a good-hitting team like Detroit will get on base, but preventing runners in scoring position, and preventing unnecessary free passes on the base paths will be critical to his success. There will be plenty of pressure on the 24 year old kid tonight against a former Cy Young award winner, but if the Indians can get 6+ innings out of McAllister and have him hold Detroit to 2 or less runs, they will most certainly be in contention come time to hand the ball off to Cleveland’s pen.

On the hitting side of things tonight, the usual suspects will be the ones to watch for on the Detroit side, as Prince Fielder, Miguel Cabrera and Austin Jackson are always on their hitting game it seems. Fielder walks in hitting .343 for July, and as he’s yet to hit off Zach McAllister (0-for-3 in his only game against him), there is likely the chance that the big guy will find success tonight. However, the biggest bat in the Tigers lineup to be wary of is that of Miggy Cabrera, who is having another ridiculous season hitting .328 with 24 home runs and 82 RBIs. He went 2-for-5 against McAllister in his only chance seeing the rookie back in May, and is hitting .382 for the month of July with 8 homers and 20 RBI. He has 6 homers since the All-Star break, and with McAllister having a tendency to be a fly-ball pitcher, this could be a scary situation for the rookie on a number of occasions. Expect Cabrera to be pitched around a lot tonight, but don’t be surprised if he puts one over the fences, having taken Cleveland pitching deep 3 times already this season. Lastly, Austin Jackson should be a contributor at the plate tonight, as he gets on base even when he doesn’t get hits, and is bound to get back on a hot streak of run scoring (up until July 17th he scored in 12 straight games).

For Cleveland, their bats have actually had plenty of experience against Verlander, with varying degrees of success over a combined 383 plate appearances. Michael Brantley has hit exceptionally well in his 3-year stint against Verlander, compiling a .474 batting average (9-for-19) against the Tigers ace. Brantley is hitting .327 for the month of July, and despite slumping in the last week (5-for-26), he could be a key contributor against a pitcher that is hard for anyone to hit. Cleveland could sure use a boost from Jason Kipnis, their leading run producer with 53 RBIs on the year, but he’s just 0-for-6 against Verlander. However, with Kipnis often finding hits coming in pairs after an 0-fer night, this could be a game in which he busts out with some success. Other Cleveland hitters to keep in mind are Shin-Soo Choo, who is keeping on pace batting .305 for the month (but just .214 against Verlander in 42 at-bats) and Asdrubal Cabrera, who is another key run producer for The Tribe. While neither player has had much success against Justin Verlander, they’ll both need to find a way to get on base, and/or help produce a run or two if Cleveland is to avoid their 9th loss in their last 14 games.

Betting Lines for the Detroit Tigers vs. Cleveland Indians at TopBet sportsbook.

With Justin Verlander on the mound against rookie Zach McAllister, the Detroit Tigers take the advantage on the money line getting -180 odds to win straight up. Cleveland is a +160 underdog at home, as the bookmakers put big odds against them being able to overcome a surging former Cy Young award winner. With Verlander itching to get back at Cleveland for his loss against them earlier this season, and hitting top form coming off the All-Star break, it’s safe to presume that the easy bet will be taking Detroit straight up on the road to nab 2 out of 3 from the Indians this evening.

Against the spread, the Indians will get 1 ½ runs to play with as underdogs, with EVEN money going to those willing to bank on Cleveland being able to keep this game close. After two close games in this series before tonight, it’ll be a tough call banking either way here, with Detroit getting decent odds at -120 price to cover 1 1/2 runs as favorites. However, with Verlander likely to give up less than 2 runs this evening, and with a rookie being seen by the Detroit lineup for the second time around. Chance grow exponentially that Detroit’s bats will be the difference maker here this evening, and push the young McAllister out of the game earlier than expected.

For the over/under, there’s a tight 7 runs available for the total runs, which could entirely hinge on how many runs Detroit is able to put up themselves. We don’t expect hardly anything being given up by Verlander this evening, so if the rookie McAllister can have another decent outing against Detroit, this game will be staying under the total runs, giving EVEN money odds to under pickers. Though the bookmakers show that -120 odds are going towards the over bet, indicating a slightly higher chance of a breakout, we’re awfully reluctant to take the over wager on any game in which Justin Verlander is involved in. Detroit could blow up for certain, but the smart money might be on a low-scoring affair here this evening.