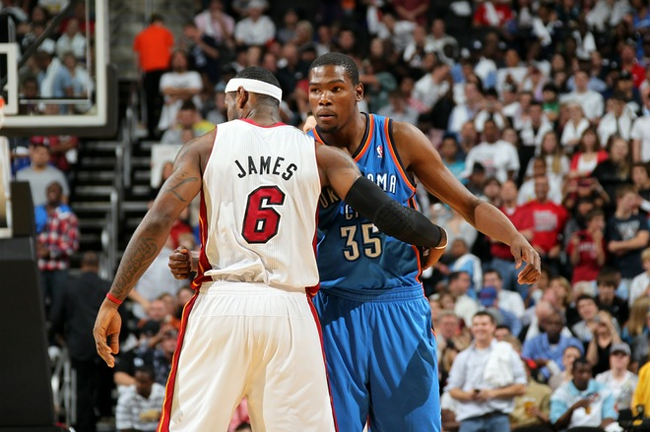 With 13 days (and counting) until the NBA season tips off proper, it’s time to take a look at the top MVP candidates this season.

Whilst fans, ‘experts’ and TV analysts may deem it far too early to be considering end of season trophies, bettors know that now is the time to get in on some early action, before it becomes clear that Dwight Howard’s back will prohibit his performance, Derrick Rose’s injury will keep him out all year, or Paul Pierce will return even bigger than he did following last summer’s lockout. Of course, we don’t know if any of that is true, but that’s what makes betting now so fun, not to mention profitable.

Preseason MVP odds are seriously lopsided. In fact, consider them ridiculously lopsided. In a season that oddsmakers believe will be dominated by the ‘Big Three’ of Miami, the Lakers, and Oklahoma City (see our reports on the Western and Eastern Conferences), no fewer than six players associated with those teams top the potential MVP lists. Six!

Top of the heap is reining League and Finals MVP, LeBron James. The Miami forward is considered 9/5 to lift the Maurice Podoloff trophy, on the back of outstanding performances last season. ‘King’ James averaged 27.1 points, 6.4 rebounds, 6.2 assists, 1.9 steals, and 0.8 blocks per game in what was the best all-around performance the NBA has seen in quite some time. Of course, he also led the Miami Heat to the NBA championship.

An MVP award this season will put LeBron James will tie the Miami forward with Wilt Chamberlain (4), putting him just one behind Michael Jordan (5) and two behind all-time leader Kareem Abdul-Jabbar (6).

James’ nearest rival – at least in the bookies’ eyes – is his Finals rival, Kevin Durant. Durant (15/4) has consistently made himself a better player since being drafted by Seattle in 2007. Last season’s 28.0 PPG average marked the third straight season that the Oklahoma City forward led the league in scoring. 2011-12 was also the third straight season in which Durant was named to the All-NBA first team.

Wouldn’t you know it; number three on oddsmakers’ lists is Lakers guard, Kobe Bryant (12/1). Remarkably, despite his position at the top of the game for the past 15 years, Bryant has only ever won one MVP award (2008). Having been surrounded by superstar players for much of his careers, it appears voters have shied away. Don’t expect that to change this year, with the addition of Steve Nash and Dwight Howard to the Laker arsenal.

Now, let’s give it up for the Clippers’ Chris Paul and Minnesota’s Kevin Love. Both considered 20/1 to take the award. This makes them the first players to be in the MVP discussion not wearing a ‘Big Three’ jersey. Paul is a legitimate candidate, due to his leading a side that should improve on last year, and could be up there at the end. Love is less of a contender mainly because while his Timberwolves side looks to be better this year, it still doesn’t look like a serious playoff threat, and regardless of what anybody says, voters will take that into consideration.

Next up: Deron Williams. The Brooklyn point guard avoided a potential offseason pitfall, quickly inking a deal with the Nets before heading to London to win an Olympic Gold Medal. Much of the star-baiting that was expected failed to materialize due to the quick signature, which means Williams has been able to focus on nothing but on-court action this summer. This will undoubtedly help him going forward, with new team mates and a brand new arena. At 25/1, Williams is a longshot for MVP, but if he were to somehow lead the Nets to a high finish, it’s not beyond the realms of possibility.

Other notable contenders include former MVPs Dirk Nowitzki (30/1), Derrick Rose (50/1) and Tim Duncan (60/1), but all would have to be considered very longshots. Check below to see who else made the top 25.