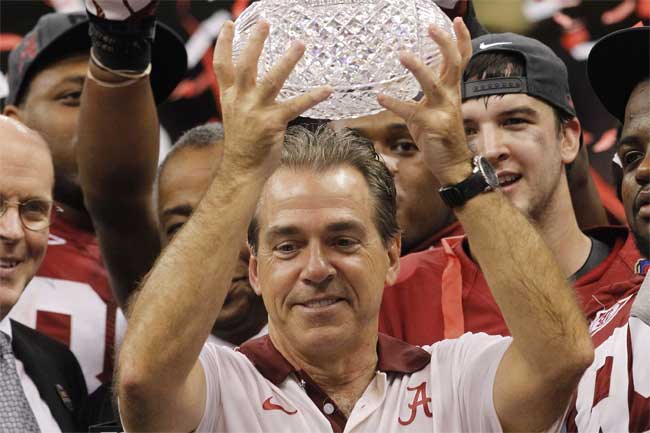 Saturday night sees the eagerly-anticipated showdown between No. 1 Alabama and No. 5 LSU, a rematch of last season’s BCS National Championship Game.

It’s true that the Tigers’ loss to Florida in Week 6 has rubbed some of the shine from this one – it’s not being billed as the ‘Game of the Century’ this year – but make no qualms about it, this is still one huge game, and one that we’ll see in primetime.

A Rematch for the Ages?

Saturday’s game will be the third meeting between these sides in (just) under a year. We don’t need to spend hours rehashing last year’s regular season win for LSU or Alabama’s national time win in January. We all remember what happened then. The question is what will happen now?

Alabama makes the trip to Baton Rouge, La., with an unbeaten record and nine straight weeks at the top of the rankings. LSU awaits hoping a victory will catapult the team to the SEC Championship Game in Miami at the very least, and even return the team to the national championship conversation. A slipup by Notre Dame or Kansas State before the season is out could make that a very real possibility, providing the Tigers win this weekend.

Alabama has the number one defense in the country, conceding just 8.1 points per game, which will put scoring at a premium for the Tigers, who average 31.0 PPG. The Tigers’ defense is no slouch either, conceding just 14.6 PPG (9th). It looks unlikely that Alabama will reach the 40-points it averages this season.

Both teams are likely to build their game around these tough defenses and their exceptional running games. The Tide is 22nd in the country when it comes to rushing the ball (214.4 YPG) while LSU is nipping at those crimson heels at 24th (208.4 YPG). If you’re not one for a war of attrition, don’t tune in Saturday night.

At Home On the Road

LSU enters Saturday night’s big-time clash with a 22-game home winning streak, the longest current streak in the FBS. Tigers Stadium has become a fortress, a smelting pot of noise, intensity and terror. Few visitors that pass onto the field emerge with anything but a big fat loss. That gives the Tigers a huge advantage, right?

Wrong. The Alabama-LSU rivalry is somewhat unique in College Football in that the road team has emerged victorious more times than not. The current road record in this rivalry stands at 28-13-1. LSU has posted a 12-9 record when traveling to the Cotton State. Alabama has posted an even more impressive 16-4-1 record when visiting Baton Rouge. So home field advantage could well be tossed out of the window come Saturday night.

Alabama has dominated the all-time head-to-head, compiling a 45-24-5 record against its SEC West rival. The Crimson Tide won 21-0 last time out in a small affair known as the BCS National Championship Game.

LSU however has ruled the roost in recent history, winning two straight before last January’s loss. Those two wins came as the Tigers won seven from nine, and nine from 12, dating back to 2000. Make no mistake; LSU is not scared of the Tide.

As Alabama dispatched of the previously unbeaten Mississippi State last weekend, LSU took a week off to prepare for this weekend’s epic showdown. We all know a bye week ahead of a big game can be the biggest advantage a team takes into a game, and it’s something LSU has made good use of over recent seasons.

Following a bye week, LSU is 5-1 over the last six seasons. Those five wins include three victories over Alabama. Looking back further, LSU’s résumé includes a fourth post-bye week victory over Alabama back in 2004. You have to go all the way back to 1996 to find an Alabama win over the Tigers following an off week. That is surely advantage LSU. Alabama fans will be relieved to hear that the one loss LSU has faced in those six games was to another No. 1 ranked side, Florida.

Tigers coach Les Miles has guided his team in three games against No. 1 ranked opposition. In 2007 LSU defeated Ohio State, before losing to Alabama in 2008 and Florida in 2009. A win in Baton Rouge would round that record out to a neat .500, whilst a loss would lend itself to questioning whether he has what it takes to beat the best of the best.

One final consideration to mull over; the two sides have met on November 3 just twice before (2001, 2007) with LSU winning both encounters on the road.

Despite hitting the road this weekend, Alabama opened as 8-point favorites to defeat the Tigers. That number has already risen to 10 with some bookmakers, and is likely to see more movement in the 72 hours or so we have left until kickoff.

Alabama is 5-3 against the spread this season while LSU is 3-5, including 1-4 over the last five. The Tigers are 2-4 ATS in their last six home games. 61 percent of bettors are currently backing the Crimson Tide to cover the spread.

The over/under is 42, with 64 percent of bettors opting for the under at this time. The total has gone under in three Alabama games and four LSU games this season. More tellingly, in the 74 meetings between these two sides, the final score has totaled more than 42 points just 13 times (.176), suggesting the under is the smart choice here.