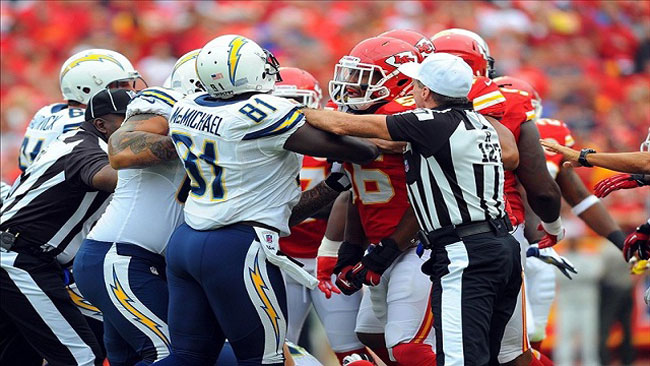 Two AFC West teams facing nasty skids take the field at Qualcomm Stadium tonight and one of them will look to get the 2012 season back on track with a much-needed win.

After starting 3-1, the San Diego Chargers have dropped their last three games, including a second half meltdown against Peyton Manning and the Broncos and an embarrassing 7-6 loss last week against the Cleveland Browns of all teams. The Chargers are at home this week, hosting the lowly bottom-feeder Chiefs, but the Bolts can’t feel too comfortable. They did just lose to the Browns after all and they have dropped their last two contests at Qualcomm, so home field advantage hasn’t been such an advantage, at least so far.

Things have been even worse for the 1-6 Chiefs, who have lost four straight, including one to these very Chargers. In fact, San Diego’s last win came these two teams met, which was week four at Arrowhead. The Chiefs have still yet to hold a lead in regulation in any game this season, as their only lead and win came in overtime against the New Orleans Saints on Sept. 23. Kansas City is now in danger of losing five straight for the first time since 2009.

San Diego hopes to exploit KC’s defense, which is allowing 29.9 points per game. The Chargers should look to run Ryan Matthews plenty against the 22nd ranked rush defense. Matthews has been the steady Eddie for the Chargers so far this season, averaging 4.3 yards per carry.

The Chiefs meanwhile will hope to find any kind of consistency on either side of the ball. Quarterbacking has been one of several issues this season and Matt Cassel will be back under center this week after seeing Brady Quinn take a blow to the head versus the Raiders a week ago. Cassel has had his share of struggles, throwing six touchdowns and 10 interceptions already this year. For the Chiefs to be successful, they may also have to stick to the run game with Jamaal Charles, who is averaging 5.0 yards per carry and has nearly 600 yards rushing this season.

You don’t have to look at this game from many different angles to determine who the favorite is here. The Chiefs are the biggest mess and possibly the worst team in the NFL and is a team that San Diego has already beaten this season. Add in the fact that the Chargers are at home and I think you have to give the solid edge to San Diego. The Bolts are currently nine-point favorites and although I like them to win today, I do also realize that they are playing poorly as well. The Chargers are one of those teams that could suddenly wake up and start scoring points, but considering they were held to six points by the Browns, I have to say the Chiefs will cover +9 today. Take San Diego to improve to 4-4, but in a closer game than many might think.