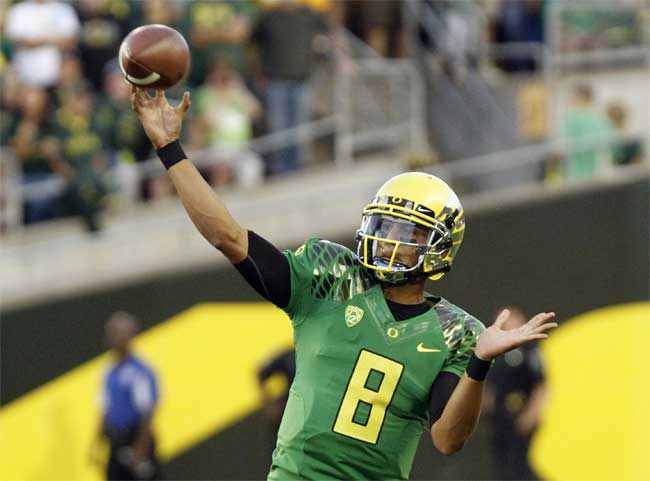 After a killer slate of college football last weekend, the activity and excitement at the top of the BCS standings does anything but let up this weekend.

There may not be as many high-profile games this week, but there just happens to be two that are about as high-profile as you can get.

First, #4 Oregon travels to Los Angeles to take on #17 USC in what many predicted in the preseason to be a dress rehearsal for this year’s Pac-12 Championship Game. Whilst that remains to be seen, there’s still a huge importance placed on this clash.

Then, #1 Alabama hits the road to take on #5 LSU in a rematch of January’s BCS National Championship Game. Simply put, this one needs no introduction.

If you were passing on through CasinoReview yesterday, you might have read our preview of this weekend’s massive Alabama-LSU showdown. If not, be sure to read it now. There’s a bunch of stuff in there that might change your mind (back and forth) before you click your picks this weekend.

Of course, there was one thing our preview didn’t tell you: who’s going to win. How about we do that now?

We know what to expect of the game: lots of running the football and plenty of defensive stops. But who will win out?

Odds: Alabama is currently 10-point favorites to take the victory in Death Valley, despite the Tigers’ 22-game home winning streak. The over/under is 42.

Take: Alabama – There are a lot of factors that point to LSU taking this one (that home-field advantage, the Tigers’ record after a bye week, LSU’s recent regular season dominance) but ultimately Alabama has done nothing this season to suggest that it will do anything other than win another game. Granted, this is the toughest test the Crimson Tide has faced this season, but LSU’s weaknesses, particularly the lack of an aerial game, don’t stack up well against this Alabama side. It will be close though so take LSU to cover the spread. Take the total to go under: if you want a shootout, you’ll do better to wager on our next fixture.

This weekend’s other big encounter will go a long way to demonstrating how good Oregon (8-0, 5-0 Pac-12) is or isn’t.

The Ducks have been heavily criticized for a soft schedule and for sending out second tier players when the game gets out of hand – which it does on a weekly basis. This week’s clash should start answering such criticisms. With Stanford and Oregon State still on the schedule, we’ll know for sure come the end of the season.

USC (6-2, 4-2 Pac-12) has lost twice this season, to Stanford in Week 3 and last week in Arizona. Both losses were considered upsets. It has been over a year since the Trojans lost to Stanford at the Los Angeles Coliseum, the last time the side lost a home game.

The last time Oregon lost a game was last November when the Trojans traveled to Eugene. That loss broke the Ducks’ two-game winning streak over USC. Oregon has won three of the last five against its Pac-12 rival.

Odds: Betting opened with Oregon favored by six points. That number has increased to 8½ as we’ve closed in on kickoff. The over/under is 70.

Take: Oregon – In many ways it wouldn’t be a huge surprise to see USC topple Oregon, but those performances against Stanford and Arizona are fresh in the memory, and if the Trojans can’t beat those teams, they can’t beat the Ducks. That being said, this is unlikely to be the bulldozer job we’ve seen from Oregon all season. Still, take the Ducks to cover the spread. Going over 70 points might be a tall ask, but the last two times these teams have played, they’ve done just that. Oregon leads the nation in points and USC doesn’t exactly have a defense to write home about. Take the over then if you’re looking for a few extra bucks.