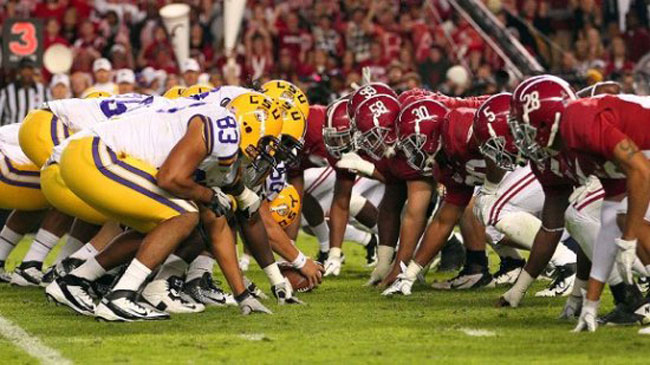 Teams ranked #1 and #2 in the BCS will have their work cut out for them today as they each will face tough tests in week 10 and will need to pass in order to not only stay unbeaten, but also to stay alive in the chase for the elusive NCAA Championship. Here is a breakdown of each game, what to look for and who to pick on the spreads. Good luck!

The rematch of last year’s National Championship once again figures to be a huge game in deciding who plays for the title this season. Alabama has looked absolutely flawless on both sides of the ball, but tangling with the Tigers always proves to be tricky and dangerous, even for the best team in the land. A loss for Alabama would not only mean they might miss a chance at repeating as champions, but it may take them out of the SEC title game as well. There is certainly a lot riding on one game, but these teams wouldn’t have it any other way.

LSU beat Alabama once last year (regular season), so there’s no reason to think they can’t do it again, but I don’t think they will do it this time. This Bama team is the best we’ve ever seen. This is a squad that scores 40 points a game and gives up eight. Even home field advantage won’t be enough for the Tigers to pull this one out. However, I do think LSU can cover the +7.5 spread in the loss. Alabama will be tested, but it will win today.

K State has also looked pretty unbeatable so far in 2012. The Wildcats have rolled through their schedule will no signs of slowing down, but if you remember Oklahoma State was on the same path last season and then slipped up on the road against Iowa State. Needless to say, the Wildcats should not take the Cowboys lightly, especially considering many players from that great squad last year will be playing today.

Even without last year’s QB Brandon Weeden, Oklahoma State is the best ranked offense in the country this season, putting up 586.1 yards of offense per game. Both teams score more than 44 points per game, so it will come down to whose defense will be able to stop the opposing offense. Oklahoma State has struggled on the defensive side at times, but is better than many might think, allowing just 23.1 points per game. K State, meanwhile, is allowing only 17.1 points per game and has already beaten the high-scoring offenses of Oklahoma and West Virginia.

I think this will be another near upset, but that K State will pull this one out at home. I do like OK State to cover the +8 point spread though and make this a one-score contest.