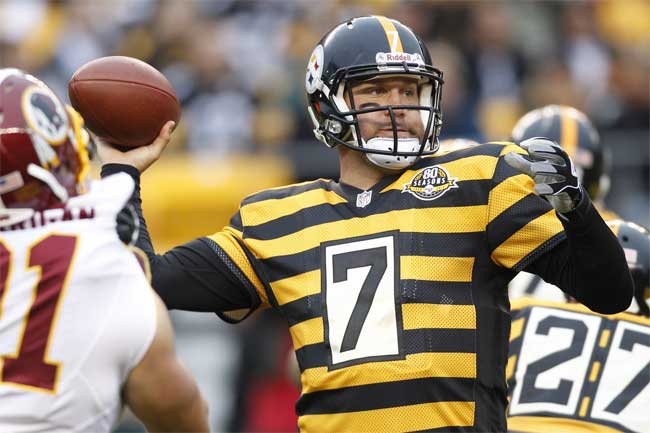 It’s the midpoint of the NFL season and Week 9 promises a lot of close matchups as teams look to improve their records heading into the second half.

As ever, there is no shortage of talking points heading into play on Sunday. Can the Ravens hold off the Browns? Will Jacksonville win another game this season? Can Atlanta remain unbeaten?

To get you started with your picks this week, we’ve skimmed some of the more intriguing games from the schedule and given you our thoughts.

Be sure to come back tomorrow also for an in depth look at the Sunday Night Football clash between Dallas and  Atlanta.

A much-maligned Carolina (1-6, 0-3 road) hits the road this weekend, heading for Landover, Md., and a showdown with the Washington Redskins (3-5, 1-2 home). Make no mistakes; this one’s on the radar thanks to its pitting Robert Griffin III against Cam Newton.

Newton has had a tough season, something he’s struggling mentally to cope with, while Griffin is having the sort of season Newton enjoyed last season. Whilst the issue of whether or not these two quarterbacks are similar has been on the agenda this week, there’s one these two certainly have in common: both will be looking for a win this weekend.

Carolina has posted a dismal record, particularly after hopes were so high ahead of the season. Washington, meanwhile, has had what can be considered a successful year, mainly because expectations were low coming into the season.

The Skins have been free-scoring this season, ranking fourth in the league in points, at 26.6 per game. The team’s running game is tallying 166.3 YPG, second only to San Francisco, and will be the focus in this one.

Carolina should take solace in the fact that Washington isn’t exactly a defensive juggernaut. The Redskins are last in the league at stopping the pass, conceding 314.3 YPG through the air, whilst giving up 28.4 total points per game (29th). That should give Newton and the Panthers some time to work out an offensive scheme.

Odds: Washington is 3½-point favorite, with the over/under at 47½.

Take: Carolina – The Panthers have been woeful this season but this is the sort of game the side from Charlotte can take an upset win from. Defensive will be at a premium, so Carolina should make this a shootout. Running the football would be a good idea for both sides. Take the over for those same reasons.

It’s being billed as the battle of two rookie quarterbacks, but this game has more going for it than just the clash between Andrew Luck and Ryan Tannehill.

Both Indianapolis (4-3, 3-1 home) and Miami (4-3, 2-2 road) have surprised a lot of people this season. Neither has been the automatic out some would have expected, and at the end of this game, one of these sides is going to have a 5-3 record!

Miami will focus on trying to run the football, a decision that is as much to do with the Colts’ inability to stop the run (27th) as the Fins’ abilities to run (11th). On the flipside, Luck and Indianapolis will look to throw the football to take advantage of a top ten passing offense, and to exploit Miami’s poor pass defense (27th). Besides, Miami is second in the league at stopping the run and the Colts’ running game is less than stellar.

Odds: Miami opened as three-point favorites but that number has fallen to one. With 24-hours left until kickoff, we could see some more movement there. The over/under is 43.

Take: Miami – This one will be decided by Miami’s defense, which currently gives up just 18 points per game. Only Chicago and San Francisco concede fewer points. The Dolphins have played tough all season, while the Colts have had a mixed-bag of performances. The Dolphins will cover the low spread, snapping the Colts’ three-game winning streak in the series. Take the under on 43.

Much of the East Coast is still reeling in the aftermath of Hurricane Sandy, but regardless of whether you think the game should go ahead or not, the New York Giants (6-2, 3-1 home) will host Pittsburgh (4-3, 1-3 road) late Sunday afternoon.

With the team hotel flooded, the Steelers will fly in on the morning of the game, a factor that many believe gives the Giants an advantage. In reality, it’s a short flight and a later game so it probably won’t be that big a deal.

The Giants have the second best passing offense in the league, behind New England, but it’ll be up against Pittsburgh’s number one ranked pass defense. If the two cancel each other out, as they could well do, it’ll be up to the running game to put points on the board. Neither side has been particularly prolific running the football this season, but the advantage may come down to Pittsburgh’s superior rush defense, which ranks in the league’s top ten.

Historically, New York has dominated the head-to-head (44-28-3) but recently, neither team has been able to string two wins together in a row. The Giants won last time out (2008) so unless they buck a trend that dates back to 1991, it could be bad news for the blue side of New York this weekend.

Odds: The Giants opened as 4½-point favorites but have seen that figure drop to 3½ recently. The over/under is 47.

Take: Pittsburgh – The Steelers are a tough team, despite a mediocre record. Last week the side won its second straight game for the first time this year. The Giants may have won four in a row, but they’ll face a very tough defense. With the distraction of Hurricane Sandy, it’ll be tough to get past the Steelers. Take the total to go under; this is going to be a defensive battle.