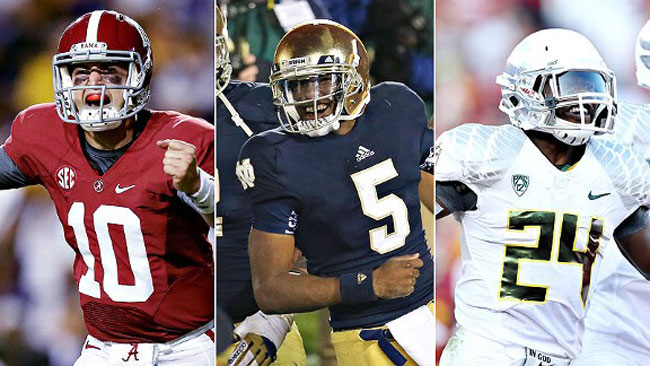 Although the nightmare of the BCS is almost over, college football fans and bettors still have to put up with it for the rest of this season and all of next season. There has been some shifting in the computers in recent weeks even though none of the remaining four unbeaten teams has dropped a game. This week all four won again, but the Oregon Ducks were able to leapfrog Notre Dame into third position, but of course to clear everything up, we all would hope that only two undefeated teams were left standing at the end. Otherwise, the decision on who goes to the title game is left up to the computers. Ugh. Nobody wants that.

The Fighting Irish pulled off another thrilling comeback, but the 29-26 OT win against an unranked Pittsburgh ultimately cost them their number three slot as they fell in the computer rankings. The amount of close games Notre Dame has won does show they have plenty of resilience and clutch players, but it also shows that they don’t have the firepower to really put teams away and if they play enough of these close games, eventually they will get burned. The Irish have two very winnable games coming up against Boston College and Wake Forest, but then they finish on the road at USC against a high-powered offense. For Notre Dame to get to the promised land, it has to win out and hope some others fall.

The Oregon Ducks jumped up one spot this week after they took care of USC 62-51. Although the Ducks’ defense got gashed, the computers and the pollsters were overly impressed by the Ducks’ offense, which torched a 17th ranked USC team with over 700 yards of total offense. It was the first game in which the Oregon starters played all 60 minutes, so we can only imagine the type of numbers they would have if they played all game each week. Since Oregon finished the season with two ranked opponents (Stanford, Oregon State) and the fact that they get an extra game in the Pac-12 title game, the Ducks are a favorite to reach the National Championship if they win all their games, which by the look of things, is fairly probable.

The Kansas State Wildcats were more than thrilled to pick up their ninth straight win of the season on Saturday, 44-30 over Oklahoma State, but they were not thrilled to see Heisman-hopeful quarterback Collin Klien leave the game with an injury. The team did not address the extent of that injury, but needless to say, if he missed even one game, K State’s perfect season will be in jeopardy. Kansas State faces off against TCU this weekend and finishes with Texas, so it won’t be easy, but if K State keeps playing like they have all year and if Klien is healthy, they very well could run the table.

The Tide rolled on this week, but just barely as they needed a last minute touchdown to beat LSU on the road 21-17. The close win didn’t phase voters or the computers like ND’s did because LSU was #5 coming into the contest. Now with their toughest test out of the way, it appears that the Crimson Tide will have little resistance on their way to another National Championship berth. They do have Texas A & M this week, but it’s a home game for the Tide, who have played even better in Tuscaloosa this season. The other teams can only hope that Bama loses its SEC title game or else the national title will once again go through the state of Alabama.