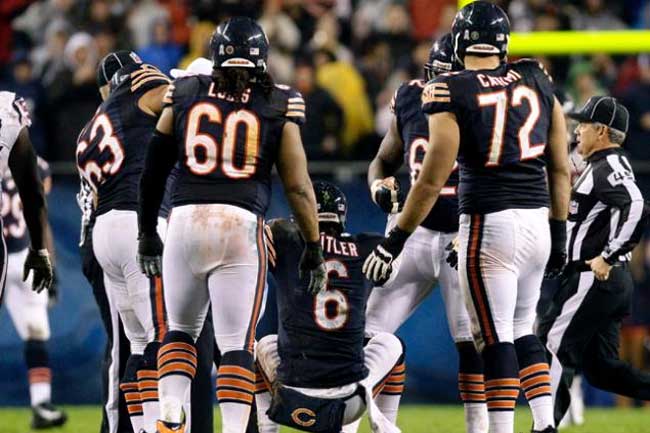 There’s a big ol’ battle brewing out on the West Coast tonight as the Chicago Bears travel to San Francisco. We already know Chicago quarterback Jay Cutler (concussion) is out, but we’ll have to wait until closer to game time to find out whether his San Francisco counterpart, Alex Smith (concussion), will be absent too.

Monday Night Football closes out Week 11 of the NFL just in time for Thursday’s Thanksgiving festivities and football kicks off.

Read on to pick-up a few handy tips that could be the difference between a payout and an empty wallet come Tuesday morning.

Monday night’s ‘Concussion Bowl’ resonates with serious implications, both in terms of game results and the health of players. Whichever team loses – providing there is a loser; take note San Francisco – will be facing a loss of momentum thanks to last week’s results: a loss for the Bears and a tie for the Niners.

It’s unlikely that Chicago (7-2, 3-1 road) would have been favored heading into this one even if Cutler was taking the field, but the Bears’ defense always ensures there’s a chance. The offense is a different story though.

A victory for San Francisco (6-2-1, 3-1-1 home) will open up some valuable daylight between the Niners and the trailing Seahawks, who are idle this week.

Odds: San Francisco opened as 4½-point favorites but news of Cutler’s absence has increased the spread to seven with some bookmakers. The over/under is a paltry 36½.

Take: San Francisco – Yes the Niners potentially have an advantage with Cutler definitely being out and Smith maybe absent. But forget that. Here’s a reason to bet on the Niners; the Bears have not won in San Francisco since October 13, 1985. Yes, 1985! That period encompasses seven straight losses, and while this sort of record was meant to be broken, don’t expect it this season. Take the Bears to cover the spread in a close game, with the total going under; this could easily end up 14-10 or similar.

Let’s be honest, Milwaukee and Charlotte aren’t the first two names you expect to see on a list of intriguing NBA match-ups but welcome to the 2012-13 NBA season.

The Bucks (6-2, 3-0 road) are actually one of the Eastern Conference’s frontrunners so far this season, leading the Central Division and one of only six teams with a winning record in the East.

The Bobcats (4-4, 3-2 home) meanwhile are one victory from having a winning record in a season that has looked, well, not terrible so far this season. They’ve beaten the Pacers, Mavericks and T’Wolves, so it’s not all about beating up on the Wizards – they’ve done that too – so there’s a little hope floating around North Carolina.

Odds: The Bucks are a rare road favorite on Monday’s NBA slate, with the spread at 3½ in Milwaukee’s favor. The over/under is 193½.

Take: Milwaukee – Expect Monta Ellis and the Bucks to take their unbeaten road streak with them to Miami on Wednesday, whilst covering the spread in this one. Take the under on the total; while the Bucks are high-scorers (5th in the league), the Cats won’t keep their end of the scoring bargain.

After an impressive start to the season, the Los Angeles Clippers (7-2, 2-0 road) faces a first tough road trip of the season, a four-gamer that commences in San Antonio (8-2, 4-1 home).

The Clippers knocked off the Spurs at Staples two weeks ago so there’ll be a waft of revenge in the air. The Spurs lost a close game to New York on Thursday before bouncing back on Saturday against the Jekyll and Hyde-like Nuggets.

Take: San Antonio Spurs – Five wins on the bounce for the Clippers, including victories over the Spurs, Heat and Bulls, would suggest that an upset here wouldn’t be the biggest surprise, but San Antonio is a tough place to go and get a win (the Spurs had the league’s best home record last year). Expect this to be close though, with the Clippers covering the spread, while the total goes under.