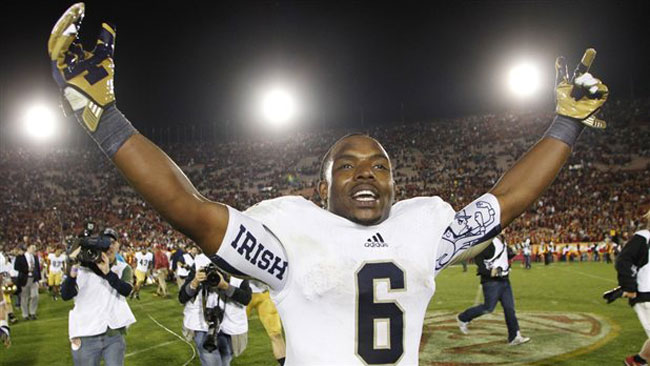 With the conclusion of week 13 comes the end to most of the confusion in college football and the BCS bowl picture. Notre Dame officially earned its trip to the 2013 BCS National Championship game with its 22-13 win this Saturday over the USC Trojans on the road, improving to 12-0 and finishing the season as the only undefeated team in the nation. The question of who they will play is yet to be decided by the SEC Championship game, but with it being down to just two possible teams, we can go ahead and look at the potential match-ups.

Five teams entered the week with hopes of playing for a national title, but there was only room for two. Notre Dame rose to the occasion and handled the pressure by winning its 12th straight game in 2012. Just as they had all year, the Irish defense put a stop to their opponent, even backed up defending the goal line from one yard out.

“We’re going to fight,” Notre Dame linebacker and Heisman candidate Manti Te’o said via ESPN.com. “That’s our name. It doesn’t matter where we are.”

Theo Riddick rushed for 146 yards and Everett Golson threw for 217 more as the Irish completed their first perfect regular season since 1988. The stroired program’s streak of down years has been well publicized, but its been a return to prominence in 2012.

Meanwhile, the two biggest title contenders out of the SEC, #2 Alabama and #3 Georgia, both easily dispatched of their rivals this week, launching them into one of the most anticipated and significant match-ups of the season that will ultimately decide who plays Notre Dame in the championship game. That game, the SEC Championship, will take place next week in Atlanta.

Either one would prove to be a difficult match-up for the Irish, who don’t score a ton of points (26.8) per game, but Notre Dame’s defense gives them a chance to win any game, as it has done this year, allowing only 10.3 points per game (2nd in the nation).

Georgia actually may be the more balanced team. Ranked 35th in rushing, 39th in passing and 16th in points allowed, the Bulldogs can do it all. If the Dawgs play their best game, they are likely to beat anyone.

Bama doesn’t do as much through the air, but as we know, it is the defending champions and the only team with a better defense than the Irish, allowing just 9.3 points per game. A match-up between Notre Dame and Alabama would certainly be low-scoring, but the advantage would likely go to the Crimson Tide, considering not just their recent history, but the the recent history of the SEC’s dominance.

A match-up between Georgia and Notre Dame would similarly give the edge to the SEC squad, but the Bulldogs might even be a bigger favorite with their offensive weapons.

Look for the winner of the SEC Championship to be the favorite in the title game and unless Notre Dame can continue its magic this season, expect the SEC to reign supreme once again.