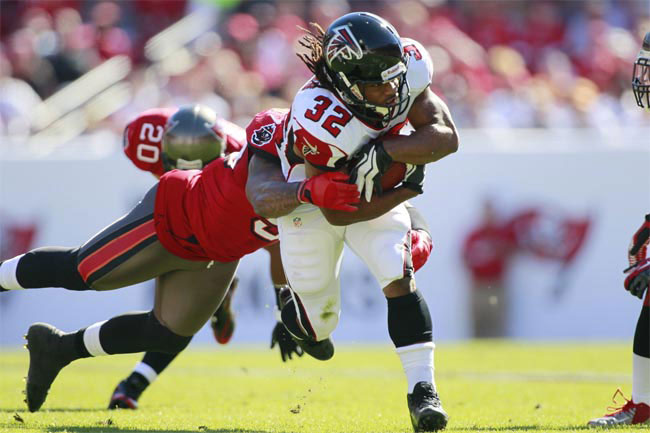 The strong got stronger and the weak got weaker for the most part during week 12 in the NFL, but no team has clinched a playoff berth just yet. The Falcons survived against the pesky Buccaneers 24-23 to increased their NFC South lead to four games over Tampa with a 10-1 record, while the Saints failed to keep pace, losing to the NFC West leading 49ers. The Niners also tightened their grip on their own division as Seattle lost to Miami 24-21. The Giants also stayed two games ahead of the closest competitor in the NFC East by winning against Green Bay. Then over in the AFC, Denver, New England, Houston and Baltimore continued to win, improving their prospects as playoff bids. That’s the overview, but here’s what else went down and what we have to look forward to the rest of the way.

I mentioned just a bit ago that the Pats won this week, but in actuality, it was a bit more severe than that. The Patriots absolutely embarrassed the now 4-7 Jets, raising questions about Rex Ryan’s future as head coach and Mark Sanchez as staring quarterback. Yes, the beatdown was that bad. The Patriots scored three touchdowns in the span of less than two minutes in the second quarter and Sanchez even fumbled after running into his own man. Oh yeah, and that fumble was returned for a score as well.

We already knew (or at least I already knew) that the Jets were overrated, but now we are seeing a Patriots team that could compete for another Super Bowl. At 8-3, they basically have the East in the bag, as they are three games up on next best, Miami. Look for New England to be an AFC favorite come playoff time.

The Saints’ Comeback Hopes May Have Been Dashed by San Fran

After starting 0-4, you just had that feeling that the Saints were going to make their presence felt in this year’s playoff chance and undoubtedly they have. But those dreams of a magical comeback may have been crushed by the West leading Niners, who continue to dominate opponents with one of the league’s best defenses and a top ranked running game.

The loss puts the Saints at 5-6, only one game out of the second wild card spot, but the fact that they are behind three other teams and tied with several others makes it so that they have to be perfect the rest of the way to have a shot. Are they capable of it? Sure. But it certainly doesn’t look good for New Orleans now.

Giants Get Back on Track Against the Pack

After enjoying a five-game winning streak, the Packers looked poised to take control of the NFC North, but not so fast. In came the Giants, who as usual, hadn’t figured out how good they wanted to be until this week. New York turned in its best offense performance of the season, lighting up Green Bay’s defense for 38, solidifying their place in this year’s postseason conversation. With a two game lead in the East, it looks like the NFC with have to contend with the defending champions after all. Come playoff time, the Giants are as dangerous as any team, so don’t count them out.