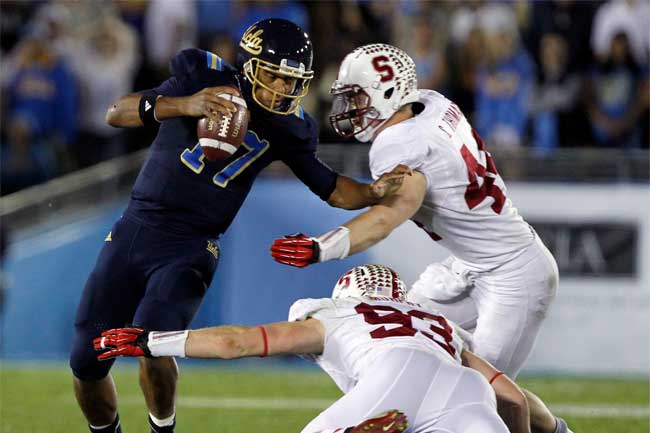 Last Saturday marked the final action of the season for some schools, while others prepare for one last game before Bowl Season kicks off. For twelve teams though, the chance to win a conference championship and make an impression on the BCS rankings still remains.

This weekend, six conferences will crown a champion (new or otherwise), including the SEC, from which many believe #1 Notre Dame’s opponent in the BCS National Championship Game will emerge. CasinoReview takes you on a quick tour of those all-important championship games.

Championship weekend gets underway with the battle for the MAC title in a game that features two sides unbeaten in conference play. Northern Illinois (11-1, 8-0 MAC) wrapped up the West Division ahead of last weekend’s 49-7 drubbing of Eastern Michigan while Kent State (11-1, 8-0 MAC) edged out Bowling Green in the East Division.

A 35-17 Stanford (10-2, 8-1 Pac-12) win over the Bruins last weekend ensured that the Cardinal would host this rematch just six days later. It also confirmed that the much touted #5 Oregon would not head to the championship game, a result of Stanford’s victory over the Ducks. UCLA (9-3, 6-3 Pac-12) fended off USC to get to the championship, despite three divisional losses. The Rose Bowl awaits the winner.

The CUSA Championship Game sees two teams with identical records square off in the first of Saturday’s four title deciders. UCF (9-3, 7-1 CUSA) outlasted East Carolina in the East Division, advancing to the CUSA Championship Game by way of a win over the Pirates. Meanwhile, Tulsa (9-3, 7-1 CUSA) topped the West Division, securing home field advantage by way of a 23-21 win over Central Florida on Nov. 17. The Knights will hope to avenge that defeat with a win on Saturday.

Arguably the biggest game of the weekend, and perhaps the season so far, Alabama (11-1, 7-1 SEC) faces Georgia (11-1, 7-1 SEC) in Atlanta. Both sides arrive at the Georgia Dome with identical records but few expect any result other than an Alabama win. Frontrunners in the polls for much of the season, the Crimson Tide will be looking to forget that loss to Texas A&M and book a place in the BCS Championship Game. Georgia will be looking to defy the naysayers, upsetting the Tide on the way to an unexpected championship. This really is for (nearly) all the marbles.

In a battle between two high-quality sides, Florida State (10-2, 7-1 ACC) edged out Clemson in order to represent the Atlantic Division in the ACC Championship Game. It was a different story in the Coastal Division whose representative, Georgia Tech (6-6, 5-3 ACC), finished behind both North Carolina and Miami (FL), both ineligible for postseason play. Miami’s decision to self-impose ineligibility opened the door for the Yellow Jackets. Both sides arrive in Charlotte on the back of rivalry losses in Week 13.

Odds: The Seminoles head to North Carolina as favorites (-13). The over/under is 61.

As with the ACC, postseason ineligibility has played a significant role in the Big Ten this season. Unbeaten Ohio State and a four-loss Penn State both finished the season above Wisconsin (7-5, 4-4 Big Ten) in the Leaders Division, but it is the Badgers that will head to Indiana on Saturday. NCAA sanctions prevented both the Buckeyes – who would surely have played for the national championship – and the Nittany Lions from playing beyond Week 13. The Badgers will face a

Nebraska (10-2, 7-1 Big Ten) side that bounced back from some early troubles to take the Legends Division ahead of Michigan.