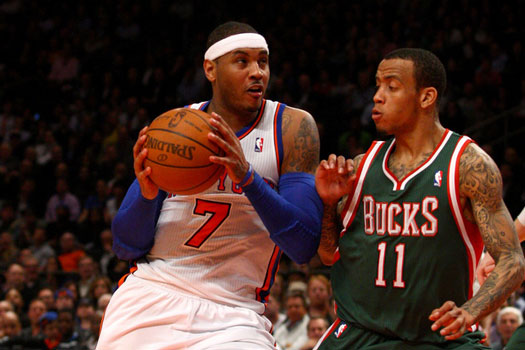 The 11-game slate today in the Association is the biggest one this week, so if you want to get on the ball and jump on some NBA action, today is the day. Here are the quick picks for today’s contests.

The Blazers should beat up on the Wizards today and since Portland only has a three-point edge, this is a pretty easy pick. Go with Portland to get the win and cover -3 to keep the Wizards winless.

The Spurs continue, as always, to play solid team basketball and strung together another nice winning steak. Look for that to continue, but also for Orlando to keep things close, as they play much better at home (4-3 this season). Take Orlando to cover +7.5 today.

The Nets have come out of the gate strong in the East, but the Celtics are appear like they are starting to put something together. Their top-tier defense is returning to form and I expect they’ll play well at home. I like Boston to cover -3.5 in a win.

The Bobcats have impressed many with their fast start, as they have already matched their win total from a year ago, but the Hawks are currently flying under the radar. Atlanta’s won five in a row and considering their history of success against Charlotte, they’ll likely make it six. However, I think the Cats have enough to cover +9 points even on the road.

The Pistons are looking to post back-to-back wins for the first time all year and they’ll have a good chance to do it tonight against a Suns defense that is allowing more than 100 points per game. Considering that Detroit is much better at home, I like the Pistons to win this one by covering -3 points.

Both teams are struggling without their respective All-Stars, but I like Dallas to cover +6.5 on the road. Chicago has really played uninspired at home and O.J. Mayo’s scoring should give Dallas a lift.

Besides the Nets-Celtics clash, this might be the game of the day, pitting two winning East teams up against one another. The Knicks have been one of the big stories early in the season and with all their talent, we know they can score the ball, but the fact is Milwaukee has the best shooting team in the league (48% FGs) and is second in bench scoring with 42.1 points per game coming from reserves. I like the underrated Bucks to cover +2.5 and win outright at home against the Knicks.

Memphis should easily have its way with a Toronto team that is allowing more than 100 points a game, but to cover 10 points is always a tall order. That’s why I like the Raptors to cover +10.5 in the loss today.

Utah has been two different teams at home and on the road this season with a 6-0 record on their home floor and a 2-7 away. Unfortunately for them, today the Jazz are away and against a Hornets squad, who although has struggled, also possesses plenty of young scoring talent. I like the Hornets to win this one outright and cover +3.

It’s been an up-and-down ride for Houston so far this year, as the new-look Rockets are still getting acquainted. OKC should get the job done at home, but I don’t see the Thunder covering 10 points against a capable Rockets squad. Take Houston to cover +10 in a close loss.

The Clippers have lost four of their last five and although they are at home today, they will be dealing with a healing T-Wolves squad that has Kevin Love back in action. Surprisingly, the Clipps are still nine-point favs, but that’s why I like the Wolves here. Take Minnesota to cover +9 on the road.