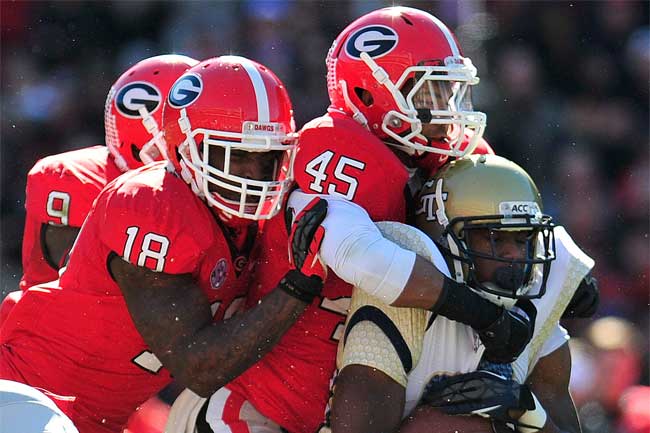 It’s championship weekend in College Football and CasinoReview has the inside track on who’s likely to take home titles and bolster their BCS hopes along the way.

With the two teams battling it out for the Pac-12 championship meeting just one week earlier, it would be easy to dismiss the game as uninteresting and missable. Been there done that. But the Bruins’ trip to The Farm Friday night is anything but.

Odds: Stanford is a 10-point favorite at home. Only Florida State has a larger advantage in any championship game this weekend. The over/under is 52.

Take: Stanford – While this game shouldn’t be written off just because the sides faced off last weekend, it’s hard to see the result being any different. The Cardinal has taken four straight from the Bruins, by an average of nearly 22 points. Take Stanford to cover the spread with the total going under.

If you listen to most, Alabama (11-1, 7-1 SEC) has one more hurdle to leap before heading to Miami to take on Notre Dame in the BCS Championship Game. That has to have Georgia (11-1, 7-1 SEC) seething.

The Bulldogs are not traveling to Atlanta merely to make up the numbers. The side believes it has a real opportunity of knocking off the Crimson Tide and securing its first SEC championship since 2005.

Alabama was victorious the last time these two sides met (2008) but that win snapped a three-game Bulldogs winning streak.

Odds: Alabama is favored (-8) over Georgia, with the over/under at 51.

Take: Alabama – This might not be the cake walk some think it will be but Nick Saban will have his team ready to play in its first SEC title game in three years. The Tide will roll on, covering the spread. Take the total to go over.

Wisconsin (7-5, 4-4 Big Ten) fulfilled bookies’ predictions by winning the depleted Leaders Division in the Big Ten and advancing to the championship game. The Badgers’ path to Indianapolis could be considered less than successful though, what with both Ohio State and Penn State finishing ahead of the Badgers.

Odds: Nebraska is a 2½-point favorite, with the over/under at 48.

Take: Nebraska –The Cornhuskers bettered Wisconsin in September and will do so again, spoiling the Badgers’ hope of two straight titles. Take the Cornhuskers to cover the spread with the total going under.

MAC Championship Game: Both #12 Northern Illinois (11-1, 8-0 MAC) and #17 Kent State (11-1, 8-0 MAC) made some late season BCS noise before heading off to Detroit. The winner of this will truly be the best in the conference, going undefeated in conference play. Take Northern Illinois, winners of five straight and 16 of 19 all-time against Kent State.

CUSA Championship Game: Not the most glamorous of conferences, the CUSA will culminate with a close contest between Central Florida (9-3, 7-1 CUSA) and Tulsa (9-3, 7-1 CUSA), two sides that have played good conference football this season. Take Tulsa, winners of three straight against UCF, with home field advantage.