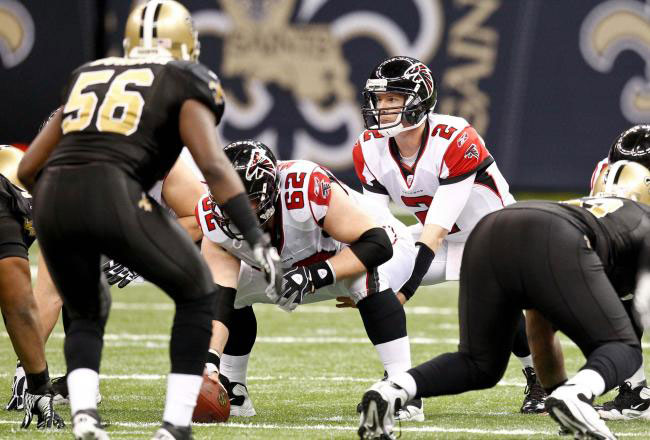 After suffering a devastating loss last week to the 49ers, the Saints season will likely be on the line tonight as they take on the division leading and NFC Conference leading Atlanta Falcons. The Falcons have responded well after losing their first game of the season a couple of weeks back and look poised to clinch the NFC South this week. All they need is a win over New Orleans and a loss from the Buccaneers, who will have a tough game against one of the hottest teams in the league, Denver. Can the Saints win and stay alive? Or will the Falcons assert themselves as the dominant team in the NFC? We will find out tonight.

Of course, the Falcons only loss of the season did come to the Saints, who actually have defeated Atlanta in the last four meetings between the teams. However, that loss was in New Orleans. This time, the Falcons will be at home, where they are 5-0 this season. The Falcons are confident that game was a fluke.

“It’s not like they came out here and won a game,” said Atlanta receiver Roddy White via ESPN.com. He caught seven passes for 114 yards in that contest. “I think we kind of gave it to them.”

The Saints, who have gotten the better of Atlanta lately, know what’s at stake, as they are currently not in playoff position.

“The margin for error is very slight right now. We’ve kind of used up our nine lives,” Saints quarterback Drew Brees said. “So we’ve got to really bear down here and just understand what’s at stake every time we step on the field.”

New Orleans has one of the worst defenses in the league, but managed to hold the Falcons to under 50 rushing yards in the Saints win a few weeks ago. But where the Falcons can really hurt New Orleans is through the air. Atlanta has the 2nd ranked passing attack in the league and the Saints have the third worst pass defense.

The Saints may have been able to hold the Falcons in check at home, but it will be much more difficult on the road and since Atlanta still has a playoff berth to play for along with home field advantage in the postseason, expect the Falcons to play hard, as they look to avenge their one loss this season. I like Atlanta to cover -4 points at home tonight, putting New Orleans even more on the ropes than they already are.