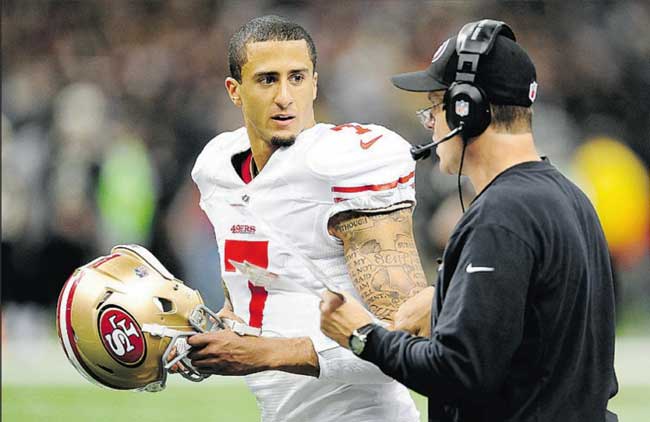 Colin Kaepernick will start for the San Francisco 49ers this Sunday as the team travels to the Gateway City to take on the St. Louis Rams.

The news filtered out of San Francisco’s training ground on Wednesday following an announcement by head coach Jim Harbaugh.

Kaepernick replaced Smith in Week 10 after the latter was injured during a game against the Rams at Candlestick Park. The second year quarterback completed 11 of 17 passes before the game ended in a tie.

With Smith diagnosed with concussion and medically unfit to play, Kaepernick made his first career start against the Bears on Monday Night Football in Week 11. During the game, Kaepernick completed 16 of 23 passes and threw for two touchdowns, as he outdueled fellow backup, Jason Campbell, spelling a concussed Jay Culter. The Niners outplayed the Bears and took the game 32-7.

Following much speculation, Kaepernick made his second start last Sunday against the New Orleans Saints. He completed 16 of 25 passes, tallying a touchdown and a first interception of the season. The Niners won the game 31-21.

Now, the second-year triggerman is set to start on Sunday.

Overall this season, Kaepernick has completed 48 of 74 passes (64.9%) for 680 yards and thrown three touchdowns and one interception. His quarterback rating is 92.92.

In nine games this season, Smith has thrown for 1,731 yards on 152 of 217 passing, with 13 touchdowns and five interceptions. His quarterback rating is 69.83. He was certainly not the happiest person on the sideline this past weekend in New Orleans.

Smith visited with Miami in the offseason whilst the Niners flirted with Peyton Manning but resigned with the Bay Area side to be its starter. Smith may well have been ‘Wally Pipped’ following Harbaugh’s decision to go with Kaepernick, although everybody within the franchise is sticking firmly with the line that both quarterbacks are go-to-guys.

Despite the potential/existing (depending how you look at it) quarterback controversy, San Francisco has moved up in the NFL Futures. The Niners are now favorites (9/4) to take the NFC and 5/1 to win the Super Bowl. Only New England and Houston (both 9/2) have shorter odds.

San Francisco’s defense has given up just 278.4 yards per game, second to Pittsburgh, and is the stingiest in points conceded (14.1 PPG). St. Louis’ 28th ranked offense will be in for a long day.

Offensively, San Francisco leads the league in rushing yards, making up for a low-ranked passing game. That being said, Kaepernick has added some impetus to the Niners’ passing game over the past two weeks. The Rams will find this team tough to stop.

Both sides have fared well against the spread this season, each tallying a 7-4-0 ATS record.

The over/under is 41. The total has gone over in seven Rams games this season, but only five Niner games have exceeded the marker. Four of the last five head-to-head meetings have gone over 41 points.

If San Francisco is victorious in St. Louis – which would mark a fourth win in five games – Colin Kaepernick may just play himself into the starting role permanently, which means Alex Smith could face the trading block come February.